On the table: Leroy 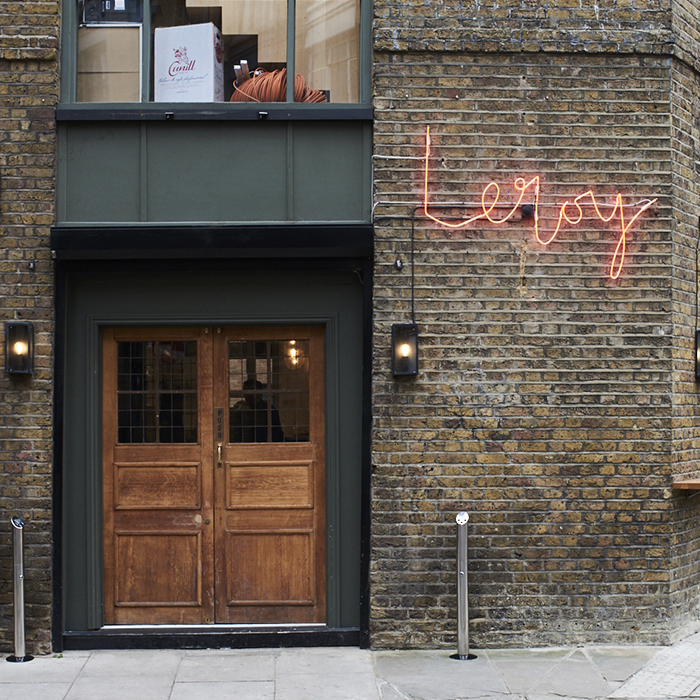 London’s food scene was hit hard when Michelin-starred Ellory shut its doors earlier this year, but – after a short few months – the restaurant’s team was back with their new project, Leroy. We sent Fine Wine Account Manager Fergus Stewart to see whether another star is in the offing

I admire a restaurant which is bold enough to put crisps and dip on a menu. It requires a certain sort of cojones – and that’s just the sort of place that Leroy is. Tucked away down a side alley just off Great Eastern Street, Leroy is the latest project from sommeliers Ed Thaw and Jack Lewens and chef Sam Kamienko, the team behind Michelin-starred Ellory (which is now the site of Bright). Occupying a former wine bar, Leroy is in the heart of what is rapidly becoming London’s culinary epicentre, Shoreditch. Like many hot new London destinations, the emphasis here is on shared plates, with a wide range of wine available by the glass, favouring the low-intervention/natural bent.

After a swift palate-sharpening cocktail, we delved enthusiastically into the menu – enter stage left those crisps and dip. One of the “snacks”, this is not a packet of Walkers and sour-cream-and-chives, but whipped cod’s roe with home-made salted crisps – taramasalata on a different level, smoky and simply delicious. Fresh from the barbecue came quail in a spiced honey sauce, a marriage that worked perfectly with the ideal balance of heat and sweet. A plate of Basque charcuterie completed our first sweep of the menu, making for a promising start.

These accomplished starters gave us a chance to put our whites through their paces – a bottle of 2011 Pierro Chardonnay, returned recently from Australia by a co-diner, was just starting to hit its straps and is the name to go to in Western Australia (alongside the celebrated Art Series from Leeuwin). Sadly my bottle of 2012 Chassagne-Montrachet, Premier Cru, Tête du Clos from Benjamin Leroux was very lightly corked – enough to take away the brilliant aromatics I remember from tasting from cask, but not so overwhelming as to destroy the nervy structure underneath. A wine not to rush on, if you’re lucky enough to have a case. 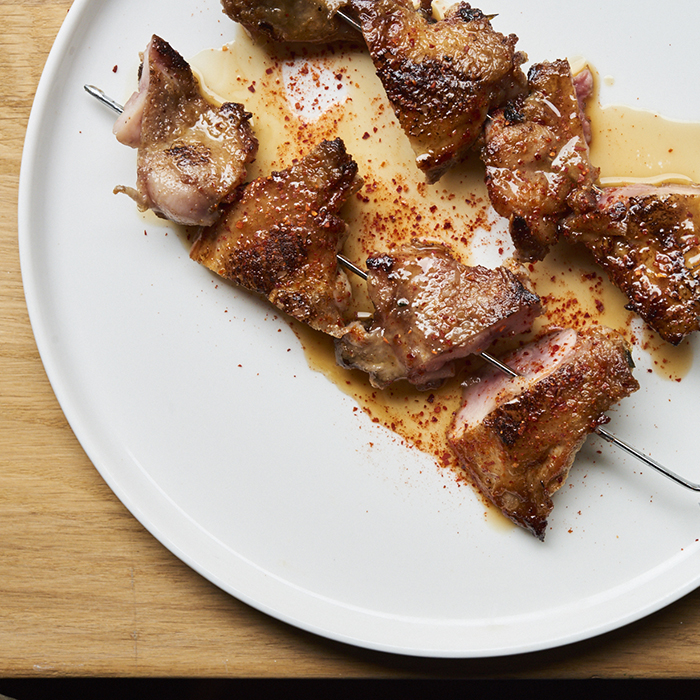 The quail skewers at Leroy

Onto the mains: showing a trencherman’s lack of restraint, we ordered a large portion of the menu. First up was one of the most underrated of our native fish – a Megrim (sometimes offered as Cornish) sole. Paired with an aromatic green peppercorn sauce, this ugly cousin of the Dover has a face only a mother can love, but the same wonderfully textured flesh that falls off the bone. A clever riff on risotto followed in the shape of courgette and basil with spelt, a nod to high summer and one to be repeated at home. Palourde clams with cider and bacon were a perfect marriage of land and sea, with a briney kick from both the shellfish and porcine elements.

Finding wine to match the myriad of flavours is often tricky, but we had an ace up our sleeve in the form of the recently released 2008 Tondonia Gran Reserva Rosado from López de Heredia. Mostly Grenache, with a handful of other classic Rioja grapes, this is aged for an improbable four years in old oak barrels before an additional six years in bottle in the depths of López de Heredia’s stygian cellars. The result is an orangey-pink wonder, with a hint of the classic oxidative qualities of the estate’s whites but a zinging freshness and touch of strawberry fruit. A remarkable wine and one that sang on the night.

A shared Magret duck breast with girolles called for something red and we had just the ticket in the form of a bottle of 2009 Flaccianello from Fontodi. Essentially a “Super Chianti”, this is the pick of the estate’s Sangiovese. Brimming with earth and cherry fruit, I can think of no better match for duck. We ended the night lingering over the dregs and a plate of excellent cheeses – St Nectaire, Comté and Selles sur Cher.

It feels like the team that set their sights so high with Ellory has grown up with Leroy. Each plate offered something just a little bit different – playful yet classic food, plates that didn’t ask too much f you. Ellory aimed for high-art – minimalist cooking that came with expectations; Leroy, however, has toned it down. Everything – from the posh chips ’n’ dip to the service – is more relaxed, more comfortable with and confident in what it does best, and what people want. It may not be destined for Michelin-stardom, but they’ve been there and done that. As, indeed, have we. Leroy effortlessly doles out dishes that are far from simple, but are so brilliantly satisfying – it’s a genre of carefree cooking that is so much better than a star above the door.