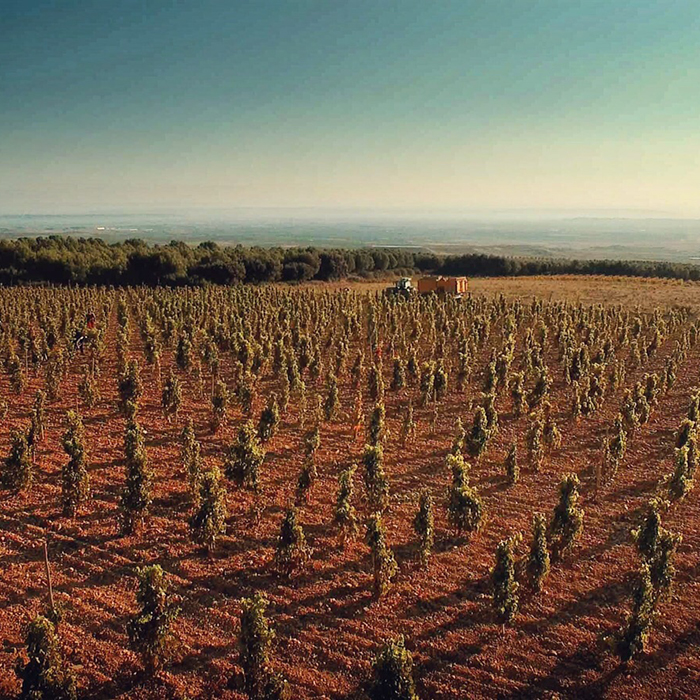 Since prodigal son Álvaro returned to the family business in 1999, Bodegas Palacios Remondo has been transformed. This Rioja estate, perched on the eastern edge of the region, crafts glorious site-driven wines, as Tatiana Humphreys discovered on a recent visit

I’ve travelled along a rocky road with Rioja. At university, the reds were the standard and uninspiring bottles poured at dinner parties. I found myself losing interest in this great region. Yet my feelings have changed since visiting Palacios Remondo in Alfaro where Álvaro Palacios and his team are putting their stamp on the less celebrated area of Rioja Oriental.

Rioja Oriental is the new name for Rioja Baja, rebranded to remove the unflattering Baja (literally “lower”, intended as altitude but all too often taken as quality) from the region’s name. This eastern corner of Rioja is flatter and warmer than the rolling hills of Rioja Alta and Alavesa (the other two subregions) but is nevertheless producing some fantastic wines.

Part of star winemaker Álvaro Palacios’s empire, Palacios Remondo originally belonged to his father. After making a name for himself in Priorat, Álvaro returned to his hometown, Alfaro, to turn his hand to Rioja. The property had previously made table wine from high-yielding Tempranillo vines, mostly sold in Spain. Álvaro, however, has changed all that, focusing on quality over quantity. As with his wines in Priorat, he wants to make wine that represents the land. The wines should evoke the soil, orientation and topography of Alfaro.

The team, powered by Álvaro’s vision, has worked very hard to achieve this. Inspired by traditional viticulture, Álvaro re-grafted all the Tempranillo vines in the enormous La Montesa vineyard with Garnacha, bringing the grape back to its rightful home. This hardy grape variety was historically the red grape of the region, performing better in the very hot, dry climate, while Tempranillo needs more water. He has also remodeled the vine training system on the same principle. Traditionally the vines were left to their own devices, their unruly form known as gobelet or bush vines, but when the vineyard’s purpose was to produce high quantities, cordon training was installed. Álvaro has returned the vineyard to its original state and these bush vines now produce lower yields of higher quality grapes.

Palacios Remondo stands out for giving such importance to the vineyard. So much work has gone into re-grafting and in a few years all the wines will be 100 percent Garnacha. La Montesa is one of the most pristine vineyards I’ve ever seen, and you can taste the sophistication in the wines. It’s all well and good having high-tech kit and new barrels in the winery but if you don’t have quality grapes, you can’t make great wine.

Palacios Remondo certainly does make exceptional wine in myriad forms, all of which are a pleasure to drink with or without food. There’s Placet, a refreshing white made from foudre-fermented Viura (first made by Rafael Palacios), which spends 10 to 11 months on its lees – producing a creamy wine with citrus and orchard-fruit notes. La Montesa and Proprieadad are the flagship reds, with aromas of liquorice, violets, red cherries and smoked wood. Most importantly, each wine took me back to the vineyard, where hard work and care has created something very special.

2015 La Montesa, Crianza, Bodegas Palacios Remondo: This is Rioja – but not as you know it. Made from over 90 percent Garnacha and from the Rioja Oriental at the easternmost point of this region, it is pure, elegant and utterly drinkable. The unique freshness in this wine comes from the fascinating La Montesa vineyard which is planted at 550 metres’ altitude in the foothills of Mt Yerga. In addition to this, the purity and richness of sweet red and black berry fruit is testament to the huge amount of focus and attention that the famed Álvaro Palacios and his team put into each of the vines throughout the growing season. This is a Rioja that will not cloud your senses on the first sip, but instead will leave them invigorated and intrigued.

And for the ultimate taste of Riojan terroir…

As well as the Palacios Remondo wines, Álvaro has started making wines under his own label (Álvaro Palacios) in Alfaro. Valmira is his top wine, a sensational single-vineyard cuvée from vines that are over 85 years old. When swirling the glass, the beautiful garnet-coloured liquid releases elegant aromas of rose petals, thyme, and strawberries, with an undercurrent of earthiness. The elegance of Valmira reminded me of the best Burgundy; a pure expression of a very special site.