On the table: Bright 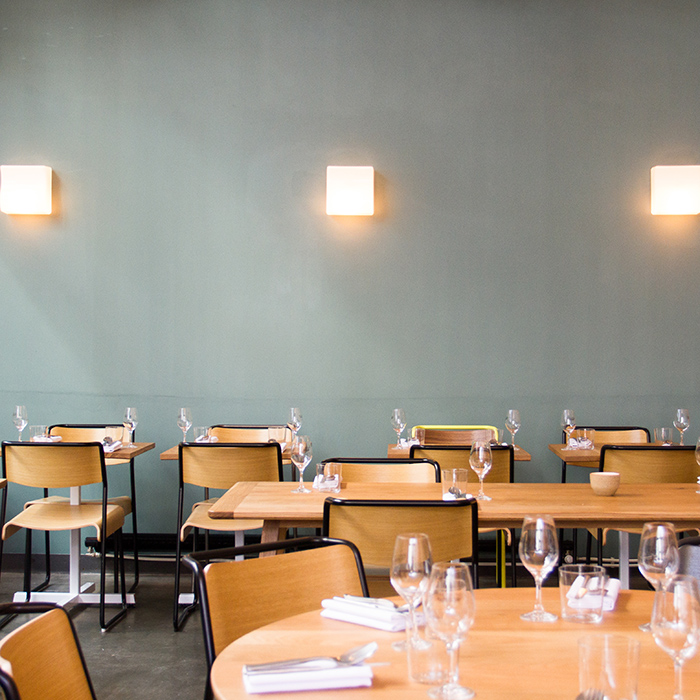 As the team behind P Franco open up their first proper restaurant, Bright, Sophie Thorpe settles in for a long lunch – finding food that is both fun and finessed

The scene at Bright on a Saturday lunchtime tells you a lot about the restaurant. A group of young parents have put the prams to one side, set up iPads for the kids and laid out their vertical tasting of Overnoy – possibly the cult name of the Jura, whose un-sulphured low-intervention wines have gone from off-beat trendy to uber-collectible. The tone (and table) was set.

It’s not surprising that this establishment is already a mecca for the natural wine cohort. Bright is the new restaurant from the team behind Noble Fine Liquor and P. Franco – an east London hotspot which has become known for the quality of guest chefs taking a turn on its induction hobs to create neat, inventive menus that partner its shelves of natural wine.

You may have a sense of déjà-vu arriving at Bright. It is perched at the foot of Netil House in London Fields – a spot which, until early March, was occupied by Michelin-starred Ellory (who in turn have de-camped to Shoreditch, opening a new restaurant, Leroy… and so the merry-go-round goes on).

Some might have seen it as a challenge stepping into Ellory’s long and award-winning shadow, but not so for Chef William Gleave (who became legendary after his P. Franco takeover in 2015-16) and is heading up the kitchen. Bright is shining unashamedly, well, brightly; with – just over a month into service – a signature snack already Insta-famous (the katsu sando – tender fried chicken sandwiched between deliciously, dirtily white sliced bread, served with a dollop of curry-spiked mustard: phwoar).

And that cheeky little snack is the opening gambit for an onslaught of superb dishes. Cured pork loin was deliciously melting and surprisingly delicate; pizza fritta (essentially a savoury doughnut slathered with tomato sauce, mozzarella and parmesan) was a revelation; while al dente spaghetti slid gloriously in amongst its sweet lobster and tomato coating. Sweet grilled onions were cut with rosemary vinegar and the lush lactic acid of creamy sheep’s ricotta. A whole glorious John Dory was cooked to perfection – its potent aïoli a spoon-able joy.

The wine list is Europe-focused, an homage to the boutique, natural producer – with a hefty swathe of organic and biodynamic names. Terribly à la mode, yes, but also delicious, with plenty of bottles from around the £25/30 mark, right up to the top end. Mark-ups seem almost outrageously reasonable – so much so that we started with a bottle of Jérôme Prevost’s Champagne Les Béguines. This low-dosage, utterly rich, powerful yet elegant wine evolved with time in the glass, offering citrus brightness, biscuit richness and spicy minerality, the perfect pairing for a mismatch of dishes from the compact menu.

I came away from a leisurely four-hour lunch feeling delightfully content. This is wonderfully happy food – truly tasty plates that spoke to my cravings, dishes that are just a little bit clever, without being effortfully over-complicated. It’s food that lifts the spirits – and if it doesn’t work, you’ll certainly find a bottle that will.