On the table: Brat 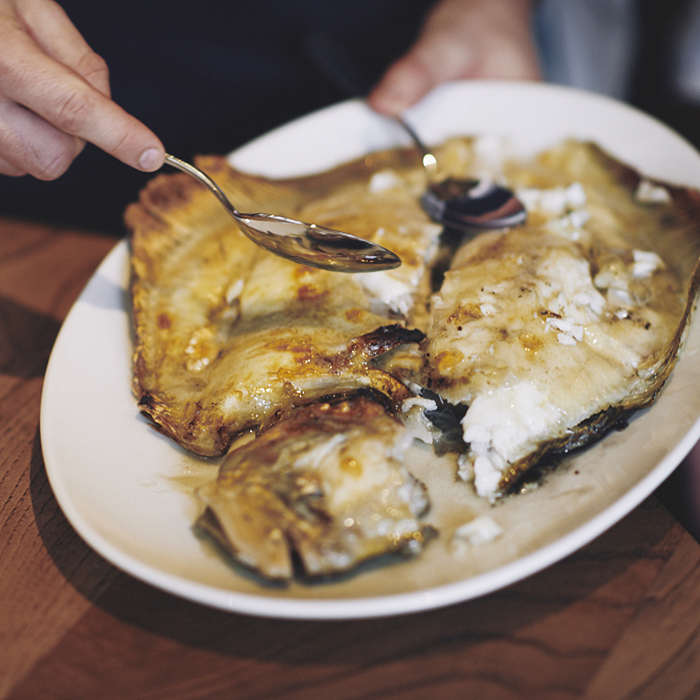 The famous turbot at Brat

Some restaurants seem to be an instant success: Brat – the first opening from Chef Tomos Parry (previously of Kitty Fishers) has been just that. The turbot on its menu has been papped and praised by almost everyone in the business. We sent Tom Cave to sample the famous fish

We used to drive for well over an hour and a half to go out to lunch in North Devon (that was before they built the link road), so an invitation to lunch at Brat in Shoreditch – with an hour’s travel from west London, posed little impediment. Besides, being an avid lover of turbot, I was very eager to get to a restaurant which has already made a name for itself by serving this king of fish in the whole and, by all reports, splendidly.

The restaurant is just off the teeming streets of Shoreditch, up a steep flight of stairs which opens out onto a not-too-large, wood-panelled room, with tall windows most thankfully wide open. The feeling is one of relaxed comfort, with tables close together, no white table cloths and no flunkies; the mission here is to eat, share and enjoy.

My two co-lunchers had arrived just before me. We were the 3.30pm sitting, no matter – it meant we were all the hungrier. I had only envisaged turbot and nothing but turbot; needless to say there was an array of starters and we had been advised to order a good few and share. Fortunately, we all knew each other well enough to dig in and not be too polite, and consensus on what to select was swiftly reached. Among other starters, and at opposing ends of tastes and textures, a very elegant samphire, melon and Carmarthen (the chef’s Welsh) ham dish was offset by a punchy and very hunger-assuaging grilled “loaf” slathered with anchovies.

There was hardly any discussion on the choice of main course. Aided by courteous staff, we were steered to a Whole Turbot (it deserves capitals) which, at £60, between three, seemed admirably fair (a Dover Sole at our end of Jermyn Street will knock you back the same, to feed just one).

Fresh from 30 to 40 minutes’ gentle cooking over coals, constrained neatly in a wire mesh cage, our chosen one was brought, belly-side up, to us by a chef who then ran through the best plan of attack: keep basting with the buttery lemon sauce, spoon out the main part of the fish (they’d removed the backbone), before then seeking out both cheeks (one, no surprise really, much larger than the other), not forgetting the delicious forehead, before finishing by picking away at the match-stick flesh along the outer skeleton – a sticky delight.

The King proved to be as impressive as ever hoped. There was ample for three and we did a pretty good job of devouring every morsel, revelling in the tastes and textures each mouthful brought.

But I mustn’t overlook the wine: ordering by the glass and again shared, we enjoyed Michel Gonet’s Champagne, along with a brace of Sherries – the pick of which was a superb Palo Cortado from Lustau’s Almacenista range. There followed an intriguing Assyrtiko and a pleasing Etna Bianco, while red was represented by a cool bottle of svelte Syrah made by Hervé Souhaut. Goodness, we had puddings too…

The journey back west flew by and I arrived at the Royal Albert Hall in time for a swift No.3 and tonic, before a rousing rendition of Mahler’s Eighth. All in all, a full Sunday afternoon.