On the table: Aquavit 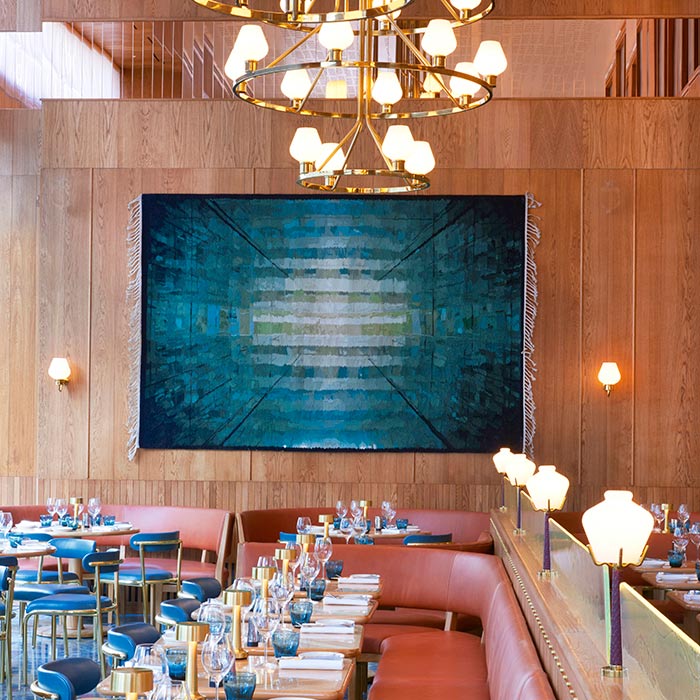 Scouring London’s restaurant scene for its very best offerings, we sent Sophie Thorpe to Aquavit, a transatlantic import that confirms our fixation with all things Nordic

It all began with IKEA. Wheedling its way into our hearts and homes, we were wooed by clean-cut, (deceptively simple) flat-pack designs; by the dream of affordable interior design. But before we knew it, IKEA didn’t sate our Scandi-thirst. Soon we were filling our wardrobes with modern cuts from Malene Birger, Cos or & Other Stories; every bookshelf bore Stieg Larsson’s trilogy; and we snuggled into sofas for our dose of Nordic Noir.

Of course, the clean lines of our tables weren’t left out: the World’s 50 Best Restaurants featured Copenhagen’s Noma (winning the top title no less than four times since 2010) and the remote, fabled Swedish eatery Fäviken, not to mention two further Copenhagen spots – Geranium and Relae. Soon skyr was in the supermarkets and the Nordic invasion was complete. But our obsession hasn’t subsided, as the opening of New York two-star restaurant Aquavit’s London outpost proves.

Positioned in London’s re-developed St James’s Market, Aquavit glows warmly; soft, golden hues contrasting the cool grey tones of the building. Its appearance seems nourishing in itself. Within, it manages to combine the luxury of Mayfair with hygge. The food echoes this spirit: clean, elegant flavours with just the right amount of homeliness.

The Smörgåsbord section of the menu was littered with appealing options: shrimp Skagen (effectively, a posh prawn cocktail) and a delightfully green-tasting mackerel tartare, sorrel, lumpfish roe slipped down woefully easily alongside a half-bottle of Philippe Colin’s Chassagne-Montrachet. A proper wine to start the evening, a fresh pear, mineral-edged nose led to a silky palate with creamy weight and lush fruit. The appetite sharpened, I tucked into the bread basket: a treacly rye, a sumptuous sourdough and some irresistible crispbread littered with fennel and caraway seeds.

My crab, rye brioche, fennel starter was wonderful. The rye brioche was revolutionary – earthy and warm, with the lightest toasting; while the sweetness of the generous pile of crab was countered by the sourness and crunch of pickled fennel. My friend gave me a reluctant mouthful of lobster, Jerusalem artichokes, bitter leaves – a truly impressive amount of lobster meat lurking among bright radicchio and watercress with roasted hunks of Jerusalem artichoke.

As the Chassagne ran out (the supposed wisdom of a half-bottle rapidly seeming a frightful error), we moved onto a bottle of Crittenden Estate’s Mornington Peninsula Pinot Noir. It stood up well to my friend’s monkfish, Sandjeford sauce, trout roe, fennel. It was restrained enough to handle the meaty fish but had enough juicy fruit to cut through my veal cheek, dill, salt-baked onions. I barely got a look-in on the monkfish, which I took as a good sign. The veal cheek was unctuous – meltingly fatty in all the right ways, served next to a soothing mound of silky, creamy mashed potato that I could not get enough of. There was the crunch and sweetness of the salt-baked onions while the freshness of the dill sauce lifted the whole affair.

While I’d consumed enough to feed a family of four, I felt smugly healthy – there’s an impression of “cleanliness” at Aquavit; a sense of virtuousness. The appearance of simplicity, in the use of fine produce, purity of flavours and the herbal tint applied to most dishes, makes the food feel almost un-indulgent. Maybe it was the wine, but I left – I’m sure – with a sleeker profile, worthy of the chic-est Scandinavian design.

And so the Nordic incursion continues: at least when it comes to Aquavit, it’s a welcome assault.

We are hosting a series of wine dinners at Aquavit, the first of which is being held on 6th February. Find out more about Aquavit’s events here.

One Response to “On the table: Aquavit”