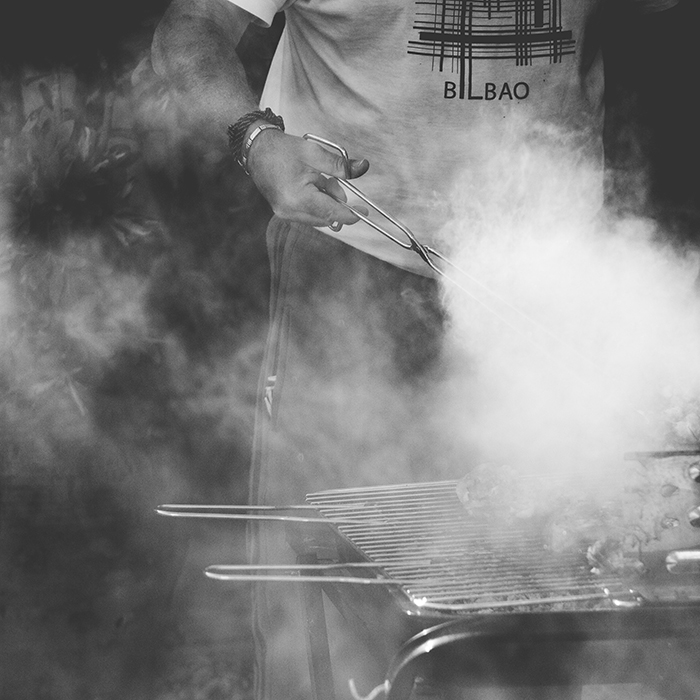 As the heatwave continues, our Head Chef Stewart Turner offers a recipe to make the most of these blissful barbecue days, with a showstopping lamb dish

Planning a barbecue, or any other alfresco cooking or dinning, is normally a lottery in the British summer, with the best-laid plans resulting in an indoor picnic on the rug in the front room. Not this year, though: what an amazing summer it has been, and the coals have been burning long into the night. I’m a massive fan of cooking over an open flame (as is a lot of London, judging by the number of restaurants that are opening dedicated to cooking over charcoal). In fact, I’m often out at the barbecue, come rain or shine, so this year has been a real pleasure. When barbecuing, I like to really push the boat out and focus on one super ingredient rather than doing the usual fodder of chicken, sausages and burgers. This is a real showstopper and inspired by a recent visit to The Barbary, a restaurant which pays homage to the cuisine of north Africa.

For the spice rub:

For the tahini sauce:

Make the spice rub. Toast the cumin seeds, peppercorns and coriander seeds in a low oven until lightly toasted and fragrant. Grind in a spice grinder (or pestle and mortar) and mix with the remaining rub ingredients.

Spread the rub evenly over the entire surface of the butterflied lamb and rub in well. Cover loosely with cling film and leave to marinate for at least two hours, or overnight in the fridge if possible.

Preheat the barbecue until it’s nice and hot. If using charcoal, make sure you add plenty as it will be cooking for quite a while. When it is ready, add the lamb, fat-side down, and cook on a high heat for five to eight minutes until well browned. Turn over and brown the other side, for about the same amount of time.

Lift the grill to its highest setting (ie furthest away from the heat) if you can and move the coals to the sides of the barbecue to reduce the heat under the meat and cook more gently for 30 to 40 minutes, turning occasionally. (This will give you a medium rare to medium finish, cook for a little longer if you prefer your meat more well-cooked.) Remove the lamb to a large board and cover tightly with foil. Leave to rest for 10 to 15 minutes.

For the sauce, whisk the tahini, garlic, cumin, harissa and the coriander into the yogurt. Season with the lemon juice and a little salt, place in a dish and sprinkle the sumac over the top.

Cut the lamb into thick slices and serve with the sauce, falafels (see below) and a large salad.

Heat a tablespoon of oil in a small pan. Fry the onion over a medium heat for three or four minutes until softened. Add the garlic and spices, fry for a further two minutes and remove from the heat.

Blitz the broad beans in a food processor. Add the sautéed onion, garlic and spice mix, then blitz together. Place in a large mixing bowl, add the mixed herbs, lemon zest and mix well. Taste and season with salt and pepper. Add the egg and mix together, rain in enough gram flour just to bring the mix together – don’t use too much flour or they will become too dry.

Chill the mix for about 30 minutes, then form into walnut-sized balls. Deep fry in hot oil (about 160°C) until crisp and golden. Drain on kitchen paper, season with sea salt and serve immediately.

Any number of wines would work with this recipe: try any of our five barbecue-friendly reds, or Hewitson’s Baby Bush Mourvèdre and our Own Selection Australian Shiraz (both of which are currently discounted by 20 percent in our Summer Sale).