Game on: a warming winter recipe 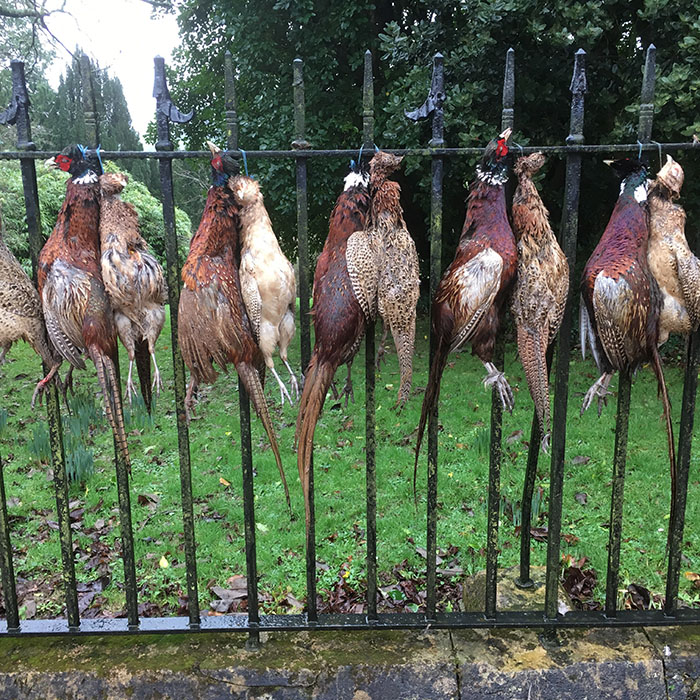 Ahead of our Fur and Feathers dinner this Friday, Head Chef Stewart Turner proposes a seasonal dish to bring together the very best of this inherently familial pursuit

As February approaches we prepare to say goodbye to the game season for another year, and look forward to what the spring has to offer. Already early forced rhubarb and blood oranges have made an appearance in the kitchen – a very welcome sight, full of vibrant colour and flavours, helping to dispel those January blues.

So before we put this month to bed – let us bring you one last January recipe in homage to the mighty game. A trio of game in butter puff pastry, as will be served at our fur and feathers dinner on Friday 2nd February. A celebration of all things wild, it is hosted by the dazzling duo of Tom and Alice – our resident game aficionados, and two generations of the Cave family to work for Berry Bros. & Rudd – and will be a cracking way to say farewell until the Glorious Twelfth.

Heat a splash of olive oil in a frying pan and fry the wild mushrooms, when they start to colour add the butter, shallot, garlic and thyme, lower the heat and cook for a couple of minutes until they are golden. Season to taste with salt and freshly ground pepper.

Remove from the heat and blitz in a food processor until finely chopped. In a bowl crumble the haggis, mix in the chopped mushrooms, parsley and chives. Set aside to cool.

Lay the Parma ham out on some cling film – still attached to the roll, overlap each slice 3×2 with the narrow end nearest to you, spread the mushroom and haggis mix over the ham, creating a thin, even layer.

Place the pheasant breast on the edge of the ham – top to tail, place the venison on top of the pheasant breast and finish with the duck breasts. Using the edge of the cling film, carefully draw the layer of ham over and around the meat, roll into a sausage shape, twisting the ends of the cling film as you do, to form a tight log. Chill for about an hour.

On a lightly-floured surface, roll the pastry to a rectangle a little larger than a magazine, and trim the edges to neaten. Carefully unwrap the game roll and place in the middle of the pastry.

Fold over the bottom half of the pastry. Lightly brush the rest of the sheet with beaten egg. Roll over, so the pastry encases the game with a slight overlap then press this together to seal. Neatly fold under the shorter edges to create a parcel. Place on a tray lined with greaseproof paper making sure the seal is on the bottom and brush all over with beaten egg yolk. Chill for at least an hour.

Once chilled, using the back of a knife, mark the pastry, being careful not to cut all the way through. Heat oven to 200˚C.

Heat a baking tray until hot, then lift the greaseproof paper and wellington onto the tray and bake for about 25 minutes (medium) until the pastry is golden and a skewer when placed in the centre for thirty seconds is warm to the touch (press to the lip). Remove from the oven and rest for about five minutes then cut off the ends of the pastry to let out a bit of heat and rest in a warm place for a further 15 minutes

WINE MATCH: TRY IT WITH…

Tom and Alice Cave will be matching a stunning selection of wines to all dishes served on the evening. For this, the main event, they have chosen the following:

“We’ve selected a trio of reliable reds (which, as it happens, all come from France) to complement Chef’s tasty creation.

From Bordeaux, Ch. Haut Bailly reached its modern-era zenith with the superb 2005 vintage which, while still youthful, will be drinking beautifully, having been decanted in good time. Over to Burgundy and a 2003, an unsuccessful vintage for some, but in the hands of a wine-grower as fastidious as M. Serafin we can be assured of a wine that won’t have wilted from the summer’s searing heat and will show fine, mature Pinot Noir characteristics. The 1999 Côte Rôtie is something of a treat – a fully mature northern Rhône from one of the region’s masters, alluring and animal, this might just pip the other two as this course’s ‘best match’.” Tom Cave

For tickets and further details of our Fur and Feathers dinner on Friday 2nd February, see here.