On the table: Typing Room 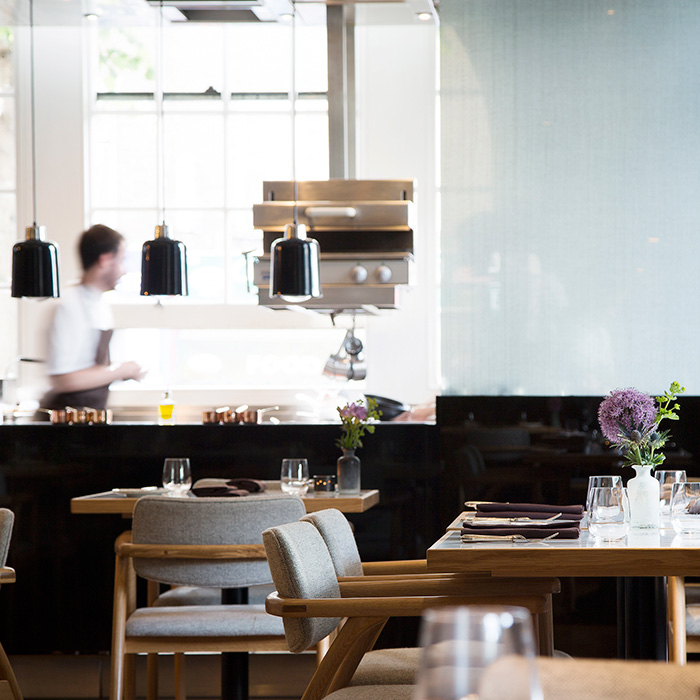 This month we sent Adam Holden out of his comfort zone, forcing him to abandon the city centre to seek out one of East London’s very best restaurants – Bethnal Green’s much-acclaimed Typing Room.

There’s been a marked shift in the London food and drink scene in the last 10 years or so, a seemingly unstoppable march towards east London by ambitious chefs, mixologists, craft brewers and distillers. What was once considered frontier country is now firmly on the map as a culinary destination. But if, like me, you find yourself a confirmed, indeed dedicated, affiliate of the “uncool” it might seem as though it’s all a bit trendy industrial chic. Uncool though I may be, I can’t ignore the praise being heaped on East London eateries so I combed by beard, applied some skinny jeans and headed over to Typing Room at Bethnal Green Town Hall to see what all the fuss is about.

Typing Room was Nuno Mendes’s Viajante before he made tracks for Chiltern Firehouse. These days it’s run by one Lee Westcott, who I thought bore more than a passing resemblance to Jake Gyllenhaal, though my fellow diners weren’t so convinced. When I think East London chic, I think exposed ducting, brickwork, uncomfortable Scandinavian furniture, white wash. In short; stark. Typing Room is a pleasant surprise, the dining room stylishly minimal and unfussy but atmospheric and actually quite cosy. I’m fairly certain the furniture is Scandinavian but it’s very comfortable. The kitchen is open, which I always think is very brave or just plain masochism, but the chatter and clatter from the team there adds to the atmosphere rather than creating a wall of noise.

Being wine merchants by trade (and in spirit) the wine list is clearly a focus but, also being wine merchants, the question of corkage is inevitably asked; the opportunity to liberate something from the cellar for such an occasion is always welcome. Typing Room very agreeably offer corkage at £25 per bottle so between the four of us dining we’d come up with 2003 Meursault, Charmes from Coche-Dury and 2001 Morey, 1er Cru, Clos de la Bussière from Roumier.

The list is extensive though and it’s rude not to honour the sommelier by selecting something from their body of work, so we started with Galician Albariño Tras da Viña from Zarate (delicious, saline but with a leesy creaminess). This accompanied a line-up of amuse-bouches (somewhat less pompously described as “snacks”) from which the taramasalata on crispy cod skin required every bite to be savoured and the oyster leaf left an indelible imprint on my psyche; yes, it actually does taste like oyster (and, as Lee told us, they are just as expensive). The bread, which they make fresh for the lunch service and then again ahead of the dinner service, is a springy and aromatic rye sourdough, accompanied by a dangerously addictive marmite butter and not to be missed. 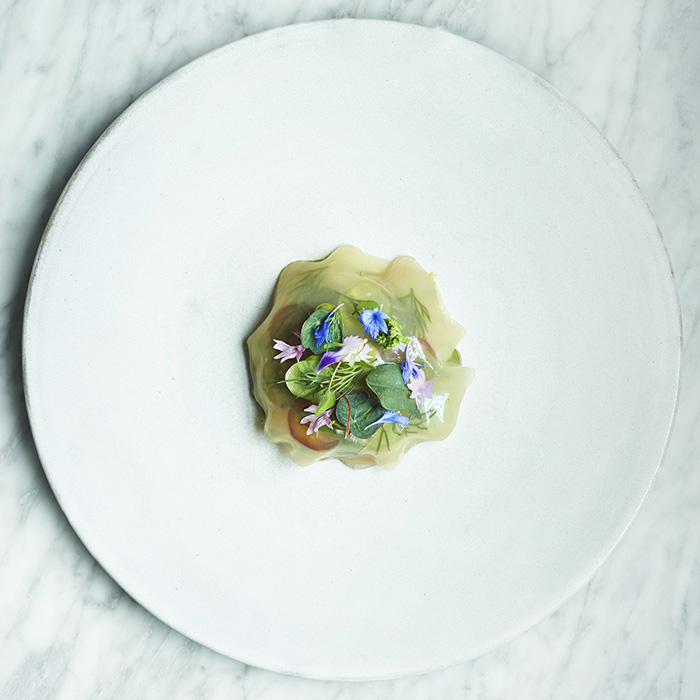 We opted for the five-course tasting menu (£65) but we augmented it with the optional smoked eel course (£12 supplement), which I loved, but divided opinion: just to be clear, it really is smoky. By this point we had moved on to the Coche, a great wine but it wasn’t quite singing, nevertheless it showed fine, elegant and fresh, particularly in the context of the 2003 vintage.

The Roumier paired well with the richly unctuous and tender veal sweetbreads, being deft enough to match the subtle, creamy flavour – just earthy enough to ally themselves with the umami of the girolles. But, like the Coche, this wasn’t in its finest voice either, a fact which I put down to the oppressive, humid conditions on the day.

We shared a couple of cheese boards (another £10 supplement) which was a small but perfectly formed selection of in season, perfectly ripe, British cheeses – just a taste of each, which by this point was plenty. Enthusiasm having got the better of us we ordered a bottle of 2007 Les Paradetes, Conca de Barberà from Cataluña, which has natural credentials (a theme of the list). I’ll admit that this was probably unnecessary, and there is a degree of haze which falls on the rest of the evening, but then it’s also testament to just how much we were enjoying ourselves.

Dessert was an eye-indulging combination of dill and apple ice creams and frozen sheep’s milk yoghurt, the granular appearance of the dill sort of bubbled up on the plate in a chlorophyll-rich green. It’s a wonderfully fresh way to finish the meal, the old skinny jeans getting skinnier by the minute. Coffee is accompanied by a plethora of petits délices which it would have been rude not to tuck away. And so, no skinny jeans for me for some time I think, but on the strength of this performance I’ll be heading back east at the earliest opportunity.