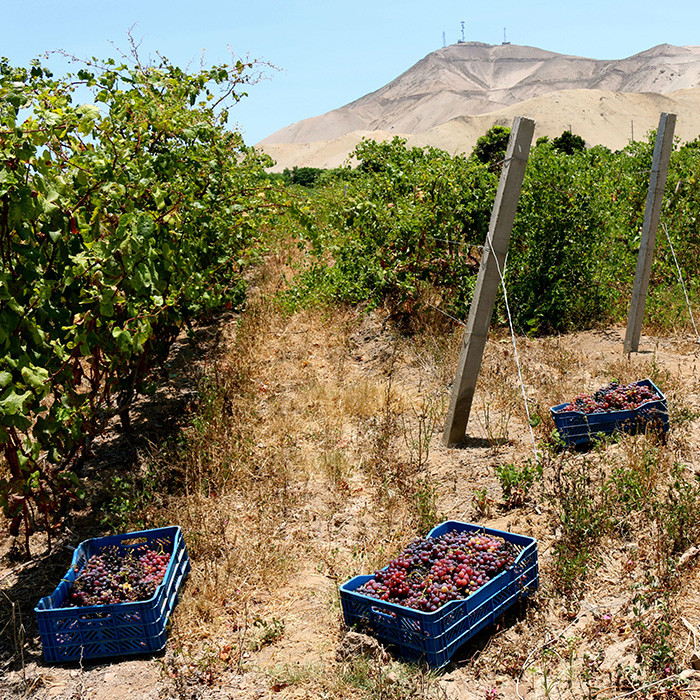 Drinks writer Amanda Barnes is undergoing a mammoth project to capture the wine world as it stands today, in 80 harvests. Here she reports from Peru, a historic producer knocked down by its colonial ruler, and home to much, much more than Pisco.

It might not be the first wine-producing country you think of in South America, but Peru is in fact the oldest. The Spanish conquistadors arrived in the 1530s and, barely a decade later, they planted their own vines at the very epicentre of the Incan empire: in the region of Cusco, home to Machu Picchu.

While the natives were used to living in the highlands, the sea-dwelling Spaniards soon felt the effects of working at over 3,000 metres’ altitude. They brought their newly-planted vines down a couple of thousand meters to the less dizzying region of Ica, now the heartland of Peruvian wine.

Nestled on the 14th parallel, Ica is a warm, semi-desert region surrounded by sand dunes and watered by mountain rivers which are guided by ancient Incan channels. Vine-growing in Ica was easy but over the passing centuries, the industry was dealt many severe blows.

Time and time again, earthquakes and war jilted production, however the biggest obstacle was the many restrictions put in place by the Spanish Crown from the late 16th century onwards. As the popularity of Peruvian wine grew, the colony’s imports of Spanish wine dipped, much to its mother country’s jealousy. Eventually Spain banned the very wine production it had started less than a century before. One way around the ban was to distill the fruit from their vines, making aguardiente, and so Peruvian viticulture started a new chapter – that of Pisco.

By the time the ban was lifted in the 18th century, Pisco had taken the place of wine production. That didn’t perturb a handful of producers though who took up winemaking again, and slowly, but steadily, the industry began to recover. Today the biggest challenge faced by Peruvian wine producers is competition. Tomatoes, asparagus and table grapes are all far more lucrative, and neighbouring Chile’s wine industry has elbowed in on the shelf space in the domestic market. But that doesn’t mean Peru’s vintners are giving in without a fight.

The last decade has seen a renewed energy in winemaking, and state investment in the Pisco industry has given producers the added capital to restart fine wine production. After decades of testing a hodgepodge of international grape varieties, producers have honed in on those that best suit the sun-drenched climate. International varieties that thrive are resilient thick-skinned grapes like Tannat, Petit Verdot, Alicante Bouschet and Ancellotta – those which ripen into rich, full wines that have been softened by the Ica sunshine.

The other varieties that have flourished in the climate are, of course, those that have stood the test of time and adapted to their home: the Pisco grapes. The most exciting revolution happening right now in Peruvian winemaking is the renaissance of these varieties in wine form. Old pergola and goblet-trained vines have lowered their yields with age and now that winemakers have identified some of the best spots and soils among the widespread vineyards, there is potential for exciting, native Peruvian wines. The trendiest restaurants in Lima are now stocking unique wines made from Quebranta and Albilla.

If this is where Peruvian wine is now, where is it heading in the near future? The answer is most likely upwards. While old vines will still have their place in Ica and lower lands, new plantations and explorations are looking to the hillsides once again; although not for the same reasons as the original settlers. Increasingly expensive land prices and fierce competition for limited water supplies is forcing producers to look for sites beyond Ica. The cheaper highlands have water aplenty and benefit from cooler temperatures. The result should be a crop of fresher wines better suited to Peru’s own aromatic cuisine.

Is Peru going to reclaim its empire in winemaking? Not yet, but don’t cast it off as a relic either.

Amanda Barnes is travelling around the world in 80 harvests, find out more about her project and follow her journey here.

2 Responses to “From deepest, darkest Peru”