From our kitchen: patriotic spears 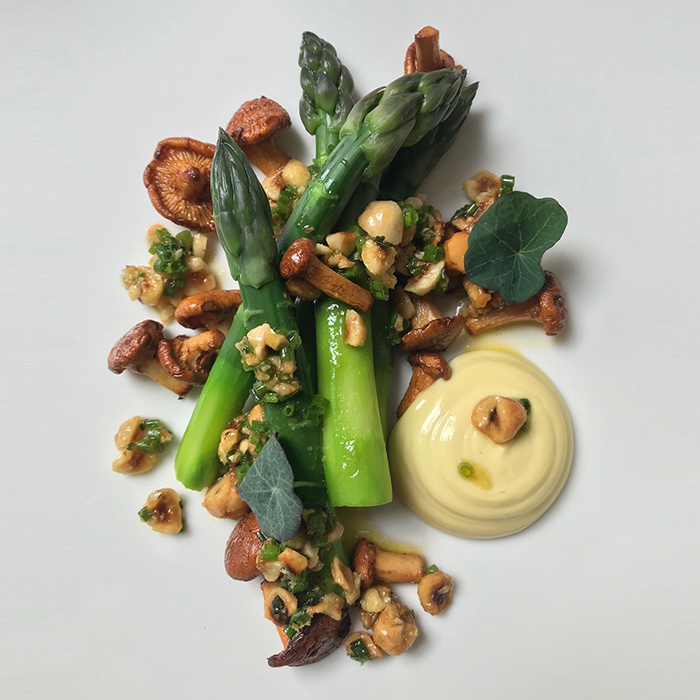 To celebrate English Wine Week, our Head Chef Stewart Turner has rustled up an irresistible recipe that makes the most of the season’s best ingredients: asparagus and girolles

It’s that time of year when our focus turns to that quintessentially British ingredient: asparagus. As I’ve said many times before, it is possibly our greatest seasonal product and unsurpassed anywhere else in the world. This year has been the first that we have seen white asparagus join the purple and green varieties coming out of the Wye Valley – a slightly acquired taste but beautiful none the less.

To coincide with English Wine Week (although I’m cutting it a bit fine), I thought of doing a dish with asparagus and St George’s mushrooms – so called as they traditionally make their seasonal appearance on St George’s Day and run through until mid to late June. After all, what better way to celebrate English wine than with an ingredient named after our patron saint? Alas this year they have failed to flourish to the end of May: I think the “beast from the east” has claimed another victim. The changing weather this year has really affected the growing season and cold snaps have brought an early end to one of the nicest spring mushrooms. Luckily, however, the recent warm weather has seen an early flush of girolles, so I’ve paired the asparagus with these instead. The earthiness of the mushrooms and smoked mayo help to slightly temper the greenness of the asparagus, which can make it tricky to match with wine.

Cook the asparagus in plenty of boiling salted water until just tender and refresh in iced water. Drain well and set aside. Lightly crush the toasted hazelnuts and combine with the Parmesan, oil and chives; then season to taste.

Heat a frying pan over a medium heat and fry the girolles in a splash of oil. Season with salt and freshly ground pepper. As they start to colour add a knob of butter and reduce the heat. Continue to cook for a couple of minutes, then remove from the heat and set aside.

Arrange the asparagus on serving plates, dress with the hazelnut pesto and place a blob of mayo alongside. Scatter over the girolles and serve.

Place the egg yolks, cider vinegar and sea salt in a food processer and blitz to combine. With the machine running slowly, trickle in the oil (don’t add the oil too quickly or the mayonnaise will split). If it starts to look a bit thick, add a couple of drops of water. Once all the oil is added, taste and adjust the seasoning. Refrigerate until needed.

We suggest a magnum of 2007 Nyetimber, Blanc de Blancs (why not?). The richness of this superb sparkling wine should stand up to the many flavours in this dish, with its earthiness matching that of the girolles.