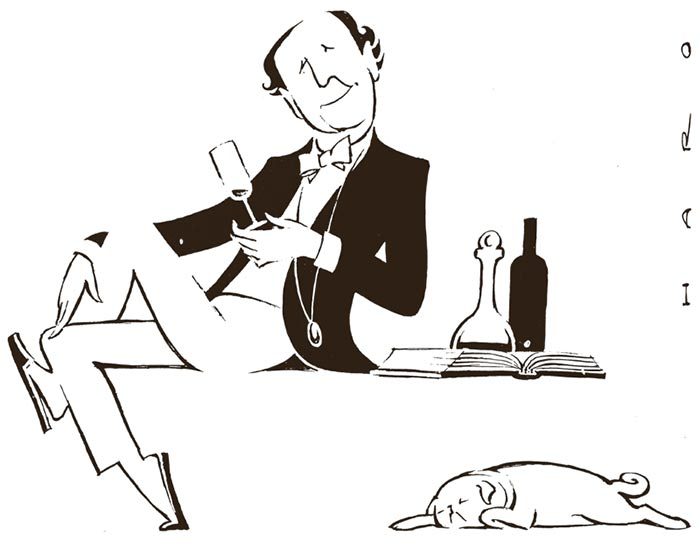 Responding to Will Lyons’s article, Chairman Simon Berry argues that to discover the future of wine, one need look only to its past

When I took over the editorship of Number Three magazine from my father in the early 1980s, I persuaded him to write a regular column. Entitled, not very imaginatively, “Then & Now”, it gave him the chance to look back at his early years in the wine trade and compare them with current times. He took the brief slightly further than I had intended, starting with the summer of 1921 when he was only six years old, but I didn’t complain. I had always wanted these articles to form the basis of his autobiography, and by starting so early, when the business was still controlled by his father Francis, and Francis’s second cousin Charles Walter, we were off to a head start. Besides, there was nothing he enjoyed more than a good rail against modern times, and by allowing him more of a run up, as it were, his columns became more entertaining. Very often the wine trade only played a cursory role in the column as he took aim at such diverse targets as money (the source of all evil so far as he was concerned), people’s behaviour on trains, or the galloping increase in the universal usage of Christian names.

In the below article, Will Lyons writes with great insight on the future of wine. I therefore find myself fulfilling the role of the older statesman, much as my father did 35 years ago – which seems very wrong to me, somehow. Especially as I’m approaching the subject from a diametrically different direction from his: the modern world doesn’t irritate me or fill me full of doom and gloom. I don’t believe that we’re hurtling towards hell in a hand cart. The older generation has always been convinced that the world stopped improving roughly when they were about 25 years old. They’ve always been wrong before, and I see no reason why they should suddenly be right now.

Take the internet, for example. We first had a website in 1994 – before Google, or Amazon, were even dreamt of – and I suspect many would regard the creation of bbr.com as the single biggest change in my years in the company. But in many ways the website merely allowed us to carry on doing what, as a company, we had always done. Part of being a wine merchant is communication: telling our customers about new wines we’ve discovered, recommending particular favourites, and allowing them to make up their own minds which of the many thousands of wines would be perfect for a particular occasion. If anything, the 1990s were a period of consolidation, and the wine trade was heading towards a time of less choice. Wine was too complicated, sang our critics, and the “traditional trade” was perpetuating the mystery rather than shining the bright light of clarity upon the situation.

Wine has always been about variety, so far as I am concerned – that’s the endless fascination and fun of it. I can never answer the inevitable “Desert Island Wine” question (“if you had to choose one wine to drink for the rest of your life…”) for the simple reason that I’d grow bored very quickly, even if that wine was the finest known to mankind. Give me choice and I’m happy. And the internet allowed us to continue to promote choice. The “architecture” of a good site organises the variety, and makes it easier to choose without narrowing the choice itself. We can, as a result, carry on being wine merchants in the purest sense of the term. The media will undoubtedly change, but the message remains the same.

In the same way, the Company’s move towards trading wine – “broking” as it became known – was possibly the innovation that was met with more resistance than any other in my time. (I was the only member of the Board with a computer in 1994, so the creation of our website largely passed under the radar!) The idea of the company trading in wine, as opposed to buying for stock and selling to drink, seemed terrifyingly revolutionary to the Board at the time. Part of me sympathises – I strongly believe that wine is supposed to be drunk, and that “wine investment” should be no more than a diversion, or a means of financing future purchases. However, by the early 1990s, it was becoming clear that the world was changing. The price of mature wine was increasing dramatically, mainly driven by an expanding universe of demand set against a slowly diminishing universe of supply. As a result, the opportunity for investment was greater than it ever had been, and we were left with the dilemma of whether or not we should join the mêlée, or, Canute-like, remain resolutely aloof

The older members of the Board were adamant: this was something we had never done before, and as a result we should not start doing it now. We had survived for almost 300 years without sullying ourselves with this form of trading, after all.

Except we hadn’t. One of our price lists from the 1920s was produced, and there, printed on every fourth page, or thereabouts, was a phrase which won the day for those supporting this “new” activity; “Small quantities of old wines are constantly passing through our hands. Particulars on application”. In other words: we had done it before, and therefore there was no reason why we shouldn’t do it again.

The wine trade, after all, is one of the oldest professions. It also has a long life cycle. The composition of a vineyard is determined from geological activity that has evolved over millennia. One generation will buy a property which will be planted and replanted over hundreds of years. A grandfather might plant vines which will produce their best grapes for his children, and the bottles may only mature in his grandchildrens’ lifetime. Family businesses, too, tend to remember the distant past and consider the distant future. We notice slower evolutions.

Fashion, as a result, plays a different role in our thinking. In my lifetime I have witnessed the emergence of “New World” wine regions – but how many are really new? Australian vineyards were planted by the earliest settlers in the 18th-century; Robert Louis Stevenson was writing about the wines of the Napa Valley in 1880. There are only a handful of estates in Bordeaux that were established before the earliest South African vineyard. If we were to launch a range of wines from Georgia (the former Soviet republic, not the Southern US State) we would probably be considered avant-garde, but evidence shows that the South Caucasus might well have been the first place to have fermented grapes and establish a wine culture. There are new winegrowing regions, of course – New Zealand didn’t even feature in the first edition of Hugh Johnson’s World Atlas of Wine in 1971. Science has enabled many more places on Earth to grow excellent winemaking grapes, and a growing international thirst has demanded it. What is impossible, however, is to trace a neat lineal progression from Europe to the rest of the world – from an Old World to a New.

Speaking of the growing international thirst – surely, many would argue, we are seeing huge changes in potential markets for wine? Well, up to a point, Lord Copper. China is certainly a strong influence in the wine world today, to an extent that was unimaginable when I started in the trade. But consider this: when we opened our office in Hong Kong in 1999, it took 13 hours to travel from Heathrow to Chek Lap Kok. Almost exactly a century before we had opened an office in Inverness. The fastest train between London and Inverness in 1899, via Aberdeen, also took 13 hours. So which outpost was more remote from Headquarters? And haven’t there always been new markets to conquer?

When the Widow Bourne founded our company in 1698, she sold astonishingly expensive tea to extremely wealthy Londoners. All of that tea would have come from China. Today, we sometimes sell astonishingly expensive wine to extremely wealthy citizens of Beijing or Shanghai. The pendulum has swung so far that it is exactly opposite its resting point. One thing is certain: it will continue to swing, in one direction or the other.

Fundamentally, the wine trade, and Berry Bros. & Rudd, revolves around one, unchanging question: is it good to drink? That was the same when this magazine was first conceived, or when the Widow Bourne founded her shop on St James’s Street in the 17th century. And it will be the same, I have no doubt, for generations to come.

This article was originally published in No.3.