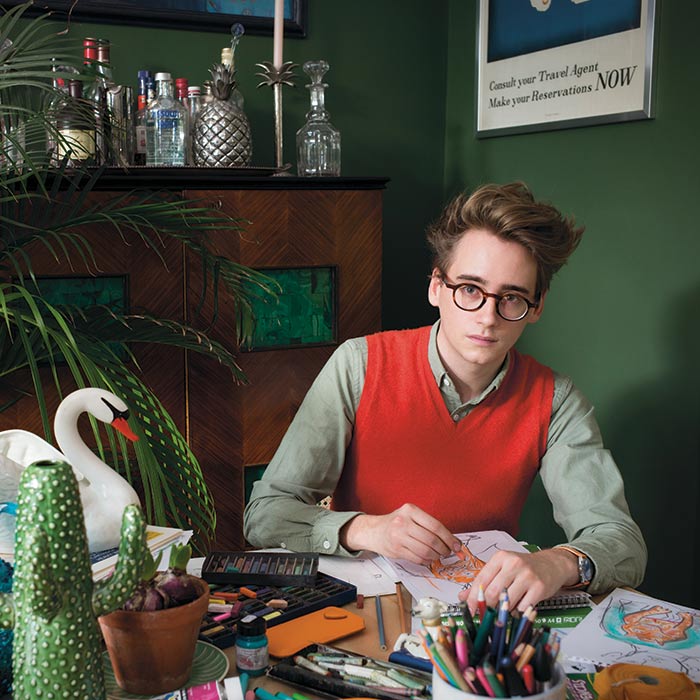 Luke Edward Hall, the 20-something designer and illustrator, is the man behind our latest Good Ordinary Claret label. Here, Emily Miles talks to him about the collaboration, his influences and where he’s headed next

As Luke Edward Hall pads around his Camden flat in stocking-clad feet, shuffling through stacks of paper to show me his sketches for the Good Ordinary Claret label, it seems hard to believe that this is a 27-year-old with the design world at his feet. He is ridiculously fresh-faced, earnest, stylishly bespectacled and uses the word “fun” more than anyone I’ve ever encountered.

The artist-come-interior decorator, dubbed a “wunderkind” by British Vogue, has just completed his designs for Berry Bros. & Rudd – a project which, he says, was “so exciting; so much fun to do”. Edward Hall follows in the footsteps of Sir Paul Smith, whose sell-out “LOVE” label was released in February last year – making the perennially popular “Good Ordinary” bottles rather less ordinary. His design, our second ever GOC collaboration, will be on the shelves in early 2017.

“I spent ages thinking about it,” Edward Hall says of his label artwork. “It was really exciting, especially as you usually go into wine shops and the labels are boring; but it was much harder than I expected it to be – you’ve only got one shot to make something memorable and fun.” He shakes a sheet of paper free from a slew of other commissions for books, hotels and fashion brands: a startlingly ginger, grape-crowned Bacchus looks out coolly from the page.

“I draw a lot of people; I like drawing faces, so I thought it would be fun to do a face. And I do a lot of ancient Greece and ancient Rome inspired-drawings, so a Bacchus seemed like a fitting idea. He has that mischievous vibe about him,” Edward Hall explains. “What I quite like about it is the colours are quite strong; it looks like it could be a 70s theatre poster. It’s hard to know quite whether it’s the right thing – should it be more graphic; should it be more colourful? But I just thought it was the most ‘me’ design.”

Such self-questioning aside, Luke’s designs are produced with a confident hand and a discerning eye – and for increasingly high-profile clients. A Central St Martin’s graduate, whose CV boasts architect-to-the-stars Ben Pentreath as his first “proper” employer, Edward Hall has been extremely fortunate in his commissions thus far. He recently created a range of hand-made plates and platters depicting Greek hero stories –“Achilles, Theseus and so on – I love all that imagery” – for the David Gill Gallery’s acclaimed annual exhibition Young Bright Things, a showcase for fresh talent.

Most prominently, he recently worked with Burberry for its autumn/winter 2016 campaign, contributing whimsical illustrations to be shown alongside Mario Testino’s photographs of the collection. His latest, and perhaps most unusual brief to date, was to curate a contemporary art auction for Christie’s First Open, selecting and styling books, plants, objets and art to create a “collector’s room set” – “fun but nerve-wracking” says Edward Hall.

To date, he has certainly garnered the right kind of attention; he hasn’t had to knock on doors to find his next project. “I’m just saying yes!” he says. “People, so far, have come to me and usually with things that have been a good fit.” So what would his dream gig be? “A hotel,” he says, without hesitation. “An English Country hotel; it would be fun to do something that’s a bit more ‘out there’.”

One can only imagine that such a hotel would be as eclectic as it would be exciting. Edward Hall’s eye for colour and design is undeniable; so too is his seemingly effortless talent for creating illustration, textiles and ceramics that reflect inspirations such as interior designer David Hicks and avant-garde French artist Jean Cocteau (as much in terms of style as his multidisciplinary approach to creativity). Let’s hope just such a commission comes in soon.

In the meantime, we will have to content ourselves with a smaller-scale slice of Edward Hall’s talents: a limited-edition run of 4,000 bottles of Good Ordinary Claret, featuring his Bacchanalian-inspired label, will be released in February 2017.

Luke Edward Hall’s limited-edition Good Ordinary Claret will be available to buy from 16th February on bbr.com and in both our shops. A version of this article was originally published in No.3.