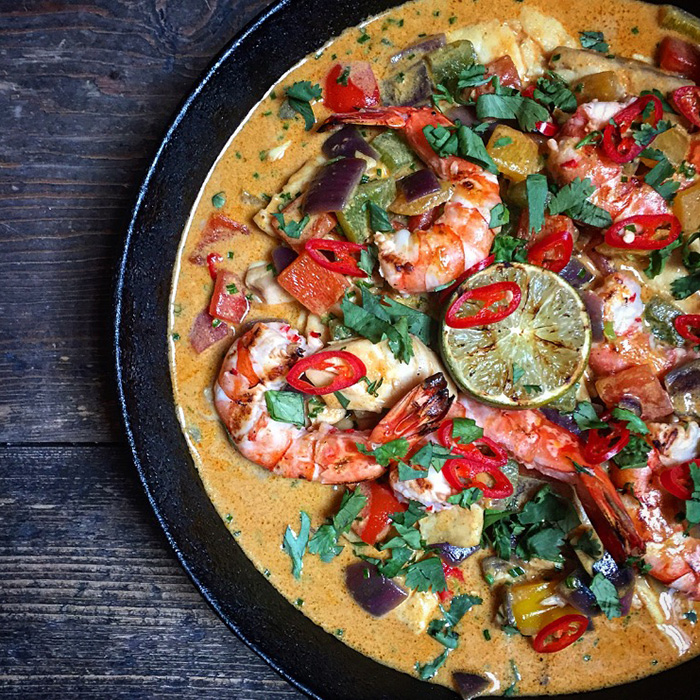 As the nation’s athletes go for gold in Rio de Janeiro, our Head Chef Stewart Turner recreates a classic Brazilian fish stew that tastes as vivid as it looks. As ever, Demetri Walters MW is on hand to suggest suitable vinous partners.

On the table: With the Rio Olympics underway, I thought I would try my hand at a little Brazilian cuisine. Moqueca is, without a doubt, one of the most iconic Brazilian dishes. While it’s made in several different states, the most well-known version comes from the state of Bahia, where it has been made for hundreds of years. This traditional fish stew is typically prepared in beautiful, rustic clay pots and features the characteristic ingredients of north-eastern Brazil, palm oil and coconut milk. The type of fish and seafood used varies according to personal preference and region. I’ve made our version with sea bream and tiger prawns. The palm oil is really essential to get the amazing flavour and colour of the dish, but can be quiet tricky to find. I tracked some down online, but you can use olive oil as an alternative.

In the glass: While not currently on our list, Brazilian wine does exist. Mainly red, there is some convincingly drinkable Tannat and Merlot at the top end of the quality ladder. Interestingly, sparkling wine constitutes a significant minority of output, and many of these fruity, off-dry, spumante wines might work well with Stewart’s recipe. The cooler, though more humid, south of the country is home to the majority of viticulture, with the warmer and drier north, often with two harvests a year, being more prolific. Fewer than 10 percent of grapes are fashioned from vitis vinifera and destined for high quality wine. Quality is on the increase, however, and it will be fascinating to observe the future prospects of South America’s third-largest wine producer.

This exotic-sounding recipe possesses a great many bold flavours, fragrances and textures, so we have to be careful in our wine choices. Oily, full-bodied white wines would complement the colourful flavours and spicy heat. Add something with corresponding fragrance and you have the perfect foil for coconut milk and coriander. The northern Rhône combination of Marsanne/Roussanne provides sufficient richness, whilst the stone fruit of Viognier would furnish the aromatic imperative that some might prefer with this dish. Consider a riper New Zealand Sauvignon Blanc; something sporting that bold interplay of expansive mouth-feel and pungent elderflower fragrance. Fruit intensity and freshness work well with food flavours such as these, and most Rieslings, with or without residual sugar, would provide a convincing partner and awaken the lime flavours in the food. This meal also provides the perfect excuse for employing the rose petal aromas of Gewürztraminer, or the zesty zip of many Muscats. Whichever wine route you opt for, be daring in your choices. This cuisine can take it.

Place fish and prawns in a large dish. Toss with the juice of one lime and a good pinch of sea salt. Chill for 30 minutes to marinate.

Heat the palm oil in a large saucepan over a medium heat. Sweat the diced red onion for three minutes, until softened. Add the peppers, garlic, chilli and spices then cook, stirring occasionally, for a further five minutes or until the peppers have softened.

Stir in the stock and bring to the boil. Simmer for approximately 10 minutes until reduced by about half, then add the coconut milk. Return to the boil, then reduce the heat to medium and cook for a further 10 minutes.

Add the prawns, fish and marinating juices. Cook for a further eight to 10 minutes until the seafood is just cooked. Stir in the diced tomatoes, coconut oil and remaining lime juice. Season to taste. Finish with chopped coriander and serve with steamed rice.