They came to Number Three: the visitor from Rum Row 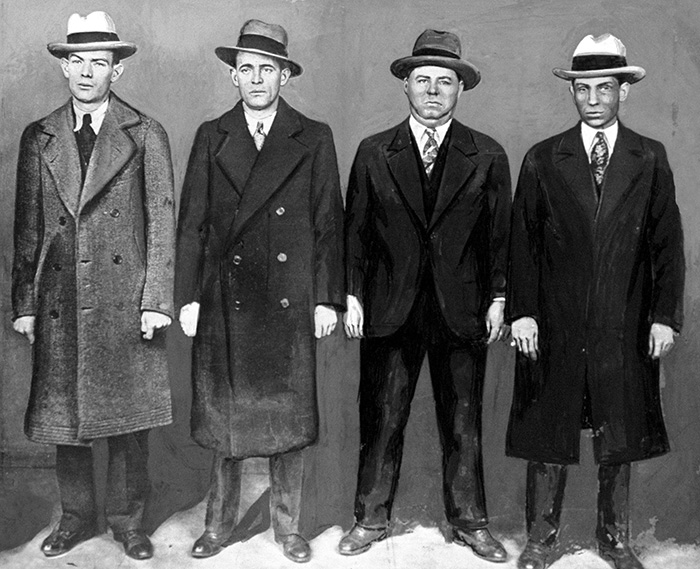 No.3 St James’s Street might not be an address one associates with bootlegging gangsters – until now. In an article originally published in our Number Three magazine in the spring of 1971, we remember an infamous visitor of the 1920s and our relationship with a certain William McCoy.

The violence brought to life by the Hollywood gangster film and the civilities of St. James’s Street could hardly be farther apart, but one day in the 1920s (so the story goes and there is no real reason to doubt it) the two worlds met at Number Three. Into our shop, it is said, came a transatlantic visitor of intimidating mien, probably wearing, one imagines, a low brimmed soft hat, tightly fitting double-breasted overcoat and shiny pointed shoes. At his sides slouched two tough-looking characters that not even the staff of Number Three were too unworldly to recognise as “hoods”.

Francis Berry, who knew a good deal about the Prohibition scene that was making such an ass of the law in America, may well have sized up the visitor from one of his trips to the Bahamas at the time when Nassau was beginning to flourish as a bootleggers’ paradise and Bay Street was thronged with new arrivals from the Bowery and the Bronx. At any rate the legend has it that as the three sinister figures advanced across our sloping floor Francis was quick to find other business upstairs.

The instinct not to be involved was sound, for the visitor was one of the more vicious of the gangsters thrown up by Prohibition in the States, Jack “Legs” Diamond. He had made his money by running bootleg liquor from “Rum Row” – the name given to the coastal waters between New York and Atlantic City where much of the smuggled liquor was brought in – to the nightclubs and speakeasies of Manhattan, equipping his gang with sawn-off shotguns to discourage competitors and fend off hi-jackers. In 1926 the New York garment manufacturers employed “Legs” Diamond and his triggermen to battle with another gang hired by the workers’ union. But one of the more spectacular episodes in Diamond’s career was when he was alleged to have walked into the Hotsy Totsy Club in New York and shot down the two owners in the midst of scores of dancing couples.

Fortunately, one can assume that whoever took his order at Number Three did nothing to irritate Diamond or his bodyguards. It is said to have been a very substantial order – mostly for Scotch whisky, presumably, since it was this that fetched the highest price of any bootleg liquor in “dry” America. The consignment was paid for in cash and collected from our cellars by a fleet of taxis the following day after hurried preparations. But perhaps it was as well that we could turn a blind eye on its final destination.

Number Three may have owed this business to Francis Berry’s pre-Prohibition trips to the States, which laid the foundation – after the Eighteenth Amendment had come and gone – for our successful export trade with that market. Meanwhile, in the 1920s, there was a tremendous demand among an American drinking public that had seen men blinded and paralysed by speakeasy “hooch” for genuine imported liquor – something “right off the boat”. And, as the late H. Warner Allen recorded in our firm’s history, “though Number Three was careful to keep its fingers clean from dabbling in illegality and bootlegging… the legal demand for its wares in the Bahamas was vast, and the label of Berry Brothers & Co. was becoming more and more an accepted guarantee of quality and honesty in a country hagridden with adulterated imitations and poisonous substitutes”. Quite probably, then, Jack Diamond was familiar with our label and wanted his supplies from their untampered source.

The Bahamas, where Diamond may well have been bound on his way back to Rum Row and New York, had become a base for the American bootlegging industry because it was a British colony unaffected by the Volstead Act, but near to the Florida coast. Liquor was shipped as legitimate cargo from London, Glasgow and other European ports to Nassau, where it was taken ashore and stored after payment of $5 per case revenue tax to the insular government. It was then shipped in any available vessel to Rum Row, where the bootleggers smuggled it ashore in motor boats. From a sleepy backwater Nassau became one of the wealthiest smuggling centres in the world overnight. In 1921 £645,190 worth of whiskey alone was imported and by the following year this had jumped to £932,865. The Citizens of Nassau looked forward to unhoped-for new amenities. But the boom was short-lived and by the mid-1920s the bootleggers and gangsters had moved to other places where liquor was not taxed. 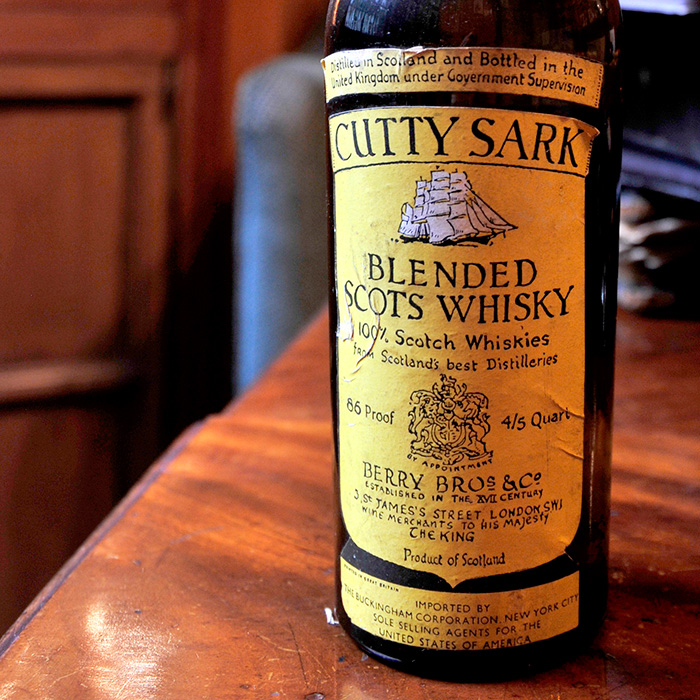 One of the earliest and most likeable of the rum-runners operating from Nassau (all liquor smuggled to the States was known as “rum”) was Capt. William McCoy, whose reputation for supplying good liquor at fair prices has left us with the expression “the real McCoy”. On one of his expeditions aboard his fine white schooner he took with him as a passenger another of the romantic figures of the Nassau rum-running trade, Miss Grace Lythgoe, whose dark-haired beauty and debonair elegance had earned her the name of “Cleopatra, Queen of the Bootleggers”. An American from California, Miss Lythgoe ran a legitimate wholesale liquor business licensed by the Bahamian government but she enjoyed the dangerous game of smuggling.

McCoy and Miss Lythgoe saw the scene in Nassau change as the gangsters’ syndicates increasingly took over the business. With the bootleggers came the parasites who preyed on them – the hi-jackers who robbed the rum-runners and the contact boats of their cargo or their earnings, or held up bootleggers’ trucks on the run from Rum Row to New York City. For McCoy rum-running began as a very profitable bit of high seas adventure; he ended by mounting a Lewis gun his schooner and arming his crew with pistols and rifles. The huge profits to be made out of smuggling liquor into the States (federal sources put the value at $40 million in 1924) had turned a romp into “Legs” Diamond’s world of hard-eyed, sub-machine-gun-carrying hoodlums.

Like other firms in the British wine and spirit trade, we were hard put to it to protect our reputation in “dry” America because it was impossible to control what happened to consignments legally shipped to non-Prohibition areas and then smuggled into the States. The desperate drought there caused prices to rocket, and the practice of faking or “cutting” (that is, adulterating and stretching) imported liquor became a fine art of huge dimensions. Declared an anonymous (and reformed) bootlegger whose disclosures in The Morning Post in 1923 have been preserved in the firm’s scrap book:

The average American cannot tell genuine from faked spirits by the taste and continues to drink synthetic poison, buoyed up by the assurance of his bootlegger that this particular case came straight from Scotland… But for every one bottle of Scotch whisky that leaves Scotland several dozen bottles of ‘Scotch’ are consumed in the United States.

The results of drinking the “synthetic poison” so often led to blindness, paralysis or death that people came to regard such tragedies as no more unusual than a motor accident. The art of imitation was brought to such a pitch that one New York syndicate succeeded in selling off a quantity of cider as Champagne, importing women workers from the Champagne district of France to put the foil over the necks of the bottles in authentic style.

On November 11, 1922, the following news item appeared in The New York Times:

LONDON, NOV. 10 – British wine merchants of repute are indignant at the way American bootleggers are copying their trade marks and labels and affixing them to bottles of wood alcohol and other poisons.

Berry Brothers & Co. of St. James’ Street, London, have a special cause of complaint. They have just heard from one of their old customers in New York that a man has called on him and represented himself as their agent. They have not, the firm declares, consigned any wines or spirits to the United States since 1917, and they assert that any one who is trying to sell liquor in their name is acting fraudulently.

The thought of fire-water being sold in the name of Berry Bros. so horrified the partners that they had bold “WARNING” advertisements placed in the American press, telling the public that they would probably incur considerable risk by dealing in these spurious goods. No wonder Francis Berry was an enthusiastic member of the Ligue Internationale des Adversaires de la Prohibition, formed to fight so-called “temperance” propaganda and prevent the spread of Prohibition to other countries. Contrary to a note that the prohibitionist campaigner, “Pussyfood” Johnson, once wrote to Francis aboard ship, advising him to train his son for the cloth rather than the “vanishing industry” of the wine trade, Prohibition brought huge profits to the “liquor dealers”. Only the reputable merchants, true to the tradition of real temperance, deplored the terrible abuses that came from trying to enforce the unenforceable. The irony of later prohibitionist propaganda in the States was that it was promoted and paid for largely by the people it most condemned. With the rising tide of public opinion favouring the repeal of the Eighteenth Amendment, Prohibition’s chief beneficiaries – smugglers, bootleggers, hijackers, gunmen, manufacturers of the chemicals, faked bottles and spurious labels – became more dry-principled even than the original promoters of the Volstead Act.

In 1933 commonsense brought an end to the “dry” era (though not to the organised crime syndicates it had brought into existence) and the Eighteenth Amendment was repealed. By then Francis Berry had retired and “Legs” Diamond had been shot. The reputation that the bootleggers had somehow helped to keep alive for us among America’s more discriminating drinkers could now be drawn upon to market legitimately a brand of Scotch whisky called “Cutty Sark”.

One Response to “They came to Number Three: the visitor from Rum Row”