From the inside: true temperance 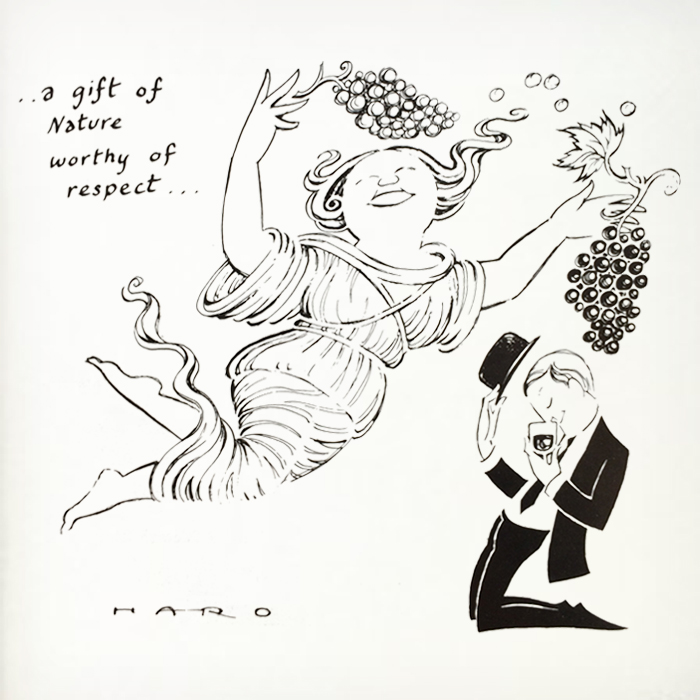 Tackling the inescapable issue of health, an article from a 1989 edition of our Number Three magazine ponders how far the wine merchant’s duty of care extends, establishing an attitude of “true temperance”.

Like most of life’s pleasures, from sunbathing to ski-ing, drinking alcohol can have its hazards if it is not done sensibly – and recently there seems to have been almost a conspiracy in sections of the media to frighten us out of enjoying a drink by sensationalising the hazards. Few of us, of course, would argue with publicity aimed at persuading people not to drink to excess and to be sensible about drinking and driving; indeed the wine and spirit trade has been taking a very active part in these campaigns. But, as has already happened in America, there are signs that alcohol is being seized on by what have been called the “health fascists”, who, in pursuit of some ideally safe and sanitised existence, appear to want to attach health warnings to almost everything that we use and consume. With obvious offenders like the lover of fatty foods and the smoker duly chastened, the consumer of wines and spirits is clearly in danger of being lined up as the next target. An example of this was an issue of the Sunday Times magazine earlier this year which set out to dramatise the perils of alcohol and managed to imply that even the moderate regular drinker was “at risk”. A visiting Californian wine grower who saw this feature felt it amounted to a “betrayal” of our civilised tradition and said he had expected better of the most sophisticated wine-drinking country in the world.

Why is there this urge in some quarters to represent even a modest intake of alcohol as harmful – a claim that, as we point out below, cannot be justified by medical evidence? It is presumably linked to public concern about problems such as the “lager lout” phenomenon, drink-related road accidents and drinking by the young. But these are problems arising from the irresponsible use of alcohol, to which it seems a perverse answer to blame the product rather than the abuser. Anything taken to excess can be harmful (including most of modern medicine’s drugs), so the question is where individual responsibility for social behaviour begins. Bernard Levin raised this issue in an article in The Times commenting on an extraordinary court case in America; it concerned a woman alcoholic who, after drinking up to half a bottle of Bourbon a day during her pregnancy and then giving birth to a defective baby, was suing the whiskey producer for not putting a label on the bottle warning of the risk to her unborn child. As Levin wrote: “She wants someone else to bear the blame. More, she wants someone else to pay for the blame”. This seems to be the philosophy of some of the more vociferous campaigners against alcohol abuse. Because over-indulgence can lead to unruly behaviour, or in the long term to damage health, they want to see the responsibility shifted from the reckless user to the drink itself and have it labelled as potentially harmful or even banned.

The anti-alcohol lobby has, to our mind, pushed us all – including the wine and spirit trade itself – into and unnecessarily defensive attitude over one of civilisation’s oldest pleasures. The official ruling at present is that the average person can safely drink up to 21 “units” a week if male, or (a very unfair bit of sex discrimination on nature’s part) 14 “units” if female. But this is a very negative way of looking at it. What about the beneficial effects of alcohol? Has mankind been wrong through all the generations since St. Paul wrote “Use a little wine for they stomach’s sake and thine own infirmities” in believing that the fermented juice of the grape was not only an ideal digestive with food, but could also help to ease pain, reduce tension and alleviate or even cure various daily ailments?

Disagreement among the medical profession about the benefits or otherwise of alcohol is nothing new, as we found when reading a little book called ‘Chats About Wine’ published in 1907. Noting that “a certain percentage of medical men are always to be found ready to advance arguments against the utility of alcohol in any form”, the author cites a statement recently published in The Lancet by a large number of eminent specialists and doctors disputing this view and “sanctioning the moderate consumption of wine as a beverage for daily use… and restoring it to its rightful place in the list of remedial agents”. In our own times we have had the finding by a Medical Research Council unit in 1979 that wine appeared to have a protective effect against some forms of heart disease (a finding that inspired the marketing in France of a wine called Le Vin Coeur), and the more recent report from America that wine drinking actually produces a “good” cholesterol which sweeps through the arteries eliminating “bad” cholesterol.

However, although we number a high proportion of medical people among our customers, we cannot claim to speak with any authority on such matters. We leave the summing-up to the well-known wine writer Jancis Robinson, who in her book ‘The Demon Drink’ goes into all the pros and cons of alcohol with admirable objectivity. She writes: “Try as well-funded American researchers might to prove that even a moderate consumption of alcohol is a thoroughly bad thing, they have not established any causal relationship between moderate drinking and medical harm. In fact, there is considerable evidence that drinking in moderation is positively beneficial”. She adds, “There are several possible explanations for the ability of a controlled dose of alcohol to ward off heart disease, all of them quite technical and some of them quite likely. The most appealing to me is its ability to alleviate stress. Should the medical profession eventually abandon its enquiries into more complicated hypotheses, and decide that alcohol’s miracle ingredient is that it can make us relax, this will surely be a vindication of common sense”.

One response to the anti-drink campaign has been to promote low-alcohol or no-alcohol beers and wines – in fact, it has even been suggested that if alcohol could be taken out of, say, a First Growth Claret we should have the world’s perfect drink! From our own experience, however, de-alcoholised wine, despite the amusing TV commercial in which it wins Oliver Reed’s approval, is only “wine” in quotation marks. While there are many other properties in wine besides alcohol, it is the alcohol that somehow binds them together and makes wine what it is. A much more acceptable form of low-alcohol wine, we would have thought, is to be found among the Hocks and Moselles, especially the “new breed” of Trocken and Halbtrocken wines, which can combine flavour and body with an alcoholic content of frequently well under 10%.

We in this country are particularly well-placed to find an intelligent solution to the so-called alcohol problem, because – as the Californian grower shocked by the Sunday Times magazine feature reminded us – we have a long history of civilised enjoyment of wine. It is surely much better to educate people to drink sensible than to try to suppress excess drinking by legislation (how much of today’s organised crime and international dealing had its origins in America’s ill-fated Prohibition experiment?), and there is no more effective way of doing this than to foster an interest in wine and its subtler satisfactions. This process of education is now one of the main aims of the wine trade, much helped – as we observed in our last issue – by a very knowledgeable body of British wine writers who command large audiences. The more people can be encouraged to treat alcohol as a gift of nature worthy of respect, rather than as “booze”, the less need there will be to scare, bully and ban. As wine merchants, therefore, we think we can reasonably claim to be promoters of true temperance.