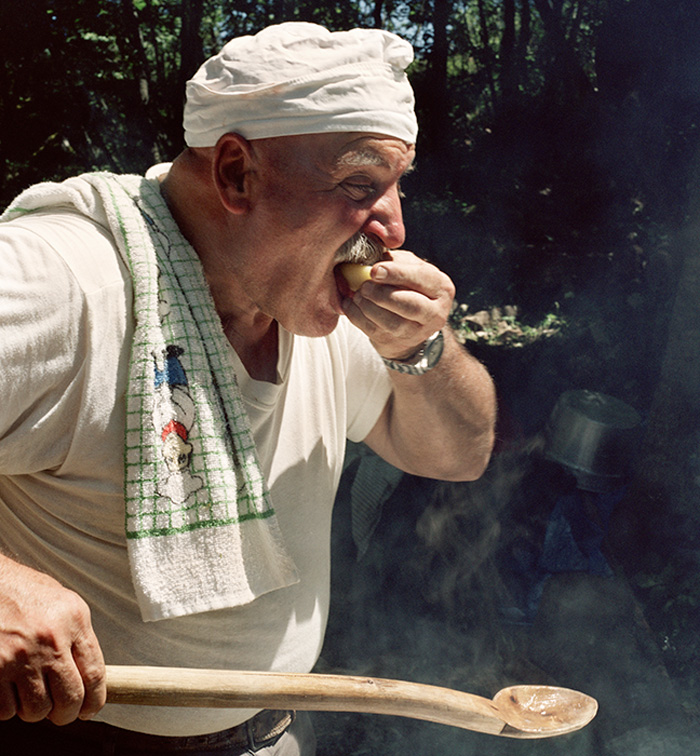 In the second of our essential ingredients series, our Head Chef Stewart Turner provides a show-stopping recipe for baked brill with clam vinaigrette, and Demetri Walters MW – Sales Manager of our Private Wine Events team – discusses which wines best partner the summer’s seafood.

On the plate: For this recipe I’m not really focusing on one ingredient, but on a lighter approach which suits summer climes. As the weather warms I tend to focus more on fish. As an island nation, we are blessed with shores of fantastic fish and shellfish – some of the best in the world, as a visiting French three-Michelien-starred chef once told me, praise indeed.

I only really like day boat fish that has been line caught, and is far more sustainable than trawled fish. For this recipe I’m using brill which is a wonderful flat white fish (only second in my opinion to the majestic turbot, which is the king of the seas), but you could use any fish you like. Cooking fish whole is relatively simple and, as with anything cooked on the bone, has a wonderful flavour, as well as having a real wow factor.

In the glass: For years Britain sent most of its seafood abroad; but today people are waking up to the superb quality and diversity of sea fish and shellfish harvested in our home waters.

Starting at the humbler end of the spectrum, I’ve long been a fan of eating fish and chips with Champagne; but Camel Valley provides a patriotic alternative. At the other end of the scale is the noble sole, for which Chablis provides a match made in heaven. A richer white Burgundy could well be the right choice for a delicious fish pie. With fully flavoured fish such as red mullet, you need look no further than the textural complexity and herbal intensity of Bart Lyrarakis’s Mistirio Dafni from Crete.

Many wines work well with shellfish. So, whether you’re enjoying lobster, crab, oysters, clams, scallops or mussels, experiment with all manner of leaner Old or New World white wines, preferably something with a marked mineral seam, and an overall restraint, like the perennially good-value Muscadet-sur-Lie by Domaine la Haute Févrie.

In the case of Stewart’s recipe, the unusual Riesling/Albariño blend, Ekam, by Castell d’Encus, will provide the combination of freshness, weight and delicacy that this dish requires.

Preheat the oven to about 220˚C. Scatter a large oven tray with the lemon slices, thyme and rosemary. Season well with salt and pepper, drizzle with olive oil and place the brill on top. Season well again and splash on another good glug of olive oil.

Roast in the oven for 20 minutes, then remove to have a look. If the fish is almost cooked (pull a little from the bone to see), finish under a hot grill for about five minutes to cook right through and brown a little bit.

Rest the brill for a few minutes, and warm the vinaigrette (recipe below). Serve with some new potatoes and a green salad.

Roughly chop the onion, celery and leek into quite large chunks. Heat a large lidded saucepan and add a good splash of olive oil. Once hot, add the vegetables, garlic and parsley stalks. Sweat for a couple of minutes (but don’t let them colour). Add the clams and white wine. Cook covered for three to four minutes, or until the clams have opened. Drain the clams and set aside. Discard the shells and vegetables; place the picked clams in a bowl. Simmer the cooking liquid until the volume of liquid has reduced by two thirds, and set aside.

Heat a tablespoon of olive oil in a small pan and soften the onion and the garlic, without allowing them to colour. Tip into a bowl, repeat with the diced courgettes and add to the cooked onion. Stir in the tomatoes, broad beans and clams. Whisk together the clam liquor and olive oil to form vinaigrette. Season with lemon juice, salt and pepper; although be careful not to add too much salt as the clam liquor can be quite salty. Stir in the herbs and pour over the clam mixture. Mix well and set aside.