On the table: Vinoteca King’s Cross 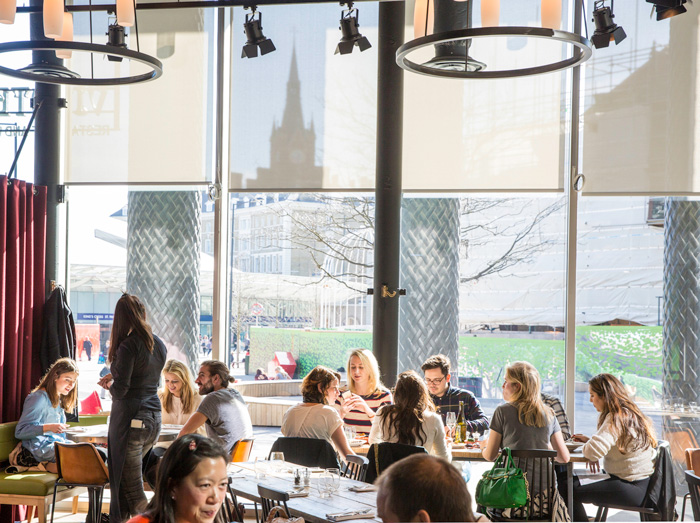 This month Victoria Stewart visits the flourishing King’s Cross area to check out the newest branch of Vinoteca, a stalwart on the London food and wine circuit.

Restaurants are springing up around the new King’s Cross station development faster than Gordon Ramsay can roar the F-word. Yet these are not the sorts of unassuming bolt-holes you find in Soho; in four years we have seen socking great canteens like Caravan, Bruno Loubet’s Grain Store and recently Dishoom go up inside the old grain store warehouse on Granary Square, itself transformed. Their menus and design may be wildly dissimilar but what they share is prominence, high ceilings and plenty of leg-room.

The new Vinoteca, the fifth and largest outpost from the Italian wine bar and restaurant group, fits into this galumphing crew. Bear right out of the station and you are directly confronted with an office block bearing down on enormous brown pillars, and Vinoteca emblazoned in curling yellow letters. Blink and you won’t miss it.

On a balmy Friday evening there’s a steady crowd assembling either on wicker beach chairs outside, or inside where the atmosphere is warm and effervescent, designed with corrugated green glass partitions, pendant frosted-glass chandeliers and an impressive, semi-circular bar. Beaming neon letters indicate the Wine Shop. Outside on the new Pancras Square, my pal and I are surrounded by groups of skittish skateboarders, an old gymnasium, the soon-to-launch Granger & Co. restaurant and the new station, its domed roof like a mini Eden Project.

Recreational wine lovers, or those in a rush, might stick to the one-page daily bar and food menu, since the full wine list, separated usefully by flavour profiles, is a laminated manual of nearly 30 pages. Thankfully we are not expected to share an array of frantic small plates so instead settle comfortably into the customary sequence of snacks, mains, desserts, separated by price tags: £2-4.50, £6-£9, £12-20.

‘Crispy lamb, anchovy and mint mayo’ are three balls of deep-fried unctuousness. ‘Grilled Bideford squid, aubergine and harissa salad’ is rather oil-heavy but its main feature is so tender that it must be the result of long cooking and charring. Though served with melba toast that immediately breaks, the potted Portland crab is a super dish, sweet and briny, with a brief zip of frisée and crunchy radish slice.

A plate of ‘oriecchiette’ is as nice and balanced a version as I’ve had anywhere, and the little earlobe pasta shapes make ideal bowls from which to scoop up buttery, garlic and parmesan sauce. Roast Scottish salmon is accompanied by Jersey Royals and freshened up with gangly Monk’s Beard and a lovely lemony Hollandaise sauce – but too steep at £18. Gently spiced black-pepper ice cream is an encouraging finish.

Vinoteca King’s Cross will not take you on a thrilling tour of new flavours and sophistication, but in a city of endless dining experiences it’s the sort of steady, satisfying place that is useful to have up your sleeve if you’re in the area.