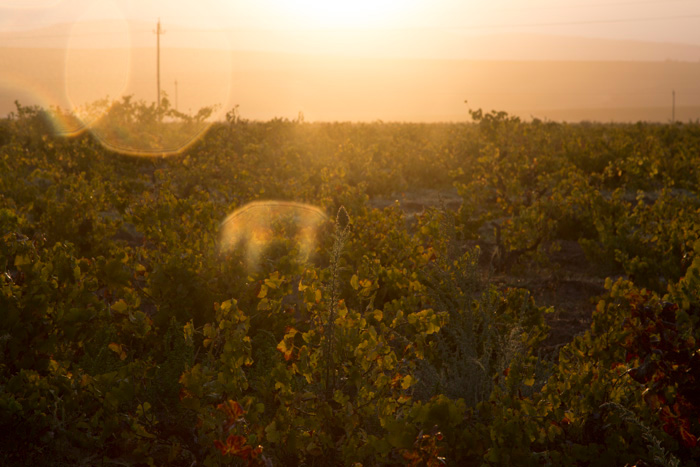 In the first of our ‘re-postings’ of articles from our Number Three magazine, we republish a feature from 1992 on the history of the South African wine trade and its prospects in the wake of apartheid.

The result of the March 1992 Referendum will probably be seen as an historical turning-point for South Africa, as critical for its development as a nation as the Act of Union of 1910 which followed the Boer War and brought together the separate states which included the Transvaal, the Orange Free State and the Cape Province. For the last thirty years of apartheid rule, South Africa has largely been in a state of suspension as far as the export of wine is concerned; although at home their wine-makers have somewhat defiantly remained in touch with advances in oenological and viticultural practice world-wide. Whereas Australia, New Zealand, California, Chile and Bulgaria have all developed markets in the last twenty years for their wines in the United Kingdom and throughout the world, South Africa has had essentially to live without the stimulus of trade to help keep them ahead of what has happened elsewhere. The traditions and skills are nevertheless very much alive in the Cape wine lands not to overlook that they are blessed with an ideal climate for wine-making; all that has been lacking in recent years is the opportunity to compete for consumers on the world stage.

When Jan van Riebeeck who was employed by the Dutch East India Company as the first commander of the colony at the Cape of Good Hope recorded in his diary on 2nd February 1659, ‘today, Praise be the Lord, wine was made for the first time from Cape grapes’, some seven years after the re-victualing station had been founded, the story of South African wine had begun. To compare starting dates with other ‘New World’ areas: Chile began growing vines around 1548, Argentina in 1557, California some time between 1600 and 16010, and Australia and New Zealand began planting vines around 1813. From the mid-17th Century onwards the painstaking process of trial and error started in the Cape and it is not hard to imagine the pioneering difficulties that the early Dutch settlers had to overcome – some of the least of which were flocks of birds descending on their grapes as they reached maturity each vintage as well as marauding bands of Hottentots thieving the precious bunches. Mercifully for a long time little in the way of disease was recorded.

The birth of the reputation of the Cape for producing quality wines can be traced back to Simon van der Stel who established a farm at Groot Constantia beside Table Mountain soon after becoming Governor of the Cape in 1678, and who gave his name to Stellenbosch the town that was to become the heart of the Cape wine lands. He put viticulture on a firm footing, setting an example to the early colonists by making wine for a quality not yet seen in the Cape, and by the early 18th Century ‘Constantia’ had achieved the very highest of reputations throughout European Society. A further qualitative leap was made in 1688 when some two hundred Huguenots arrived injecting a more cultured element into the life of the colony, not necessarily bringing direct wine-making experience with them from France, but certainly a demand for good wine to which they had become accustomed. They succeeded in extending the vineyards in Franschoeck, Paarl, and Stellenbosch and in improving the quality of the wine made. 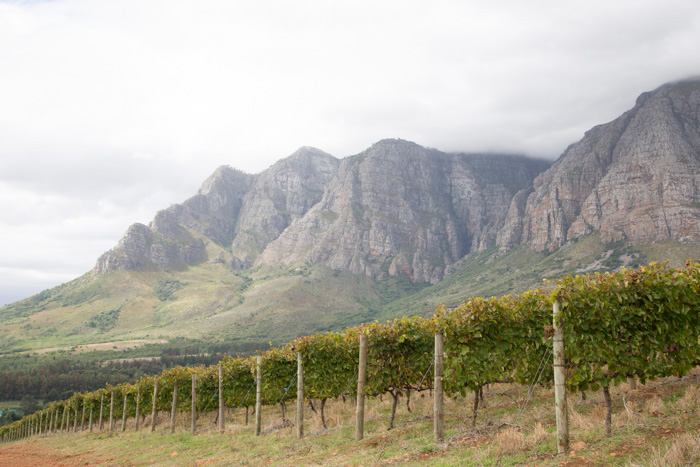 Progress over the last 300 years had been achieved despite a host of near calamities, both political and viticultural. The Napoleonic Wars opened up the British Isles to South African wine. In 1805 England took possession of the Cape as a measure to combat the French navy, and exports flourished until 1861 when Gladstone the then Chancellor abolished preferential ‘Empire’ tariffs. French wines once more became cheaper and were of course more practical to transport.

Cape wine production then went into decline through lack of a sufficient market for its wines. Viticultural calamity then followed commercial disaster when the ravages of the phylloxera vastatrix aphid made themselves felt from 1885 onwards, despite the government ban on vine-plant imports. However, by that time in France the solution had been found, grafting on to phylloxera resistant American rootstocks was quickly adopted and recovery was comparatively swift. The south-western area of the Cape of Good Hope is blessed with a near perfect ‘Mediterranean’ climate for growing grapes, the wine lands are situated between 33˚ and 34˚ south mirroring the position of southern Spain in the northern hemisphere. Compared with other regions average temperatures are high, the weather commendably steady and bad vintages few and far between. Local concern at the lack of demand at the turn of the century was nevertheless typified by the Cape wine growers’ adage: ‘good crop, bad cash: bad crop, good cash’.

1905 saw the beginnings of what has become since a highly developed co-operative movement among the growers when a government commission recommended they joined together to form co-operative wineries. The idea was to provide a two-fold benefit, collective bargaining would support grape prices and shared investment in capital equipment would improve quality of the finished wine. Oddly enough, and immediately a more effective restriction on production, was the demand for Ostrich feathers in Europe which occurred from 1906 to 1913. 10 million vines were uprooted in the Karoo-Breede River area to make way for the provision of plumes to adorn the costumes of the fashionable flappers to be seen in the ballrooms of the Savoy and the George V. Equally sudden was the demise of feather exports when the advent of the motor-car required a rapid ‘change of gear’.

With over-production once more proving a problem, by 1918 the KWV had been formed (the Ko-Operatieve Wijnbouwers Vereniging van Zuid Afrika) which was to attract some 95% of all growers to join. Its raison d’être was ‘to direct, control and regulate the sale and disposal by its members of their produce, being that of the grape, as shall secure or tend to secure for them a continuously adequate return for such produce’. The Act of 1940 enabled a minimum price to be set for ‘good wine’ in addition to the minimum price for distilling which had been enacted in 1924. By 1940 transactions between growers and merchants had to carry the KWVs approval; perhaps more importantly the KWV or its equivalent made over in cash. These were powerful incentives indeed to reduce unsaleable production.

While in the 1930s Cape Sherry remained one of the main products of South Africa, work was proceeding apace to develop ‘natural’ wines. Working at the Stellenbosch University farm professor Perold produced the first seedlings of Pinotage in 1925, a cross between Pinot Noir and Cinsault, although it was not until the 1950s that its commercial development began in earnest. In 1935 the Stellenbosch Farmers’ Winery inspired by an American medical man, William C. Winshaw, was officially recognised and concentrated its efforts on the development of natural rather than fortified wines. 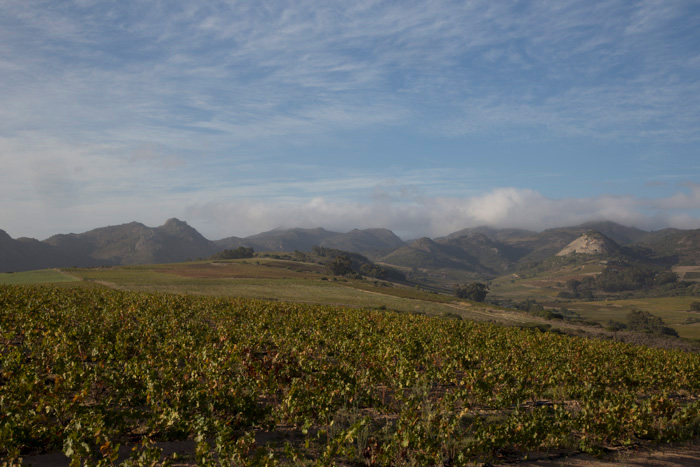 From the end of World War II the Cape saw a revival in its fortunes while France was struggling to recover after the devastation of the war years. With the increasing demand for dry wines the Cape wine-makers were among the earliest to introduce modern cool fermentation facilities into their wineries and were certainly ahead of Australia and California by the early 1950s. Temperature control equipment reduced their reliance on fortified wines and knowledge of the microclimatic differences within the coastal region and the Little Karoo situated beyond the Drakenstein mountain range were becoming increasingly codified. Full-bodied dry red wines made from Cinsault, Shiraz, Pinotage and Gamay were found best in Paarl, Durbanville and parts of Stellenbosch whereas lighter-bodied reds made from Cabernet Sauvignon, Cinsault and Shiraz were found to be produced best in Constantia, Stellenbosch and Somerset West. White wine made principally from Chenin Blanc (or the Steen as it is known in the Cape) Colombard, various types of Riesling, Traminer and Clairette Blanche are found in the vineyards around Paarl, Tulbagh and the communities along the Breede River. To this day only a limited amount of Chardonnay is planted although it is increasing as vines are re-grafted to make way for this vinous international best seller. In 1956 an Act of Parliament limited the grower to the number of vines he could grow, but no quota was placed on the proportion of the cultivars (the Cape terms for grape varieties) his vineyard must be made up of. In 1973 Wine of Origin regulations were enacted to reflect the appellation contrôlée  system introduced within the European community and a seal indicating the classification for the wine can now be found attached to the capsule on all Cape wines.

Thus South Africa has a very strong tradition of production control intended to prevent over-production and to secure a living for the farmers. The system has also provided sufficient encouragement to the industry ensuring it continues to make and improve the wines. Advanced wine-making equipment could also be afforded by pooling resources at the co-op winery level and this has certainly ensured that there is a very high level of expertise in producing inexpensive dry wines, particularly white. High quality estate wines have also been made predominantly in the areas closest to the coast but have largely been made to satisfy the internal market for quality wine. International recognition for the quality of their estate wines was given a boost last year when Beyers Truter, responsible for the Kanonkop Pinotage on our list received the Robert Mondavi trophy for wine-maker of the year in 1991. In our tastings over the last twelve months it has been fascinating to see the promise and potential of their wines but to realise also how the lack of overseas trading has meant a lack of experience among the majority of producers of the style of wines their customer would buy given the range of wines that have gained popularity in this country from the Americas and Australasia.

Now that the political situation in the country is moving away from the stultifying effects of apartheid, reflected not least by the willingness of the governing bodies of the Olympics, international cricket and rugby to see them competing again at the highest level, lessons are quickly being learnt too in the sphere of wine-making. Recent reports from the Cape indicated that changes to the quota system for planting vines are being made, in response to the tremendous debate going on in the Cape regarding where best to site new vineyards and which cultivars should be grown. There is already much to enjoy and there is surely a lot more to look forward to.

Find out more about South Africa on bbr.com and keep an eye out for our South African offer later this month.