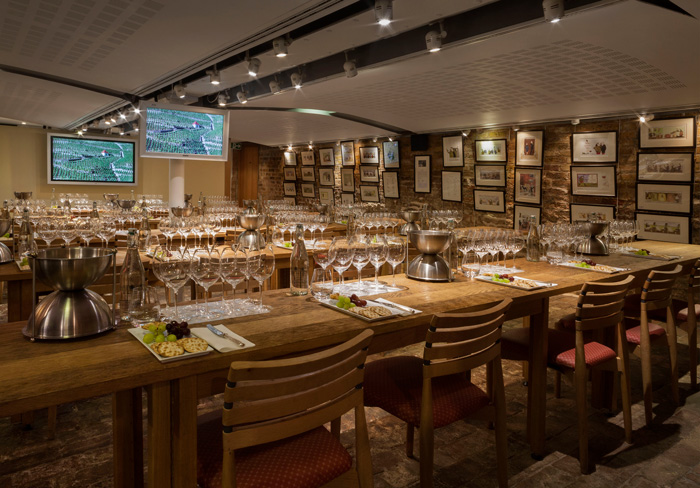 Barbara Drew, our Wine School Tutor, descends beneath No.3 St James’s to reveal the remarkable history of our Pickering Cellar.

One floor below street-level, beneath our London shop and Pickering Place, lies the Pickering Cellar. Named after William Pickering, the erstwhile barrel cellar formally dates from the 17th century. However, it is likely to incorporate earlier buildings from the area: some of the bricks from the hallway marking its entrance are alleged to be from the 16th century, while others still are said to date from the construction of Henry VIII’s tennis courts.  Parts of the building stretch even further back; taking a break from renovating the cellars, a builder was enjoying a sandwich (the contents of which, alas, remain unknown) when he heard a soft ‘drip’ nearby. Deciding to investigate, he discovered a well predating Henry VIII. We have since made a feature of this, erecting a glass roof over it so that visitors can see down to the foot of the well. (It can be quite a shock for the uninitiated.)

As you enter the cellar itself there is an alcove which has now been turned into a coat cupboard. Louis Napoleon, nephew to Napoleon Bonaparte, once hid behind some sail cloth in this very spot while exiled from France during the Chartist riots of 1846 to 1848. At that time he lived on King Street, having recently returned from five years’ imprisonment following his second failed coup to become President of France.  He and George Berry were friends and, together with the chef of The Athenaeum, he joined the militia to suppress the riots. When Louis Napoleon finally departed in 1848 he left his wooden truncheon behind, which still hangs in the hallway outside the Pickering Cellar to this day.

It was under Napoleon’s subsequent elevation to Emperor that the classification of Bordeaux became formalised. We jokingly like to say that he learned to love Claret as a result of his extended sojourns in the Pickering Cellar.

More recently, the space was employed as our bottling cellar. Barrels came down through the hatch on an old hoist that is still used from time to time to transfer wine down from street level. The original flooring is still in situ, and you can see the smooth, wide stonework at the sides of the cellar where one could walk, whilst towards the centre, the floor is marked out by old brickwork which provided the footing for the barrels. We even held the odd tasting there, using old wine boxes as seats, surrounded by the barrels.

These days, the cellar is a little more suited to convivial wine tastings. Approximately 15 years ago it was converted into the room it is today, with screens for presentations and the luxury of heating (though we need it less often than one might imagine). Two years ago, the cellar even got its own dedicated kitchen, so we are now well placed to hold food and wine matching events in here, with mini tasting dishes to accompany each selection of wines.

The cellar itself has seen a series of the great and the good pass through its doors for our vinous gatherings, from sports personalities to famous actors, visiting ambassadors to recognised journalists, along with a long line of students sitting their WSET qualifications with us. Presiding over them all is Maureen, our head Wine School waitress. Remembering each and every customer who walks through the door and their personal seating preference, she is our indispensable guardian of the cellar, and facilitator of all of our Pickering Cellar events.

Visit the Pickering Cellar yourself by attending one of our Wine Schools.