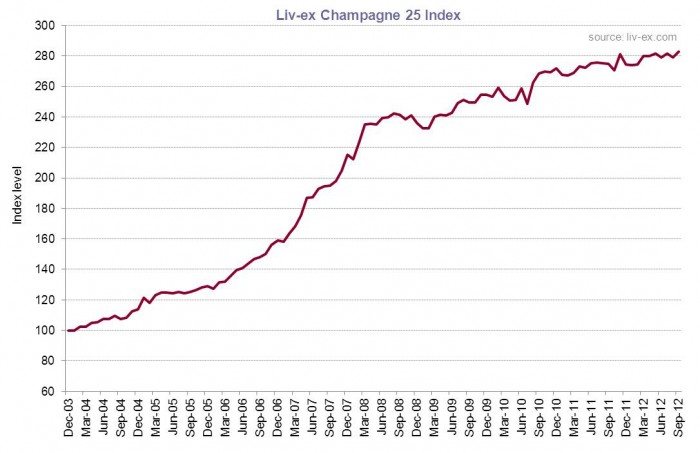 With the end of year in sight, a few rays of sunlight have brightened the fine wine outlook over the past month. Christies reported a series of lucrative fine wine auctions in Hong Kong (23rd-25th November) including a rare private cellar focussed primarily on Bordeaux. Decanter published an article headed ‘Bordeaux prices ‘stabilising’: analysts’ supporting our previous market reports that it looks as if the market is stabilising.

In addition, prices for Ch. Mouton-Rothschild (together with Ch. Haut-Brion the most affordable First Growths in the market) have not only stabilised, but saw the first positive upturn in 18 months and account for 22% of trade by value on Liv-ex last month (its highest share for over a year). The Annual Hospice de Beaune auction on the 18th November was a success and raised a total of €5,402,333 (total sales were up on last year, though average prices were down between 6-10%); an extraordinary result considering both the vintage and the economic climate.

As mentioned in our last market report, Bordeaux remains the core of the fine wine trade, but diversification can be advantageous. Despite the economic climate, Burgundy prices have remained stable partly due to the miniscule yield in the most coveted vineyards and an increasing interest from the Far East. As the graph below shows, the market is also showing a continued interest in premium Champagne despite high production levels. The Liv-Ex Champagne 25 is made up of a multitude of vintages of the three Champagnes with the strongest secondary market (Dom Perignon, Cristal, Krug).

November saw our entire Fine Wine team visit Burgundy for the 2011 vintage. A relatively early harvest has produced grapes with good phenolic ripeness, but lower sugar levels resulting in beautifully defined wines reflective of their terroir with lower alcohol than we have seen in the last few years. Our 2011 Burgundy En Primeur will take place at the beginning of January and information will be sent out between Christmas and New Year.

Finally, Robert Parker will be releasing his much anticipated 2010 Bordeaux bottle score in December as well as his bottle scores for 2010 Northern Rhône. His bottle score of the 2010 Southern Rhônes saw a surge in sales and a high level of perfect scores for the 2009 clarets in April had a positive affect both in terms of prices and volume trading. Mr Parker has made some very complimentary comments towards the 2010 vintage; the final grading may provide the Bordeaux châteaux with the perfect Christmas gift!