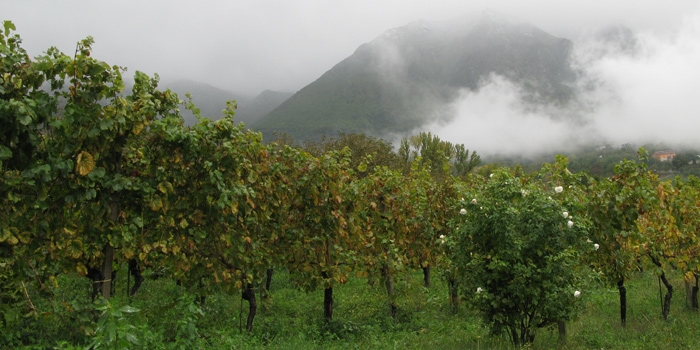 New to the Berry Bros. & Rudd Italian range are the white wines of the Picariello family, whose cantina lies high up among the Irpinian hills at Summonte, close to Avellino. Ciro is an architect by training who turned winemaker once he met his wife Rita (Guerriero), owner of the land! Together with their daughter Emma (a biotecnico with green fingers) and son Bruno, a viticultural school graduate, they make approximately 50,000 bottles/year from 7hectares, principally of Fiano di Avellino and Greco di Tufo but also some Aglianico too.

In fact when I visited them in October they recounted how Summonte was formerly famous for its hazlenuts, then for its black grapes before realising the potential of Fiano, that’s grown on the nutrient poor, limestone and volcanic soils that cling to the mountain side. Fiano’s name being made in the villages of Lapio and Montefredane; the latter is where the Picarielli have another plot of older vine Fiano, grown on hotter, clay soils.

Pliny apparently mentioned Fiano yet Greco di Tufo is the wine that’s become more fashionable. Ciro told me that in the past Greco was made at a searing 12 grams/litre of total acidity, thus giving it (mouth-puckering) longevity (and fame). Ironically, Fiano has more natural acidity than Greco, while Greco is richer in sugar/alcohol; Greco also has a tendency to oxidise prematurely (hence the formerly high levels of acidity perhaps).

Tasting the 2012 Fiano di Avellino wines from tank (Ciro has no wood in his cellar), the differences between Summonte and Montefredane Fiano were so clear: the white flowers of Summonte versus the mandarin notes of Montefredane! It was instructive to taste the Greco 2012 alongside. Ciro has Greco vines in Montefredane as well as buying fruit from Prata, near to Tufo. The whiff of sulphur differentiating the Greco from the Fiani immediately, while the palate, true to form, showed more citrus richness and alcohol.

And I never knew that the Campanians sent their Tufo sulphur to France to help them combat oidium in the 19th century. I wonder whether it shared the same train with Aglianico from Taurasi!