The Dichotomous Life of Champagne 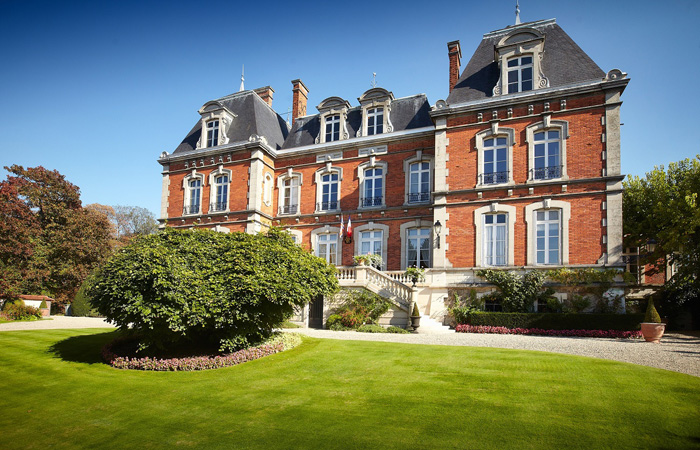 Creating a bottle of Champagne is a game of two halves: from the first fermentation with its viticultural processes of harvesting and fermenting for a pure and raw still alcohol, to the second fermentation of adding dosage and yeast to create bubbles for the glossy finished product. Two different processes, culminating in the same thing. And so, it seems were the two chateaux Bollinger and Pol Roger that we had the privilege of visiting in September.

With just 20 years between their founding dates, these two acclaimed houses couldn’t be more different. If Bollinger is about tradition and small scale, Pol Roger is about modernity and an annual turnover in excess of 1.5 m bottles. The rustic, traditional scenes at Bollinger versus the tardis of steel and automated production lines at Pol show how two producers can be just so varied in style. Most notable were the appearance, production and champagne styles as we would later discover.

Firstly the outward appearance, including the buildings and welcome are markedly different. The beauty of going to small viticultural regions is the relaxed charm of the towns. Epernay was no exception and the train journey there – through great swathes of rolling hills, verdant pastures and remote buildings – gave a picturesque passage into the opulent town. Nevertheless, the varying styles of architecture in close proximity was overwhelming: Bollinger is semi-rustic and Pol Roger is modern. 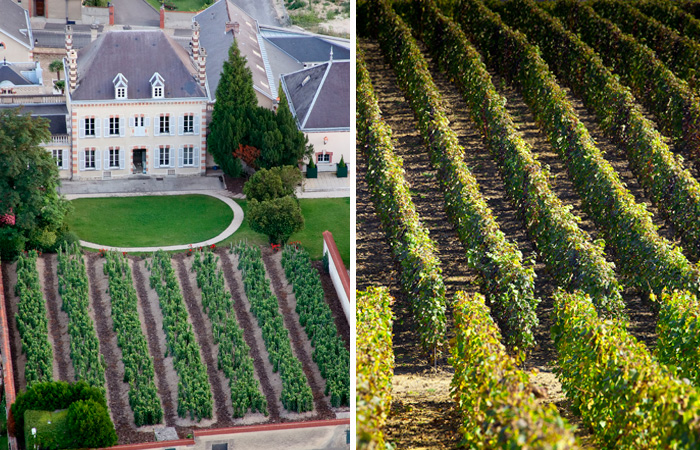 We arrived at Bollinger (est. 1829) on a sun-kissed autumn evening, perfect for a first-view of the Chateau in Epernay’s hilly hinterland. Close by was a farmyard-like, high-ceilinged outbuilding bursting with rows and rows of 50+ year old barrels and antiquated champagne-making machines. Down the sloping vineyard, through cobbled streets to a charming low-lying courtyard, the production heart of Bollinger, houses the cooper’s quarters, a traditional stone room, speckled with shards of light from small windows, with wooden tools, unfinished barriques, and piles of old tartrate crystals dotted around various wooden benches. A sign of a man skilled at his craft, and proud of traditional methods! Then to the cellars: riddling pallets galore and piles of cork-sealed first-fermentation bottles ready for blending sur latte. A distinct august feeling swept over from the smell of ‘old’: a welcome dust, like a sense of knowing and experience.

On a bright crisp autumn morning, conditions a viticulturalist can only hope for just before harvest, we arrived at the town-centre Chateau of Pol Roger (est. 1849). With sunrays streaming through the large windows of the high-ceilinged house-cum-office, opening onto the magnificent driveway and stepped lawn, we took a short walk. From a clean, sunshine-dappled courtyard with not a vehicle in sight into a super-smart, high tech, science fiction scene, low on human labour, before we were whisked into rooms and rooms of steel tanks of varying sizes in clinical white halls. A giant lift catapulted us down to Pol’s 7km of darkened cellars with rows and rows of riddling pallets, pupitres and crates of neatly laid-out wines: a sense of newness and productivity.

Secondly the production methods are polarised between the two vineyards, despite their close founding dates. Cellars run from 2m to 35 m underneath the surface throughout the Champagne region. All tunnels from every Chateau converge, and since modern times have been bricked up, dark and cold, to separate them! So Bolly and Pol Roger share production/storage space, but this is where the similarity ends! Bollinger uses a more traditional production method whereas Pol predominantly uses steel tanks and is machine dominated. 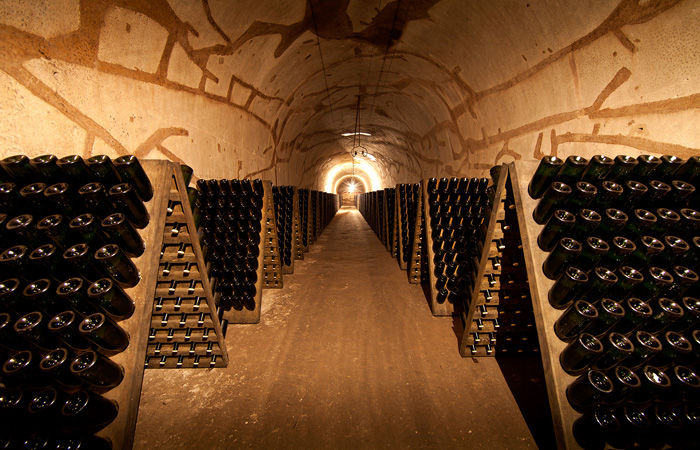 Bollinger blends are mainly based on Pinot Noir, first fermentation is in old oak barrels, some of which are 50 years old! Mainly American Oak is used, and individual blends are given ample time to mature. Extra ageing before release, well beyond the appellation rules, produces a majority of Reserve wines. Also Bollinger mainly uses natural cork and a light dosage to preserve the Brut style.

Pol Roger blends are mainly based on Chardonnay, and the first fermentation is invariably in steel tanks, with a small amount in oak casks. The production line is super-efficient and low on human labour – it is mesmerising to watch the machines! ( See video).

Thirdly, the Champagne styles are opposed, reflecting the characters of each house. Just as the Burgundians place special emphasis on the bouquet, the Bordelais on the palate and structure, so the Champenois claim the finish and, in particular, the aftertaste as a special feature of their wine. Pol Roger is lean, muscular and lithe and there’s a certain urgency to it, Bollinger is far more voluptuous and laid back in style, as these six wines showed:

Perfect with tomato and crab presse La Grande Annee Rose 2004 did not disappoint as our first wine with our meal. Light, delicate and with a hint of strawberry notes and a fresh savoury finish from the Pinot Noir, it was lighter than the non-vintage equivalent that we also tried.

The ‘ultra prestige’ champagne Bollinger R.D. is matured for at least 8 years and is James Bond’s favourite! Not surprising, as the slow yeast autolysis produces a rich, and elegant fizz with complex toasty and citrus notes that complemented the Strawberry and Rose Millefeuille at dessert perfectly. A great wine for drinking or storage for another ten years.

The surprise of the evening was a rare Pinot Noir Coteaux Champenois called La Cote aux Enfants 1999 – with mushroom notes, herbaceous, savoury, light tannin it was amazing with the lightly nutty, salty Comte de Reserve cheese. Only produced in good years, this single vineyard Coteaux Champenois has a very high sugar/acidity balance. Next year Bollinger will sell a very small amount. Legend has it that the origin of the name is related to the vineyard’s steep slope, where only children could work, another nod to the history and tradition surrounding this cheateau.

Upon arrival at Pol Roger we tried a first fermentation Pinot Noir – pear drops and sweet nectar – a great non-alcoholic tonic after a slight hangover from the previous day! Then to a sumptuous lunch…

Feminine, fruity and intense, Pol Roger Brut Reserve stands well on its own. With an equal banace between Pinot Noir, Chardonnay an d Pinot Meunier it is perfect for the cellar or for drinking on its own, as we did before lunch!

For those who like Chardonnay-only Champagne Pol Roger make one of the most delicate and crisp. Blanc Des Blancs 2000 shows Pol’s ability to create a single vintage. Biscuity yet creamy with crisp acidity and chalky undertones, it was showing incredibly well alongside the lobster in white butter sauce. Slight buttery notes from the Chardonnay filled the mouth while acidity cut through the rich, light butter sauce. Light apple and nutty notes lifted the pure and juicy white lobster meat. A crisp, full and taut Champagne.

The steal of the show was the reliable yet ever-sublime 1999 Winston Churchill Crisp, intense, robust, full-bodied and mature in flavour, it was the perfect compliment to the light and tangy apple tartlet with sweet vanilla ice cream. Only ever made in the best vintages, the rains that fell during the vendange in 1999, were more than double the average, yet did not prevent the harvest from breaking records. A great wine for developing further.

Three structured Champagnes, all similar in backbone yet delicate in style in their own ways.

In summary, despite their differences, both houses are immensely charming and produce excellent products. Enhanced by the food choice, to pick a favourite really is personal preference. I’d say that Bollinger tipped slightly for me: the extremities with which they adhere to their code of conduct, traditional production methods and sense of self struck a chord – reflected in their very characterful wines.

Treated to world class hospitality from both champagne houses we could not be more impressed by our experience. All in all, the trip was a great education in difference.  Definitely a place to visit again.

One Response to “The Dichotomous Life of Champagne”