A rising “star” in the British culinary firmament – Hand & Flowers 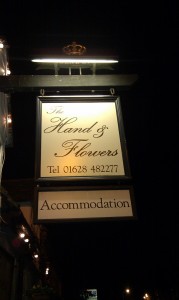 On the outskirts of the beautiful Georgian town of Marlow, one finds the gastropub that “would be king!” – The Hand & Flowers.

A brilliant white washed exterior expresses an almost humble non presumption of the culinary expertise and delights that await you inside.

The Hand and Flowers is owned and run by Head Chef, Tom Kerridge and his wife Beth.  Tom is probably most well known from the BBC programme “Great British menu”  where he competed against  some of the UK’s best chefs to get his dish included on the menu at a People’s Banquet in Leadenhall Market, City of London.  2011 seems to be the year for Mr Kerridge as not only did one of his dishes win the Great British menu 2011 but his Hand & Flowers also won the accolade of 2 Michelin stars! (Possibly the reason I found it so hard to get a reservation!?) 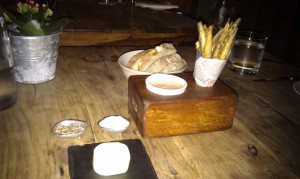 The atmosphere and interior are those of a welcoming, warm, low beamed public house.  We were waited on by some very energetic and attentive staff, and received the menu and wine list without hesitation.

Whilst waiting for decisions on the courses we were dutifully served with an amuse bouche of Whitebait and home made sourdough – a very pleasant surprise, being a fan of whitebait (a rarely seen dish these days). Anywhere that serves this as an amuse bouche deserves its 2 stars alone in my opinion. 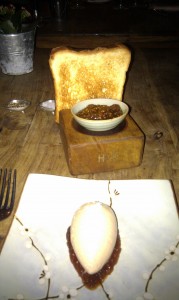 The wine list is brilliantly put together and very large with an eclectic and cleverly decided range all titled under flavour profiles in order to aid decision.  They offer a wide choice of wines by the glass, a great idea when some guests might be driving and a couple of bottles is just that little bit too much (but maybe not for some of my colleagues!) This also provides an excuse to match dishes with the appropriate beverage; a welcome treat, with such an interesting and diverse wine list to choose from. 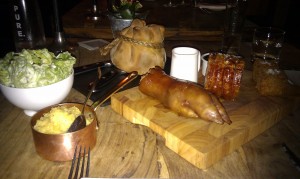 Now be warned the main dish we chose “Roast hog with salt baked potatoes and apple sauce”  is made for sharing and was a winning dish on the “Great British menu 2011”.  The brave and hungry amongst you could try to take on the whole dish but an epic dish it is.  Laid out in front of us in two separate visits to the table by our waiter;  Perfectly cooked Pork belly with crackling (to die for!), Pig’s head (braised for the whole day and then seasoned, formed in cubes and deep fried! Not the best title for a dish but tasted wonderful rather like  Ham Hock in texture, stuffed Pigs trotter, Potatoes cooked and served in their own salted sour dough casing, Apple sauce and Gravy – all served with a mug of 8.9% Cider and not forgetting the complimentary Cos Lettuce salad – One needs his greens!

A feast to behold and one to slice up yourself – the dish was served with carving knife et al.  Believe me if the dish’s remit was to promote the idea of sharing – that was indeed the result, as I shared half the dish with the surrounding table – as obviously my carving skills were not up to par.  But this was really nice and differentiated this 2 Michelin star establishment from others, a place with no pretence and food as it should be – to enjoy – be it on the table or on the floor!

To accompany the main course I chose a glass of the excellent Chateauneuf du Pape “Cuvee Prestige” 2008 from Sabon, the lovely meaty richness of the Grenache grape matching perfectly the fare on offer.  Obviously after receiving the dish I realised that this was not necessary as the Roast Hog was served with its own local Cider and a powerful one at that *8.9%).  The epitomy of British produce and fare at its best.

For dessert, it frankly would have been rude to go have gone for anything else apart from the “Hand & Flowers Chocolate Cake with Salted Caramel and Maple Ice Cream” – This was wonderfully rich and indulgent dessert – made even more indulgent by the accompanying glass of dessert wine (Beerenauslese 2007) from the eccentric yet brilliant Austrian wine maker – Willi Opitz.

I rang up and made my reservation not long after they had been awarded the two stars and the next available Saturday they had free was in February 2012!  So my booking was for a weekday but just goes to show you that if it was popular beforehand, getting a booking now is either for the very lucky ones amongst us or those with a lot of patience!!

Bravo to the whole affair – the food was impeccable, service was great and the whole experience far from being stuffy, had about it a true sense of “laissez faire” and fun.

P.s. Time to go for a run and burn off that entire pig I’ve just eaten!