Berrys in Burgundy – Tasting the 2010 vintage 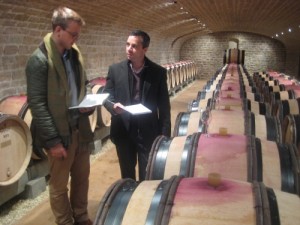 Our annual tasting trip to Burgundy is undoubtedly one of the highlights of the year for me, and it is also one of the most challenging trips – we generally average just under 100 wines a day and these are cask samples, not the finished product.  As such they demand a great deal of attention, and can occasionally be a little tough on the teeth, mouth and gut.

Thankfully the 2010s were for the most part a joy to taste, the reds particularly so, and our award-winning selection of growers have all done very well in what was a very difficult season.  To quote our host at Domaine Sauzet: “2010 was a difficult but beautiful vintage”.

Poor flowering and an indifferent summer made for small bunches of small grapes and at the end of August well, things didn’t look too bright.  A beautiful September, however, came to the rescue and the berries, aided by their small size, ripened perfectly.  Ironically the poor flowering at the beginning of the season is what has made this vintage a good (and potentially great in some cases) vintage. 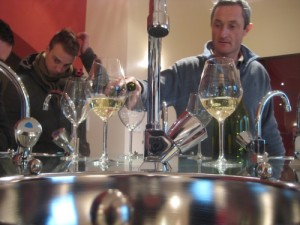 The whites are edgier, tauter than their flamboyant 2009 counterparts.  If they have a hallmark it is an intense minerality that will appeal to those whose palates favour a classic, structured style of white Burgundy.  Chassagne-Montrachet seemed to do particularly well, as did Corton-Charlemagne.  Their ageing potential depends more on the grower this year: the likes of Jobard and Gagnard have made wines that will repay some time in the cellar, whilst Patrick Javillier’s delicious Meursaults will be tempting as soon as they are shipped.

The reds are rather special.  The small, ripe berries have made for wines with some of the juiciness of 2009, though with a more classic structure and perhaps more finesse and poise.  We are spoilt for quality with our selection, and looking back at my notes it is clear that I liked and rated pretty much everything.  The particular successes that spring to mind are Christian Serafin, whose wines just seem to get better and better, Etienne Grivot, whose wines are now firmly in the Champions’ League spot, and Burgundian Willy Wonka Nicolas Potel – an outstanding selection across the board (and which won’t break the bank). 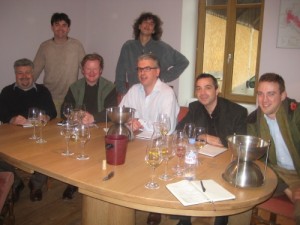 We finished the week on Armistice Day and, having paid our respects at La Roche Vineuse (we even had a cup of tea with the mayor), we visited Olivier Merlin – the best winemaker in the Maconnais as far as I’m concerned.  Olivier’s wines were as fantastic as they always are, and a bottle of his 2009 Moulin a Vent, La Rochelle, went down perfectly with a delicious lunch after the tasting.  An excellent end to a rewarding week.

One Response to “Berrys in Burgundy – Tasting the 2010 vintage”