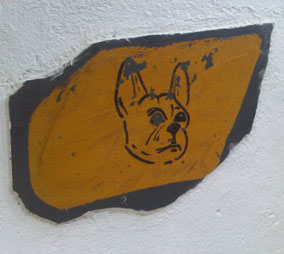 El Bulli was awarded its third Michelin star in 1997, and has ever since been fêted as the most original, most adventurous and most fabulous restaurant in the world, its owner Ferran Adrià (in us in the picture, further down) seen as the father of a style of cooking that has been imitated throughout the world, most famously in England at The Fat Duck, but with few, if any achieving its brilliance. And now, what a disaster, it’s to close for two years; that is to say for the 2012 and 2013 seasons (a season is June to December only), some fear it may be for even longer.. ……….why? Most clearly not for want of inspiration, if our 35 courses were anything to go by, and certainly not for lack of popularity, judging by the legendary length of the waiting list which makes the Ivy appear under-booked by comparison.

There is plenty of speculation; one angle is that the restaurant is reported to lose €500,000 per annum; such is its attention to detail. Another, perhaps, more whimsical, is that Adrià is weary of ‘serving up disappointment’ to all but 8000 guests from  the 2 million or so who try to reserve a table every year …. Whatever the reason, we were fortunate indeed to be at the table of the charming Amelia Aragon, and her brother Oscar, from the Cillar de Silos Bodega in Ribera del Duero, also her husband Gavin and Richard Bigg from El Camino in the UK…. The weight of expectation was almost over-whelming…………let’s preface what follows by saying that we were far from disappointed. On the contrary.

A short drive north of the resort of Roses, itself amazingly close to the French border, therefore Collioure and Pérpignon, Bulli nestles in 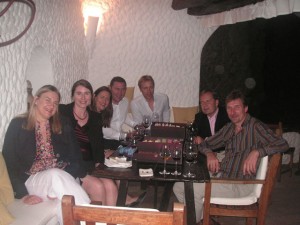 an a gentle bay,  calmly basking in the gentle aromas of pine and eucalypt. The restaurant is moulded into the hillside, the Cap de Crues seeming almost an extension of its ambiance and magic. This, on the eve of the Festival of Saint Juan was significant indeed, with the families on the beach, and later, fireworks serving to add to the very special atmosphere. The restaurant itself is unassuming, bright and breezy with the kitchen, as it should be, centre stage, framed by a large picture window as the heart of the Bulli experience, with Ferran himself happy to be photographed, endlessly, next to the bronze bull on the preparation table, at the same time marshalling the dozens of chefs with supreme confidence. The 70 or so staff easily out-numbers the number of guests (50); their calm redolent almost of a colony of bees, ants even, if that doesn’t sound too pejorative. But happy souls all; Bulli is completely serious but does not take it-self too seriously. The trinkets of the eponymous bull-dog are playful and prevalent; the spirit of local-boy Dali is pervasive, not least of course in the kitchen, where the alchemical symphonies are born in Ferran’s note-book, composed in a completely different key every day, in homage to the infinite diversity of nature, and man’s capacity to nurture it. This note-book is valuable indeed; it has something of Leonado da Vinci about it, the notes punctuated by drawings, diagrams and formulae which appear to lend more to trigonometry than gastronomy. Construction, deconstruction, aesthetics and symbiosis capture the process, reflecting the ephemeral nature of food itself and our duty to respect it. The watch-word here is ‘deconstructuralisation’, the mood experimental, infinitely creative and fantastically imaginative.. The rules of the game are based on a respect for the natural process, however, and here I would suggest Ferran perhaps departs, temperamentally, from Salvador Dali. Finally everything cedes to the food itself even the ‘plates’ and cutlery, many of which were initially non-existent and when they did appear were frequently shaped, bizarrely, coquettishly to best show off the food. Like Dali’s clocks, perhaps, but with a more positive and energising purpose.    Everyone and everything here resonates with a spirit of humility, refreshing in such an august establishment and yet far removed from any Calvanistic rigour. We are in Catalonia here and we are here to have fun. 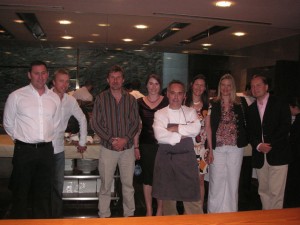 After the kitchen its out onto the terrace and the gastronomic odyssey begins. Soon forgotten are the parched rigours of Ryanair and the indulgences of the Costa Brava. Now, and throughout, we are in the hands of the knowledgeable staff and the gifted sommelier, another Ferran (Cantelles) and sometimes at their mercy as they patiently reveal the secrets behind the dishes, the subtle and beguiling combinations, one saucerful of secrets after another.. This is to be an opera in five acts; Act One being  the ‘snacks’, Act Two for the tapas, the key Acts Three  and Four for the ‘avant postres’ and the ‘postres’ and the final denouement, back on the terrace, for the morphings…

One could rehearse in minute detail every single dish and attempt to explain their significance to the ensemble and the incredible resourceful quality behind their genesis. But in all honesty my expertise and descriptive capacity pales in front of so much colour, so better for now, as a humble blog ‘amuse bouche’ to provide one or two impressions and pick out a few highlights. One can not ‘reveal’ the menu per se, as there is no tangible menu card or at any rate anything resembling stasis in a world of imaginary prestidigitation, the architecture of which defies any clumsy analytic despoliation. One is presented with the menu post facto, printed for that day only, for that meal only and for that individual only. A souvenir like no other.

One of the key themes, perhaps, is the challenge to appearance and expectations..The seemingly sweet becomes savoury, the obviously 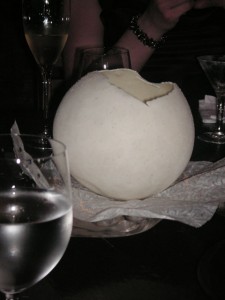 salty is in fact sweetness itself and depth and texture beguile, flatter to deceive, fascinate and invite cerebral analysis. The ceremony is ludic as one is permanently ambushed by ideas. From the outset…………with the sugar cane mohito then the so-called handkerchief….. a delicate wafer-like edifice, its filigreed elegance concealing  an incredible depth of flavour…..ginger, hazelnut and more, then sweet sweet bitter cherries doused in alcohol,  a snow gin fizz which somehow achieved a juxtaposition and inversion of the sensations of warmth and cold,  and a extraordinary frozen Gorgonzola globe (above right), which almost disintegrated after its magnificent assault on the palate. Then the mimetic peanuts with their marriage of Campari and tangerines and the spherical olives, with their oozing explosion of liquid engineering, also known as olive oil…Wow……… And we were still in out on the terrace….

As important as the element of surprise, is the complete symphonic saturation of the senses. The textures defy the touch; the colours are bright and vivid, the aromas beguiling, achieving an effortless interface with the salty sea-air and the distant sounds of the sea itself are mirrored in dishes such as the ‘pond’ where one is obliged to ‘smash one’s way into the frozen casket of mint and green tea. The wave of gustatory indulgence crash onto the rocks of certainty and everything challenges and challenges again. There are of course certain leitmotivs, but they are far from the unsubtle over-use of nitrogenous foam or a facile recourse to bizarre pairings; there is, for example quite a lot of Japanese influence, the umami flavourings finding favour, and there seemed to be quite a proclivity for parmesan, foie gras and almond. To name just three…………but this is just that, merely three of two hundred individual ingredients, all afforded a pain-staking and poetic symbiosis. 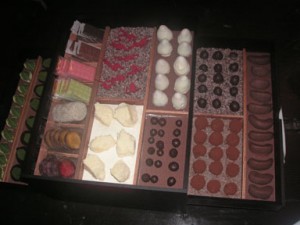 The imagination is constantly teased, the diner’s creative capacity almost sated as he tries to identify all the characters in an Opera which might make The Ring Cycle appear facile by comparison. The ladies in our group (as always, I suspect) were the best at identifying the particular tastes and flavours; Amelia excelled herself in picking out the artichoke and fennel, completely unrecognisable as either, in the ‘surprise dish’. It was one of thirty odd surprise dishes, if the truth be told, but the only one served blind. How to convey the riches without resorting to the clichés of the superlative? Impossible, but each dish was special and memorable. The flowers with nectar, their honeysuckle sucked out with bee-like delicacy; the green tea biscuits with their sushi flavours and lychee crystals; the oyster tartare consumed on a bed of oyster leaf, the white asparagus and miso soup, the melting Montjoli lentils, the coconut masquerading as caviar (and vice versa), the chorizo with ginger and honey, the apple baguettes and foie gras…one could go on and on. The meal itself lasted for six hours, but seemed far, far shorter…….like all the best and most rewarding artistic experiences. And there was plenty of room left for ‘petits fours’ aka  morphings (above left);  all sweetness and light, served from elegant cedar wood boxes and combining flavours of chocolate, almond, passion fruit, green tea, pistachio strawberry , raspberry, truffle and bitter chocolate…..the chocolate looked incredibly rich and heavy; it goes without saying that it was as light as a feather!

And what of the wines? Well Ferran’s selection was impeccable, and it was only afterwards that I realised that he had pretty much given us a who’s-who of the best Spanish white grape varieties. The Wine List stretches to 1600 references, excelling needless to say in Spain and includes page after page of venerable vintages of the greats; Artadi’s El Pison,  Allende’s Calvario and Aurus, Alvario Palacio’s Ermita 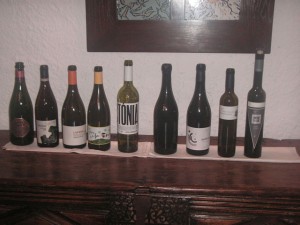 and Finca Dofi , CastilloYgay, Pingus .. and the like. Our selection demonstrated the versatility and textural magnificence of Spanish white wines, including a fantastically subtle Albarino, a 100% oak-aged Godello from Rias Baixas, a white Garnacha and the most extraordinary Xarel-lo from Penedes……to mirror the wonderful Cava which had been enjoyed at the start. This is the last time I am rude about Xarel-lo as a variety! The wines combined freshness with the most exquisite and deep flavours, often redolent of the orange grove or a citric orchard in early June. The reds and sweet wines were fascinating too, a 2000 Toro almost Bordeaux-like in its elegance and an example from Montsant a perfect demonstration the intensity and depth of flavour of old-vine Garnacha from these schistous hills. The sweet wines ran the stylistic gamut, from the pineapple pastry, anis and chocolate orange flavours of the Terra Alta, 100% Grenache Blanc, to the huge complexity of the Solera wine from Empoda, its infinitely intricate fractional flavours almost keeping up with those of the morphings. The sommelier was fantastically attentive, articulate and aware, but once again marked by a sincerity and humility that is often, dare I suggest, somewhat lacking in those of his profession.

And so to the final curtain, the dance having been expertly choreographed throughout; the guests elated and happy………….full and yet not full, but completely satisfied in every sense. And it is all about sense really, not merely the five senses that have been so rigorously explored, but about what Ferran describes as the sixth sense. This is not especially supernatural, but it has its intangible element and a psychological back-drop, which is perhaps the most personal and subjective of them all. It is according to Sn. Adrià, a synthesis of memory, expectation, irony, sense of humour, mood, occasion and judgement. It is, in other words, the complete emotional, historical and psychological back-drop to each individual’s experience. In creating an astonishingly diverse, challenging and humbling experience of this magnitude Ferran acknowledges the infinite and intangible complexity of this sixth sense and in doing so, raises the status of a mere meal to a synaesthetic art form, that has to be experienced to be believed. Let’s hope the sabbatical really is only a short one!