Garbellotto – where it pays to buy the best barrels 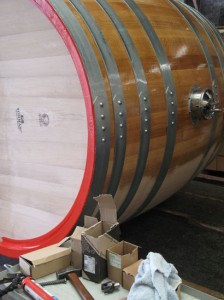 There was a time not so long ago when the sight of large oak botti in a (Piemontese) cantina was synonymous with the past, with dirty, unripe and tough wines. The spangly ‘80s and ‘90s were the decades of the French barrique (2.5 hectare litres); one whiff of which calmed all fears, reassuring the market that this was indeed a ‘modern’ wine, spotlessly clean and worth every one of those 95 Points. I recall, in another life as Burgundy buyer, priding myself on spotting the provenance of a domaine’s oak barrels before that of the wine; not hard  fortunately as they had chosen high toast alliers oak from Francois Freres, cloaking every wine in the cellar!

The barrique revolution spurred the traditional, large oak botti wine producers into raising their game: a touch less tea-leaf, more fruit please. And as Pieremilio Garbellotto points out in my interview, there’s been a concurrent leap in the understanding of the role of oak, with customers far more demanding and knowledgeable about the type of oak influence they’re after. Now they’re enjoying one of their busiest periods ever, aided by a new line in ‘off-the-shelf’ French/Slavonian 10 hectare litre barrels. Even staunch Barolo modernists such as Roberto Voerzio have recently bought in a battery of botti; the first time in 14 years since trading-in the botte for the barrique.

It was more a pilgrimage than business as usual as I finally arrived at the mecca of barrel makers at Conegliano, Veneto. The Garbellotto 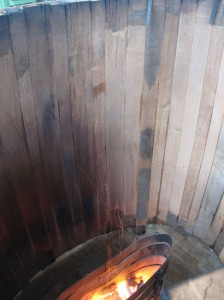 family have been in business since 1775, with three brothers Pieremilio, Piero, and Piergregorio now representing the 8th generation. Pieremilio, head of production, whizzed me round in his golf buggy, explaining how a third of the oak used is French, the rest coming from the Balkans (‘Slavonian’); the oak is either Quercus Petraia (compact grain) or Quercus Pedunculata (broader grain) – the more agricultural Quercus Alba is favoured by the American growers/coopers. Production is 80% botti (10-100 hectare litres), 20% fermenting vats, botticelle and yes even some barriques! Toasting is still traditional and time-honoured using a fire (right), gently preparing the wood rather than burning it via a fast and fashionable zap of a laser. The wood is seasoned for a minimum two years prior to use; and it’s not just oak but also the much revered cherry, pungent chestnut, acacia and even ash. All felled in accordance with the FSC agreement set up with the WWF; the minimum oak age being approx. 120 years old.