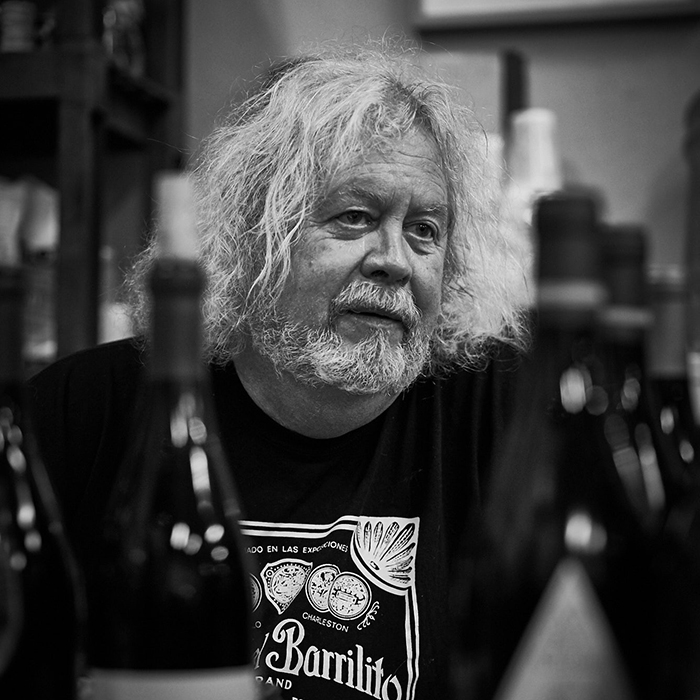 Au Bon Climat’s Jim Clendenen is one of the most colourful characters in wine. As the wine he has made for our own-label range lands on the shelves, Sophie Thorpe sits down with the man himself

Jim Clendenen’s chuckle is utterly impish. It’s the sort of laugh that has followed more than its fair share of unpublishable jokes. Jim – the controversy-breeding character behind one of California’s most famous wineries, Au Bon Climat – is, however, ineffably charming in his quiet brashness, radiating a fierce “don’t care” attitude and soft-spoken charisma.

“It’s always the ‘new’ news. Some kid comes along that has no experience, but he’s news. They’re talking about him like he’s established; the guy’s made four wines, and I’m not sure I like two of them!” Jim laughs. We – Jim, his son Knox (after whom one of the top Au Bon Climat cuvée’s is named) and I – are having lunch at one of his favourite restaurants in London – Sally Clarke’s, a reliably un-new addition to the Kensington restaurant scene that Jim has been frequenting for years.

I first encountered the shaggy-haired, larger-than-life character two years ago, and he is just as opinionated as during that first meeting. Talking about the state of California winemaking today, he is despairing. One of the producers behind the hugely successful In Pursuit of Balance (an “anti-Parker movement”, in Jim’s words), he hopes for elegant, poised expressions of California. And while there are more than ever before, he is – perhaps like any wild child that has been around long enough to be seen as the establishment – frustrated by the young upstarts on the scene.

While a new crowd lays claim to championing unusual varieties, he’s been experimenting since the beginning. “I made Chenin Blanc in the ‘80s and the wines were extraordinary, but it was such a commercial flop that the [vineyard-owner] pulled it all out. Now there are six or seven young, millennial, passionate winemakers that are making Chenin Blanc and they all come from the same vineyard, and the vineyard sucks.”

He’s much happier playing with the thousands of Chardonnay vineyards available to him; but has nevertheless planted some Chenin Blanc himself – close to the original site he used in the 1980s, alongside small plots of Grenache Blanc and Noir, a new clone of Nebbiolo that hasn’t been seen in the New World before, and enough Aligoté that he is now, he believes, the largest landowner of planted Aligoté in the US (with a grand three acres). He’s certainly not, however, hanging the fate of Au Bon Climat on these varieties – “it’s so totally minor, in comparison to things like Chardonnay. But it’s on the rise – ‘cos a lotta young people like interesting varieties.”

While Jim’s pinpoint, perfectly balanced styles of Pinot Noir and Chardonnay are firmly on the main stage, they’ve had ups and downs getting there. “Robert Parker invented me,” Jim admits; but Parker’s palate turned against the Au Bon Climat wines, at a time when his scores mattered. Today the critic is, in Jim’s view, “irrelevant”; but scores live on. Jim’s frustration is that scores offer such a tiny snapshot. “Somebody’s immediate reaction to the evolution of a wine that’s not evolved is pretty much irrelevant. It has nothing to do with the wine’s longevity or ageability. It has nothing to do with the greatness and potential.”

Concentrating as he does on Pinot and Chardonnay, Jim has made his peace with the Old World. “I would love not to be judged against Burgundy,” he says, but he is convinced that it is inevitable – in Côte d’Or the wines would simply be put alongside those of another producer in the region, people always looking for a suitable scale.

“People accuse me of being too mainstream,” he says sadly. Sitting across from the man himself, clad in his loud Hawaiian shirt, too much of our conversation drifting into an off-the-record realm, it’s hard to imagine how he could ever be seen as middle-of-the-road. But perhaps it is important to celebrate the idea that classical, poised styles of Pinot Noir and Chardonnay are finally more than rare, more than fashionable, maybe even normal.

The Au Bon Climat wines – with their moreish acidity, vibrant fruit and delicate perfume – are far from run-of-the-mill, but perhaps there’s nothing wrong with anything quite so good making it into the mainstream. Like their maker, they’re unlikely to ever blend into the background.


2016 Berry Bros. & Rudd Santa Barbara County Pinot Noir by Au Bon Climat: Crafted with fruit from a single vineyard in Los Alamos (called “Kick on”) by Jim himself, this is the first Californian wine to earn a place in our own-label range. This Santa Barbara Pinot offers heady fruit and spice with a silky, fresh yet concentrated wine. Jim’s looking forward to tasting it over lunch in the Napoleon Cellar in 10 years’ time; so are we.