Battle of the sommeliers 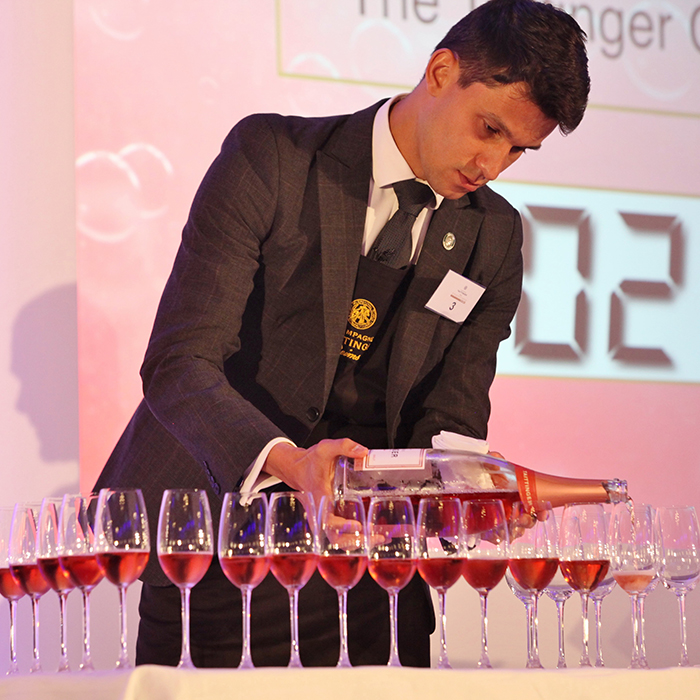 The sip-slurping masters of our wine lists do much more than just pour wine. We sent Sophie Thorpe to watch Britain’s finest sommeliers pitched against one another and to find out just what it takes to become the best

As slurping fills the room, my stomach turns. A nervous-looking man, sporting an apron and suit jacket, buries his nose deep in the glass in front of him, his hair slicked back, his glasses slipping slowly down his nose. “I think it is…” he sniffs again, takes a mouthful, swishing it from side to side, and the audience holds its breath, watching the clock count down – just 20 seconds to go.

A suave and continental crowd had gathered at The Savoy, an oasis of cool in mid-heatwave London – not that you’d know it from the contestants’ brows – to watch Britain’s best sommeliers battle it out for the title of UK Sommelier of the Year. In the hotel’s ornate ballroom, one lone table stood on a stage, its virginal white table cloth the court on which the afternoon’s fierce challenge would play out.

It seems almost ludicrous, a parody of itself, this comical combat of the perfect pour – yet from the very beginning, I was hooked, sucked into the nail-biting competition in front of me. This year our very own Nicolas Clerc MS (and a recipient of the prestigious title in 2007) was running the show – both on and off stage. A competition that has been going since 1980, it is a “celebration of the profession”, he declared. The judges, he said, are looking not just for someone who is calm, confident and in control – but someone who is also “a bit of a showman”.

Twelve sharp-suited somms had been selected for the finals, whittled down to three over the course of the day: after six hours testing their skills, Tamas Czinki from Northcote, Pierre Brunelli from L’Enclume and Alex Fréguin of Moor Hall had made it through to the final round, facing a further four hours of challenges.

The trials are gruelling: each and every one undertaken in front of a live and critical audience, with a strict time limit. First up was a test of their wine knowledge – spotting errors on fictional wine lists; next came the blind tasting – identifying 10 mystery liquids, six wines and four spirits, being asked to describe each in a different way, from strictly organoleptic to a customer-friendly pitch, or recommending a classic cocktail for one of the spirits (and woe betide them if they have confused their Armagnac with their Cognac).

After this tortuous tasting comes a practical challenge, with the judges taking on the roles of guests (“guests from hell”, as one speaker put it) at a restaurant. The contestants must provide perfect service to the most difficult clients and advise on wine pairings for a tasting menu, taking into consideration the customers’ interests, preferences and budget.

Finally – after a quick-fire quiz round which puts their knowledge to the test once more, Nicolas Clerc announces, “One more task, messieurs…” It is the moment the audience has been waiting for. Each contestant is faced with 20 glass flutes and a magnum of Champagne, their challenge to pour the entire contents of the bottle evenly into 20 flutes, without returning to a single glass, in under eight minutes.

Pierre nips up and down from table level anxiously, bobbing in and out of sight, Alex appears to keep his cool – casually concentrating on one glass at a time, while Tamas takes an almost overly-measured, painstaking drip-pour approach. It’s hard to turn a blind eye to the almost absurdity of this event, yet the tension in the room – and the sheer knowledge expected of these sommeliers – is testament to how much effort goes into good wine service.

In the blind tastings Alex Fréguin – a cheery, boyish, almost Billy Eliot-esque character – shocked the audience, totally changing his answers in the last 30 seconds of his nine-minute allowance. There was an audible gasp and the judging panel frantically shuffled papers in response to his U-turn. We, the stunned onlookers, feared it was the end of his journey.

Another of the trio – Tamas – provides one set of answers to three mystery wines and, as the time ticks down, he jabbers on about food pairings – concocting an elaborate option of roast pigeon with girolles, turnip purée and thyme jus. At the last moment, he questions whether glass number three is a Cabernet Franc, not a Pinot Noir after all… there is more tannin than he would expect, perhaps… Nicolas yelps “TIME”, and his indecision hangs in the air, pangs of pity reaching out to him as he looks crushed by his own hesitancy.

It was the young, happy-go-lucky Alex Fréguin – the comic of the group – who won the title in the end; for all three, the show – and their exceptional service is nothing if not the finest theatre – must go on.

03/08/18 The title of this article has been changed. It was originally published with the title “Battle of the somms”, which was not intended to cause offence in the least, but understandably did. We apologise sincerely for this oversight.