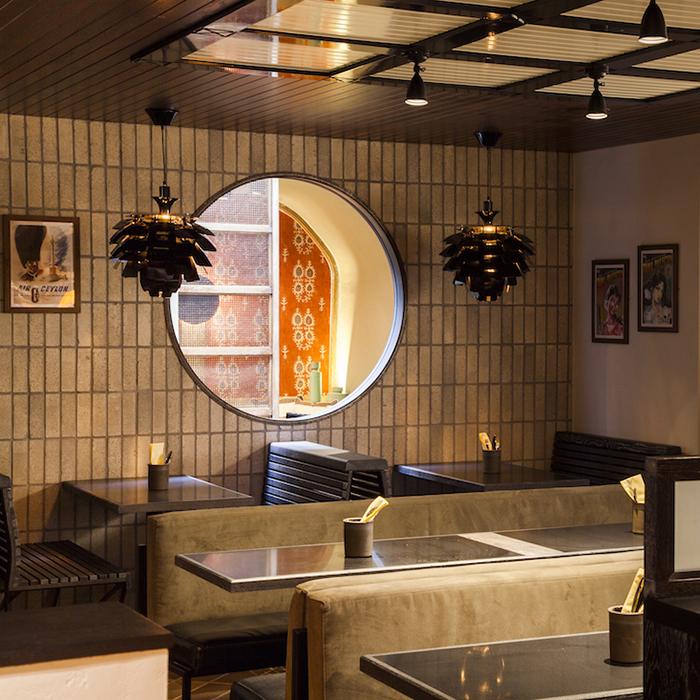 London’s second Hoppers is the latest in a series of restaurants challenging British perceptions of South Asian cuisine. We sent Alexis Self to Marylebone to sample its rich karis and famous flatbreads

Though a mere falafel’s throw from Dean Street, Marylebone is a world away in dining terms. Not here for the queues and sharing plates – its cobbled streets are lined with establishments with names like The Orrery and Chiltern Firehouse. It’s into this starched and folded environment that Hoppers’ second outpost has landed with a bang.

The original Hoppers, on Frith Street, has arguably done more for Sri Lankan cuisine in the capital in the two years since it first opened than has been done in, well, ever. Its success reflects the rise of southern Indian cuisine more generally, and particularly its ubiquitous dosas. Popular throughout South Asia, the humble dosa is a sort of light, savoury crêpe made using rice and black gram (a kind of lentil) – but, perhaps more importantly, it’s gluten free. Hoppers, from which these restaurants take their name, are even lighter, and even more gluten free… well, sort of. Made with rice batter and coconut milk they are crispier than dosas and cooked in a way that makes them curl upward, forming a delicious edible bowl – but more on this later.

Hoppers is the latest smash hit from JKS Restaurants – the incredibly astute group of sibling restaurateurs behind Gymkana, Trishna and Bubbledogs. Their new restaurant is more grown up than its older namesake – whose riotous colours and tiled floor have been replaced with varnished wood, leather banquettes and demure grey polo shirts. The décor has taken inspiration from the Sri Lankan architect Geoffrey Bawa and his Tropical Modernist movement – think straight lines and bamboo panelling. The effect is immediately more relaxed, especially given the room’s excellent acoustics which allow conversation to flow without throat damage. Most importantly, you can book a table.

As we sit down a bowl of spicy, dusty banana chips is placed in front of us. We chew on these while we order a few “short eats”. Bonemarrow varuval consists of chewy, unctuous meat clinging to two hefty sawn-off cow shins – after an attempt at knife-and-fork gentility, we pick these up and gnaw on them like cavemen. It comes in an ambrosial puddle of sauce which we mop up greedily with a roti – the first subcontinental flatbread of the evening. Completing the “shorts” category are mutton rolls – spicy meaty croquettes bursting with minced sheep – and devilled chipirones, squid battered in a mixture of Sri Lankan spices and topped with roughly-chopped green chillies. These are served with “SL hot sauce”, a sort of hot pepper sauce/sriracha love-child.

Hot food, curry especially, is often seen as the great wine destroyer – rendering even the lightest of styles utterly tasteless – but when it works, it works. Tipped-off by a colleague, we go for the 2014 Tempranillo from Torre de Barreda. A lighter-style Tempranillo from Toledo, its subtle liquorice notes offer the perfect accompaniment to the punchy flavours of the food, working as both palate cleanser and conductor – at £33 a bottle, it’s also tremendous value.

Next up is curry – or kari, as it’s known in Tamil. We order two copper dishes, one containing prawn and the other lamb, both cooked in a coconut-rich sauce. Their spice is tempered by bowls of cooling yoghurt, beetroot and kale sambol and the eponymous hoppers. Of these, we order one plain and one with an egg fried in the middle. They are sublime: subtly sweet and light as air.

Of all the new wave of restaurants serving up “posher” South Asian food, Hoppers is definitely going its own way. Its food is light and healthy, but without compromising the intense flavours that are a source of such beguilement to Western palates.

One Response to “On the table: Hoppers, St Christopher’s Place”