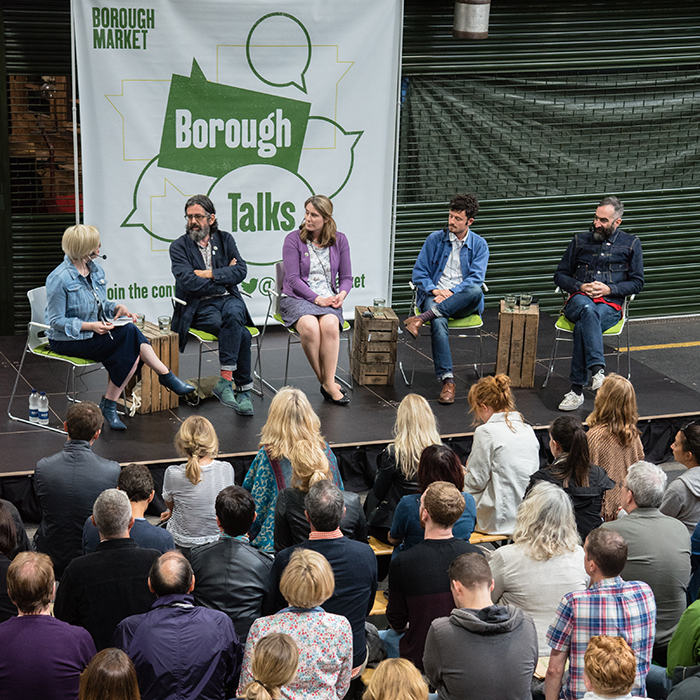 The panel in action

This week saw a panel of the very best in the drinks business discuss its future in Borough Market; we sent Lex Self to report on the action

Tuesday night saw the second iteration of Borough Talks – a series of public debates, held at Borough Market, dealing with the current state and future of the food and drinks industries. It’s been a tough month for this much-loved food market – one of the oldest and largest in London – where, for centuries, people from all over the world have come to work, eat, drink, and be merry; and traders are still trying to find their feet after the horrors of June 3rd. To this end, they are being helped by the incredibly worthwhile efforts of a relief fund, to which all revenue from the events is being donated.

Entitled How to join the drinks revolution, the panel discussion brought together four experts to discuss emerging trends in the drinks industry. They were: Dave Broom, a renowned spirits writer whose books have twice won the Glenfiddich Book of the Year award; Tony Conigliaro, the legendary mixologist behind 69 Colebrook Row and Bar Termini, among others; Dan Tapper, food writer and founder of Yorkshire nano-brewery The Beak; and our very own Buyer Catriona Felstead MW.

Unsurprisingly, it was not long before the word “craft” reared its plaid-clad head – much to the chagrin of Dan Tapper, who insisted it was heresy that multinational brewers were able to call their beer “craft” in the UK, while in the US special certification was required. Cat, equally bemused by the ubiquity of the word, explained that in winemaking “artisanal” often had the same cringe-inducing affect. What both agreed on was that homebrewing and distillation is no longer the reserve of odd-looking men in long coats who fish for eels in urban canals – it’s big business. Indeed, as Cat explained, the market is now so highly saturated that consumers will look for any way they can differentiate between brands, or, as she put it: they “don’t just care about the wine, they want to know the name of the producer’s dog”. All agreed that the craft beer revolution is reflective of a general movement among drinkers to “go back to basics”, eschewing bigger brands in favour of quality smaller producers. In the wine world, this is known as “minimal intervention winemaking” – an insistence on sitting back and letting nature take its course: a movement that has taken off in places like South Africa and Australia, but not so much in the Haut-Médoc.

That said, Cat then revealed that, despite an invigorated market and more savvy consumer base, a recent study by the WSTA revealed that the average amount spent on a bottle of wine in the UK is £5.40 – which, after tax, duty, shipping, etc, means only 60p spent on the actual liquid contents. This prioritisation of price would appear to give big multinational brewers, distillers and winemakers the upper hand; however, Dave Broom insisted that small producers still had an ace up their sleeve – authenticity. Though bigger companies can pay for slick marketing, clued-up consumers are able to see through this, and social media channels allow start-ups to communicate with and sell directly to customers. Dan Tapper urged smaller brewers and those starting out to eschew marketing agencies in favour of a DIY approach – starting with telling their own story. This was echoed by Tony, who gave examples of new bars that had opened in London and tried to find a shortcut to prosperity, rather than focusing on the important thing – quality and personality.

Miraculously, we’d managed to go an hour without mentioning the biggest buzz(kill) word of the moment: Brexit. Never fear, Tony heavily alluded to the current state of economic uncertainty. He spoke of why London currently possessed the most dynamic cocktail scene on the planet, praising the affect that the presence of so much international talent had on innovation. Indeed, as I sipped on one of his “Snow” cocktails – created to simulate the sensation of a snowflake falling on one’s tongue, of course – I mused on how far London had come in this respect, from being the inspiration behind Hogarth’s Gin Alley to the home of so much positive innovation.

The next Borough Talks will take place on Tuesday 12th September and will deal with the issue of sustainability in food production, questioning whether a modern city can develop the infrastructure required to feed itself.