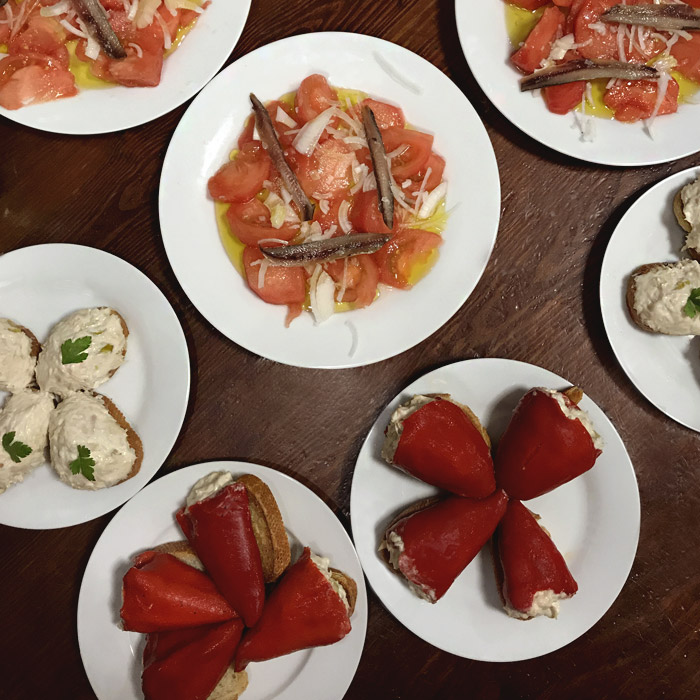 Txokos are societies dedicated to celebrating northern Spain’s extraordinary culinary and vinous heritage. Food writer Victoria Stewart reports on how these gastronomic gatherings came about and what goes on behind the societies’ (normally) shut doors

Sitting in a room that feels like the intersection of a village hall and a somewhat dated restaurant, on one side I see a group of men of all ages seated around a table and several glasses of cider. Meanwhile our crew of 10 – including food writers and two local food guides, one of whom has invited us – are opposite, passing around bottles of Txakoli, the locally made dry white wine, and platters of bright tomatoes drizzled with olive oil.

I have come to take part in a txoko (pronounced “chokko”) in San Sebastián, northern Spain. Translated as “little niche”, a txoko is a kind of gastronomic society (sociedad gastronómica in Spanish) where food and drink is a friendly vehicle for celebrating people and produce, and there are numerous examples all over the Basque region, with over 200 (containing members of up to 200) in this city alone. The food served depends on what is produced nearby – so in the case of San Sebastián there are white wines from Getaria, fish and seafood; further inland it might be red Riojas and vegetables.

My visit is to Peña Hipica, a mixed sociedad set up in the 1950s, where the €30 monthly membership fee covers the use of the space (most were purpose-built with professional kitchens), crockery and cleaning. As each is set up according to what its members want, here a committee of volunteers is responsible for buying alcohol – and visiting relevant local vineyards – while whoever is cooking buys the produce, and everyone pays an “honesty” bill at the end.

Our chef tonight is a cookery teacher called José who says he loves it “because txokos are never competitive – it is about eating, drinking, sharing, and having fun!” Having taught many influential chefs in the area, our host – longtime member and local food guide, Gabriella Ranelli – describes him as “an honourary member of all txokos because of the work he does”.

José’s brilliant menu includes fluffy bread made in a local bakery, anchovies of incredible saltiness, with dark pinky grey skins that glisten under olive oil, and a plate of bruschetta with egg and tuna and mayonnaise – typical Basque bites which Ranelli describes as “my all-time favourite”. After this, things ramp up as we try langoustine with red and green peppers, intensely salty rare beef and, my highlight, lusciously sweet confit peppers; dishes that taste so good they cause one of our companions to insist we award it a Michelin star.

As to the origins of txokos, there are different theories. One is that, around 1868, something called the sociedad popular was invented, giving working people (namely artisans and fishermen) a place to socialise after increasing numbers of taverns and cider houses closed at 10.30pm. Today, however, they are still considered special places where people of different backgrounds and genders (although some are men-only) can come together to drink, cook – or watch a member cook – and share the bounty.

In his 2007 essay The Social Bonds of Cooking: Gastronomic Societies in the Basque Country, sociologist Andreas Hess argues that the popularity and success of the txoko in “contributing to the maintenance of a civic equilibrium in society” is down to the sense of conviviality. And it’s exactly this atmosphere that I am struck by above all tonight. Being “neither purely public nor purely private institutions”, he writes, “rather they occupy a unique space somewhere in the middle of the continuum between the public and the private sphere” where eating together “at least when organized collectively and when sensibly institutionalized – can have a positive function”.

To Ranelli, who comes regularly and likes to cook whole fish and revuelto (a Spanish scambled egg dish), Peña Hipica is an important feature of life here. “It’s so fun!” she laughs, just as José, having finished the cooking, joins in: “So”, he smiles. “Who wants more to drink? A little rum perhaps? Go on…”