Notes from the vineyard: riddle me this 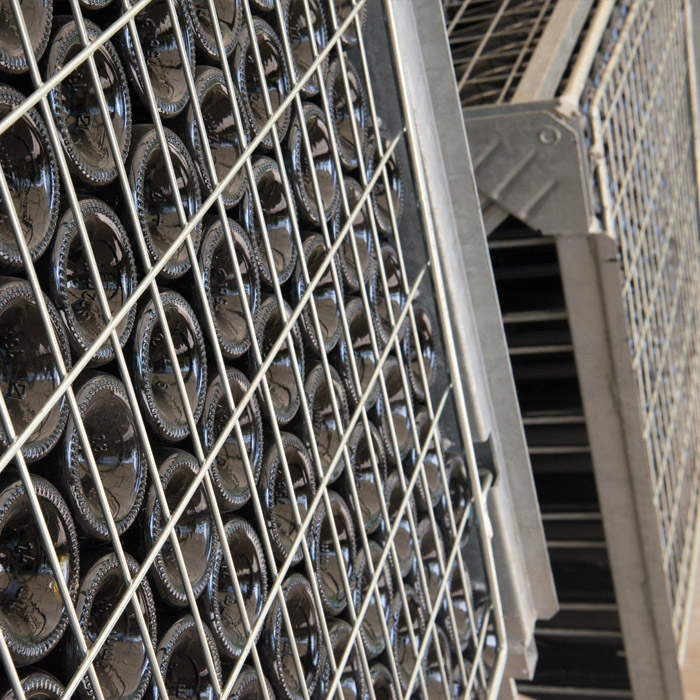 As we continue to follow life at Nyetimber, we leave the vines behind for the winery this month, as Brad Greatrix examines two important stages in sparkling wine production – riddling and disgorgement – and their impact on the wine’s flavour

The practical goal of riddling is to slowly rotate and tilt the bottle in a way that yeast will slide down into the neck of the bottle. This can be done either manually or on automated machines called gyropallettes. At Nyetimber we have always used gyropallettes because there isn’t any quality advantage between the two techniques, but automating the process provides additional reliability and reassurance that all bottles will be handled identically. Besides the practical aspect of accumulating the yeast in the neck of the bottle, riddling also significantly reduces the surface area of exchange between the yeast and wine inside the bottle. It’s not hard to imagine how that change in yeast surface area can affect the development of a sparkling wine. For that reason, the date of riddling is an important stylistic consideration, and for several years now Nyetimber has been making riddling dates available for each and every bottle that we produce (more on that below).

Disgorging is the process whereby the yeast is fully removed from the bottle. This is accomplished by freezing the neck of the bottle, so that when it is opened a frozen plug of wine is expelled under pressure, and takes with it the riddled yeast. The clear wine remaining inside the bottle then has dosage added (a wine-sugar mixture), is topped back to 750ml and then a cork is inserted.

Choosing the dosage for a wine is an important consideration, and is often a highly-guarded secret by sparkling wine producers. Winemakers have many options available to them for producing dosage if they want to make an adjustment to the style of their wine. For example, dosage could be made from oaked wines, separate reserve wines or other cuvées – even Brandy and Cognac are permitted. However, because Nyetimber wines are produced exclusively from our estate-owned vineyards, we want our vines to shine through in our wines. Therefore, our dosage is almost always produced from the same wine as that being disgorged (for example Blanc de Blancs 2010 receives a dosage from Blanc de Blancs ‘10). We believe that if there are balance or flavour issues to be corrected at disgorgement, then you haven’t done your job correctly at blending, or out in the vineyard. 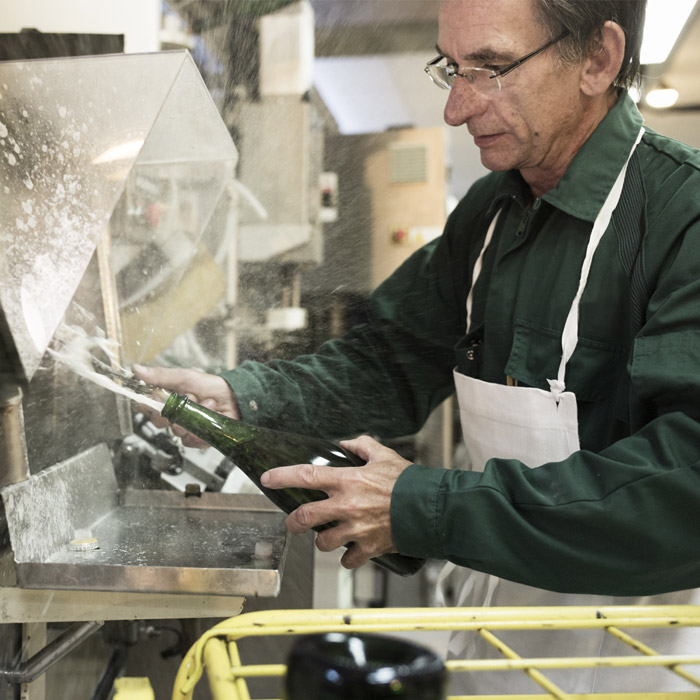 Yeast removal and dosage addition are the headline parts of disgorgement, but I would be remiss if I didn’t mention oxygen as well. When the wine is disgorged, it’s inevitable that some oxygen will enter the headspace of the bottle. If left there, this can accelerate the ageing of the wine after disgorging. And if the amount of oxygen varies between bottles, then so too does the rate of ageing. To remove the oxygen, and thus regularise post-disgorgement ageing, Nyetimber was an early adopter of a technique called jetting. This simple and elegant technique involves injecting a tiny drop of water (just a few microlitres) into the wine just before corking. The drop is injected at a high velocity, which provokes the wine foam slightly, and the rising foam pushes air out of the bottle. It’s hard to judge the extent to which jetting extends the life of a sparkling wine after disgorgement, but there is no question of its significant effect on consistency.

After disgorging, the wine enters a new phase of ageing, whereby the dosage starts to integrate into the wine, and complexity increases further. Most notably, Maillard flavours develop thanks to the dosage, and – as time passes – the wine takes on a roundness and fullness. All Nyetimber wines receive at least three months of post-disgorgement ageing before release, to enable these flavour and texture characteristics to arrive, but these positive flavour changes continue far beyond three months, and our wines will continue to improve and build complexity for many years after disgorgement.

It’s becoming more common and/or fashionable for producers to release disgorgement dates, and some are also making bottling dates available. However, we feel it is important to release bottling, riddling and disgorgement dates. With an understanding of the flavour implications of the various stages of traditional method winemaking, you can see why the riddling date is such an important part of this trio. That is the moment that the wine moves from a horizontal position with a large surface area to a vertical position with limited yeast contact, thereby virtually halting the yeast’s contribution to flavour and texture. The interval between bottling and riddling is therefore significant to note, and also between disgorgement and when you are drinking the bottle of wine. With experience, you can start to understand how a wine has developed its specific series of flavours and characteristics.

You can find out the bottling, riddling and disgorging dates for any bottle of Nyetimber on their website: just enter the lot code on your bottle here. If you have any thoughts or questions on riddling or disgorgement, please leave a comment below.