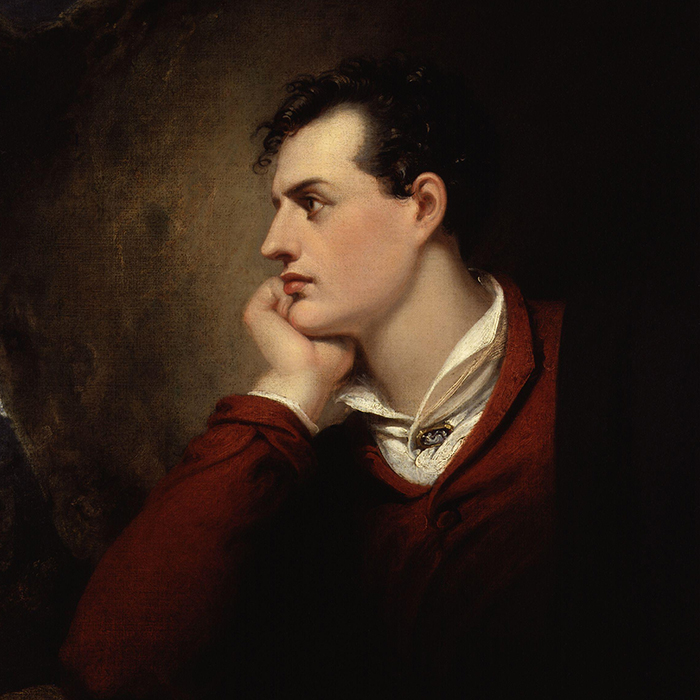 First published in the Autumn 1958 edition of Number Three Saint James’s Street, the following piece is part of a series entitled “They Came to Number Three”. In it we see how the life and works of infamous dandy Lord Byron were played out in our historic ledgers

Whether he dined heartily on steaks and three bottles of Claret, or made do with a “damned anchovy sandwich” and soda water, depended very largely for George Gordon Byron on the verdict of a pair of scales.  All his life he skirmished with encroaching corpulence, submitting himself to an astringent diet to keen his figure to the required romantic proportions.

Limping his way through boyhood and adolescence, he was bitterly conscious at an early age of the importance of his own appearance; in addition to his poetic genius, it was a blend of good looks and personal magnetism, laced with a brooding Celtic melancholy, that enthralled London fashionable society and made Lord Byron a legend of his own lifetime. Bearing in mind his horror of overweight, his first visit to Number Three St. James’s Street as a youth of 17 must have been an occasion of severe shock, for on 4th January, 1806, in boots but no hat, this five-foot eight-inch incipient elegant weighed 13 stone 12!

Byron was then at Trinity College, Cambridge, and had grown so fat that a former Aberdeen schoolfellow who encountered him there would have passed by without recognising him if Byron had not hailed his friend. “It is odd enough, too, that you shouldn’t know me,” said Byron with a characteristic touch of melodrama. “I thought nature had set such a mark on me, that I could never be forgot.”

Sorties up to London with his friends to explore the demi-monde and gambling hells – one of the most fashionable of which was at 5 Pickering Place – also made him a familiar figure in St. James’s, and in the summer of 1807, he returned to Number Three twice in July and once in August. Almost three stone lighter than he had been on that last disconcerting occasion, we can imagine Byron’s delight hen the scales registered him in his shoes at 10 stone 13 on 8th July. In a letter he wrote a week later from the Gordon Hotel, Albemarle Street, to a lady confidante, Byron expresses disarming satisfaction at his reduced weight.

“I am here in a perpetual vortex of dissipation (very pleasant for all that), and strange to tell I get thinner, being now below eleven stone considerably… One thing I do not regret, which is having pared off sufficient quantity of flesh to enable me to slip into an eel skin, and vie with the slim beaux of the modern times; though I am sorry to say, it seems to be the mode among gentlemen to grow fat, and I am told that I am at least fourteen pound below the fashion. However, I decrease instead of enlarging, which is extraordinary, as violent exercise in London is impracticable; but I attribute the phenomenon to our evening squeezes at public and private parties.”

Nevertheless, Byron was back again at Number Three on the 23rd, possibly just to make sure he was not to pay for recent evenings of dining and wining in pounds avoirdupois. This time, he weighed 11 stone and on 13th August, 10 stone 11⅟₂.

The summer of 1807 saw the publication of Hours of Idleness, Byron’s book of juvenilia, which on the whole was well received by the critics and sharpened his appetite for public acclaim. By 1808, the poet’s debts mounted to £12,000, and he began to talk of going abroad. In May, just before he entered into his inheritance, he was weighed again at Number Three, totalling 11 stone 1. The following year, he was still talking of going abroad, but this time more urgently, and he finally sailed for Lisbon with his friend John Cam Hobhouse and his valet, Fletcher, in July. He found time, however, to pay a visit to Number Three on 10th June, when he weighed 11 stone 53∕₄.

Byron did not return to London until July, 1811; he took rooms at Reddish’s Hotel, St James’s Street, where Robert Charles Dallas, his distant kinsman and literary watchdog, came to visit him on the 15th. Self-consequent and rather fussy, Dallas was nevertheless better equipped to assess the value of his young relative’s work than Byron himself, and it was this visit that eventually led to the publication of Childe Harolde. The poet told Dallas he had written a satire, Hints from Horace, while abroad which he airily supposed would further his literary reputation.

“I had chosen the hour of ill for my visit,” writes Dallas, “and we had hardly any time to converse uninterruptedly; he therefore engaged me to breakfast with him the next morning.”

Why there was no time to “converse uninterruptedly” is not clear, but it is possible that Byron was not in the mood for his earnest friend’s brand of conversation just then. While Dallas was furrowing his brows over Horace, therefore, the proud author may well have been strolling along to Number Three to check up on his weight and seek there more entertaining company than his literary adviser, because the records certainly five him credit on that day for a svelte 9 stone 111/2.

Next morning, Dallas expressed discreet disappointment in Horace, and asked if there were nothing else his friend had written. “Some short poems, besides a great many stanzas in Spenser’s measure,” answered Byron. He added, with studiously studied indifference, “They are not worth troubling you with, but you shall have them all with you if you like.” Thus did Dallas come by Childe Harolde’s Pilgrimage, which, according to him, Byron took from “a small trunk.” Dallas was hard put to convince Byron of Childe Harolde’s worth, and this is easier to believe when we recall that an acquaintance whom Byron had met while abroad (possibly Lord Sligo) had condemned it severely. Particularly vulnerable to slights and unfriendly criticism as he was, Byron may have been reluctant to expose to the world’s gaze stanzas – containing so much of himself – that had already been contemptuously dismissed.

At the same time as Dallas was devotedly shepherding Childe Harolde into the hands of John Murray, the publisher, Byron was back at Newstead Abbey, and in the doldrums. On 1st August, his mother had died of an apoplectic stroke: “Oh, Mrs. By,” mourned Byron, “I had but one friend in the world, and she is gone!” A cry from the heart, perhaps, but scarcely consistent with the frigid note Byron had sent to his mother from St. James’s Street, nine days previously: “You will consider Newstead as your house, not mine; and me only as a visiter.” [sic]

Byron, in fact, had never liked his mother. Overblown, violent, coarse, her waspish words of “lame brat” and the like had darkened his childhood. But he was linked to her by the ties of blood and an affinity of temperament, for her moods, too, swung abruptly from gaiety to despair. And his morbidly romantic sense of family that convinced him he was doomed because the tainted blood of the Gordons and of the “mad, bad Byrons” coursed through his veins, could have made him grieve her death sincerely. He did not love her, but she had survived in the same emotional jungle as himself.

After a period indulged in melancholy at Newstead Abbey, the poet moved to London again in October, and took up residence at 8 St. James’s Street. In November, he was invited to dinner at 8 St James’s Street. In November, he was invited to dinner at Samuel Roger’s house in St. James’s Place. Dry, spinsterish and observant, the banker had never met Byron before, and his eye mist have kindled with delighted curiosity when he beheld this pale, curly-headed, shy yet friendly young man limp forward. As guests sat down to the table, Lord Byron was asked if he would take soup. No, he never took soup. A little fish? No, he didn’t take fish either. Perhaps, then, some mutton? He did not eat mutton. What about wine, now surely-? Lord Byron never took wine. What did Lord Byron take? “Nothing but hard biscuits and soda water,” was the austere reply. But Rogers had not envisaged a demand for either, so his Spartan guest made do with potatoes soused in vinegar. What Rogers did not realise until later was that once the evening was over, Byron nipped smartly round to his club in St. James’s Street and set to on a hearty supper, washed down, no doubt, with an equally excellent wine!

On 10th March, 1812, Childe Harolde was published, and Byron awoke one morning in St. James’s Street – just a few doors away from Number Three – to find himself famous. The first edition was sold out within three days, and all the glittering society of fashionable and aristocratic London clamoured for Byron’s company. Childe Harolde was avidly read by people in all walks of life, and “fan” letters from complete strangers flowed in. With his instinctive sense of showmanship, Byron at first felt flattered, then irritated and finally – hunted, by this overwhelming adulation from people who claimed “they alone could understand his unhappiness” and so on. He was, in fact, the prototype of the modern romantic idol, who today is pursued by yelling teenagers and braves the danger of being accidentally torn to bits by his adorers.

The tragi-comedy of his affaire with Lady Caroline Lamb increased Byron’s “trapped” complex. It was his misfortune that he involuntarily gave people the feeling, both through himself and his writing, that they and thy alone “counted”, and his good nature led him into one emotional adventure after another. The dark secret of his relationship with his half-sister, Augusta Leigh, which eventually caused him to be as much shunned by society as he had once been courted, and his strange marriage to Annabella Milbanke, “the Princess of Parallelograms,” are puzzles which still tax eminent biographers, and it is not for us here, who have presented only the lighter side of Lord Byron, to suggest a solution.

Byron the liberator, the poet, the great lover, the libertine, the eccentric, the good comrade, the haunted Celt – the complexities of his character spin on endlessly. Although there is no record that he ever visited Number Three after 1811, we feel that in some ways those earlier years saw Byron tee man at his best, and possibly his happiest. Life was still a challenge, because he had not yet swept to the heights nor plumbed the depths; he enjoyed good wine, good food (despite his diet) and good company, and when he came to Number Three he breathed an atmosphere in which he could relax and where his most urgent problem was only a question of weight.

Read other articles from the original Number Three magazine here.