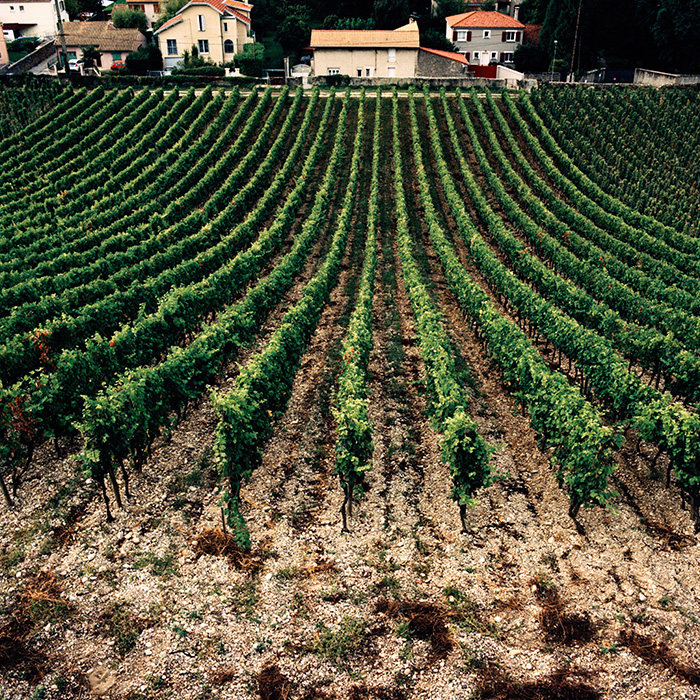 As we see the first handful of 2015s from the Rhône released, and promptly snapped up by customers, our Buyer for the region Simon Field MW reports on the auspicious vintage

Being a Northampton boy is conspicuously less evocative than being a Shropshire lad, but at least we have a first-rate rugby union team, known as The Saints, and better, dare I say it, than our football team, known, for reasons which really do not need explaining, as The Cobblers. Quite hard to really get it right in rugby, for the play to flow, for panache and elegance to shine, especially with 15 players on both sides. The same applies – somewhat tangentially, I admit – to wine, but 2015 is set to triumph in the Rhône Valley. At both ends of the valley. But enough of such tenuous analogies, let’s stick with the wine and analyse what has made ‘15 such a good year.

What one needs to avoid in such relatively southerly vineyards is too much of a good thing; too much sun and the danger of desiccated and sunburnt fruit, with alcohol levels creeping over 15 degrees and natural acidity that is far too low – 15 again, but this time in a less positive light… Such indulgence was avoided in 2015 as a result of two natural phenomena, both of which are often absent; firstly the relatively wet spring, which topped up the water table, and secondly the unusually cool nights in the hottest part of the year, which delayed the process just enough to ensure physiological ripeness and sugar levels that were not excessive. The heat was actually more pronounced earlier in the summer, with late June and early July particularly scorching, so much so that they contributed to an average mean temperature over the total growing season which was higher even than 2003. And the wines from 2003 were, and are not, noted for subtlety, longevity or, to be fair, an inherent balance.

The mitigating factors rehearsed above were, however, sufficiently significant to change the profile of the vintage and to ensure a lengthy and, to borrow a word much in currency with the vignerons when describing 2015, “easy” vintage. Easy is as easy does and few things are, in reality, that simple in modern winemaking; the philosophy of so-called “minimal intervention” is very hard to achieve after all. Like drawing a perfect circle, freehand.

What looked set to be a late year was soon revised towards an early picking date and then, with the relatively mild August, a “normal” harvest date, with the early whites picked in the middle of September and the late grapes, Mourvèdre significantly, all brought in by the end of the first week of October. It’s a good to very good vintage for whites across the piece, and an excellent vintage for reds, with Côte-Rôtie and Hermitage particularly successful in the North and the southern vineyards uniformly impressive from the higher sites in Gigondas and Vinsobres through to the Crau plateau of Châteaunuef-du-Pape. And very few ‘15s actually touched 15 degrees, even down here.

The fun bit, as always, is to ask the vignerons to rank the vintage and to select years that are or were similar. In the South the most popular answers were 2007 and 2010, maybe a little less rich than the former and a touch les tannic than the latter. Indeed, despite the relatively small berries and impressively thick skins, it is the superb finesse of the tannins which really marks out this vintage. Some have been more ambitious, with Frédéric Brunier at Vieux Télégraphe making a slightly unexpected comparison with 1985. More ‘78 to my mind; and that is praise indeed. In the North the most common comparisons are between 2009 and ‘10, with the consensus being a style that lies somewhere in the middle of these two fine years. Jean-Louis Chave mentions 1990 and René Rostaing, unpredictable to a fault, cites 1991. He feels that ‘91 was better than ‘90 in Côte-Rôtie (like ‘83 versus ‘82 Margaux perhaps) and he should know.

A very fine year, bref, and, what’s more, it is good to see, from a parlous and unpredictable economic backdrop, that the early releases of our first ‘15s have fared very well. Indeed we sold our not insignificant allocations of both Clos des Papes and Beaucastel in the first morning of their respective offers. Loyal customers, as always, were given first refusal, and very few of them were inclined to refuse. I think they were right. Fifteen looks set for the first division. Near the top.

The handful of early 2015 releases from the Rhône have almost all sold out (with just some Beaucastel remaining, here), but our full range of 2015s will be available in March 2017, with the opportunity to try the wines yourself at our tasting on 8th March.