A Spanish recipe from our kitchen 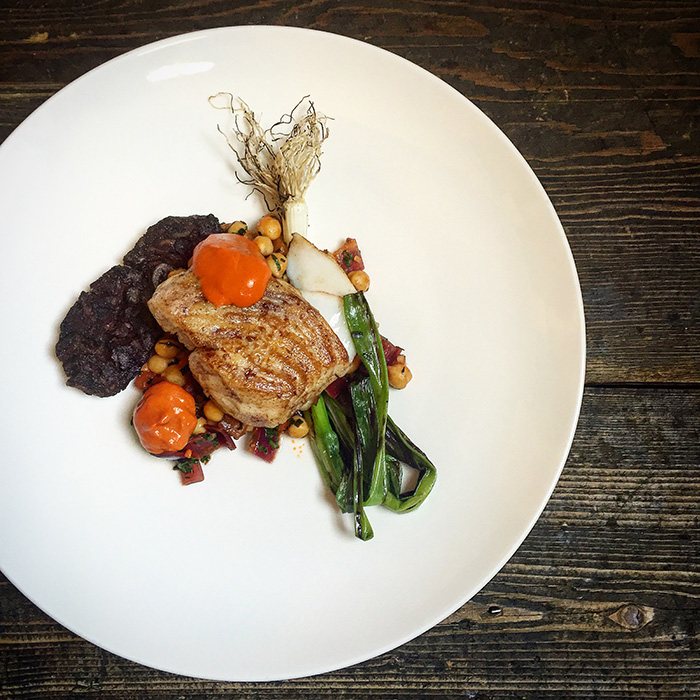 As we focus on the wines of Rioja, Rías Baixas and beyond, our Head Chef Stewart Turner takes his inspiration from the country, combining salt cod, morcilla and chickpeas in this delicious recipe.

As autumn arrives so does our spotlight on Spain and when I was asked to provide a suitably-themed recipe, I was more than happy to oblige. My grandparents came from Granada in Andalucía and only last year (for the big Four-Oh) I went on a bit of a culinary pilgrimage to the Basque Country. With its nearly 40 Michelin-starred restaurants, the Basque Country is one of the best fine dining destinations in the world. From traditional to experimental dishes, it’s all there. We dined at the world famous Mugaritz and the new kid on the block Azurmendi – modernist cuisine at its best.

Lunch is the new dinner and leaves the evening to explore the old town of San Sebastián; it’s like a culinary Tardis, a warren of bars serving amazing Pintxos, which in essence is Basque for tapas. A foodie nirvana that reveals more of itself with each visit, although this brings problems of its own; having visited your favourites and sampled the specialties of each, there is little room for the new sensations that are hidden around the next corner. It’s not really a place for the calorie-conscious. Modern touches are not exclusive to the high-end dining either; there are some great wiz-pop experiences to be had in the old town. If there was a list of gastronomic wonders of the world, San Sebastián – in my opinion – would be right up there.

This recipe is my homage to Spain and the ingredients are those that spring to my mind when I think of Spanish cuisine: salt cod, morcilla, pulses (Spain produces fantastic pulses) and calçots – a thick green onion, the season of which will start next month and that has its own festival in January.

Seared pavé of salt cod with morcilla and chickpeasServes 6

Mix the salt, sugar, lemon zest and crushed garlic; rub the mixture into the cod loin, cover and leave in the fridge for about two hours. Wash off the salt mix and pat dry, then cut into six 150g portions and return to the fridge.

Once all the components are ready, drizzle the onions with olive oil and season. Char them on a hot griddle pan, turning occasionally until cooked and nicely browned. Place the morcilla, cut-side up, on a baking sheet and cook under a hot grill for about five minutes. Place in a dish with the spring onions and keep warm.

In a large non-stick frying pan, heat a good splash of olive oil. Cook the fish over moderately high heat, turning every few minutes until golden brown all over. Add a good knob of unsalted butter near the end of cooking and baste with the foam. Finish with a squeeze of lemon juice, then place in the dish with the morcilla and keep warm.

Place a nice pile of chickpeas (recipe below) on each plate. Drape the spring onions over the top and sit the morcilla alongside and top with the cod (spoon over a big blob of romesco, if you have some).

While the chickpeas are cooking, sweat the red onion, garlic and chilli in a good splash of olive oil until soft, then add the paprika and cook for a further minute. Add the tomato purée and again allow this to cook out for a few minutes, then pour in the Sherry vinegar. Mix in the diced tomato and cooked chick peas. Cover with a lid and allow the residual heat to just start to soften the tomato.

Finish with the chopped parsley if using imminently: if prepared in advance, the chickpeas can be chilled until needed but I would add the parsley after reheating.

Explore our annual spotlight on Spain at bbr.com/spain.