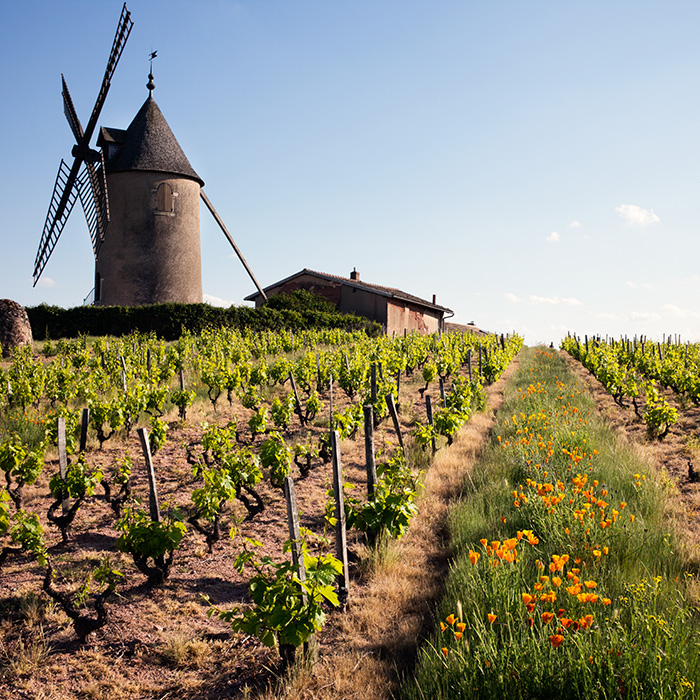 Martin Hudson MW expounds upon Gamay, the grape behind Beaujolais. Sometimes seen as a Burgundian outcast, this fruity varietal may be known for its confected Nouveau incarnation, but has a much more serious side.

Gamay is a relative newcomer to the world of wine, emerging as a result of a natural crossing between Pinot Noir and an unsung hero of the world of wine, Gouais Blanc, around eight centuries ago. Interestingly, the same coupling on another occasion produced Chardonnay, proving that reproduction in grapes is as random as it is in people. It was seized upon by the Burgundians for its resistance to disease, easy ripening, and ability to maintain fruit character at high yields, in marked contrast to its red parent. The rise in popularity of this newcomer at the expense of Pinot Noir was decried by some, including Philip the Bold, who in 1395 ordered that all Gamay vines be grubbed up by the following Easter – an edict that clearly was not followed.

Over the succeeding centuries, Gamay has found its place in Burgundy, in a supporting role in Passetoutgrains, but as the star of the show on the granitic soils of Beaujolais. The granite seems to add a backbone and weight to Gamay that the limestone soils of the Côte d’Or do not give. The Beaujolais region is split into three zones. In the south, the land is flatter, and the soils more clay based, giving the lighter, straightforward Beaujolais wines. Further north, granite hills surround the 10 villages that give their names to the Cru wines – St Amour, Juliénas, Chénas, Moulin-à-Vent, Fleurie, Chiroubles, Morgon, the recently promoted Régnié, Brouilly and Côte de Brouilly. The more rolling terrain surrounding these hills and villages, with sandier granitic soils, is the source of Beaujolais-Villages. As ever in France, any DOP region with the suffix “Villages” is regarded as having better terroir than its suffix-deficient sibling.

So what are the wines like? Common threads are an abundance of red fruits and a refreshing character with relatively modest alcohol. A straightforward Beaujolais will often be made using a technique called “carbonic maceration”. The grapes are loaded into the fermentation tank as whole bunches, under a blanket of carbon dioxide. An enzyme-driven reaction occurs within the grapes, extracting masses of fruit flavour and colour from the inside of the skins, but very little tannin. One characteristic of this process is the creation of esters that are reminiscent of ripe bananas. Eventually the grapes burst open, and a more conventional fermentation completes the process of converting the grape juice sugars into alcohol, but those characteristics of abundant fruit and colour, but very low tannin, remain. This is the essence of much Beaujolais – light, fruity and easy-drinking, the perfect summer or lunchtime red.

Beaujolais-Villages wines tend to be more full-bodied, with perhaps half a percent more alcohol and more concentration of fruit. Some producers will use carbonic maceration for part of the wine, to boost the fruit character, others will make the wine as a conventional red, with some tannic structure. The Cru wines are definitely structured, with still more concentration, and individual characters, from the floral elegance of Fleurie and Chiroubles to the more robust wines of Moulin-à-Vent, Morgon and Côte de Brouilly. These are wines worthy of aging, and capable of developing an almost Pinot-like complexity with time.

The phenomenon of Beaujolais Nouveau is perhaps slightly passé in the UK, but is hugely popular in Japan and elsewhere in the world. These wines are made from Gamay grapes picked early but ripe, fermented quickly using carbonic maceration, and immediately filtered and bottled, to enable early release, historically on November 15th, but now on the third Thursday of November following the harvest. The annual race to be the first to deliver a bottle of the wine to London, made public in 1973, was rather spoiled when in the mid-1980s the RAF used motorcycle dispatch riders and a Harrier VTOL aircraft to beat all-comers.

Georges Duboeuf is the most famous producer of Beaujolais, but there are many smaller domaines whose dedication to the cause of raising quality in the region make them worth seeking out, particularly the appropriately named Louis-Claude Desvignes, Julien Sunier, Jean-Marc Burgaud and Cédric Chignard. Château Thivin has long had a reputation for great wines, and more recently numerous Burgundian producers have fallen for the fruity allure of Gamay, notably Olivier Merlin and Thibault Liger-Belair. It is easy to forget that over twice as much Gamay is produced in greater Burgundy than Pinot Noir, so arguably Gamay is in fact the red grape of Burgundy!

Find out more about Gamay on bbr.com.