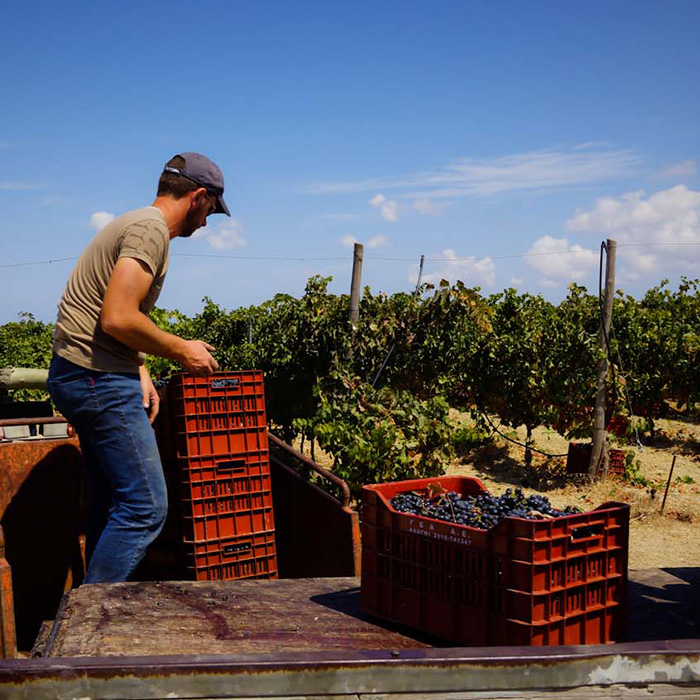 The wines of Greece have been experiencing a resurgence on our shores. While Assyrtiko and Agiorgitiko weave their way into wine drinkers’ hearts, one producer is reviving other, more obscure grapes from Greece’s past. Here, Buyer Will Heslop introduces Domaine Lyrarakis

Few producers can be credited with reviving a grape varietal on the brink of extinction – the Lyrarakis family has done so twice. This is the stuff of vinous fairytales and the grapes in question, Plytó and Dafni, have names befitting the genre. Plytó Psarades will be available from Berry Bros. & Rudd later this year, while its Dafni has graced our range since 2013. Both wines boast an intriguing back story, to be sure, but more importantly, both merit an emphatic “Ne!” (“Yes!” in Cretan Greek) in response to the question, “Is it good to drink?”

When Manolis Lyrarakis first vinified the fruit of his 1.5 hectares of Plytó vines, planted in 1991, he created a “single-vineyard” wine in the most literal sense: nowhere else on Earth was Plytó grown commercially. Where Manolis led, other Cretan winemakers followed. Previously consigned to smallholdings – its identity unknown by those who tended it, its potential untapped – there are now approximately six hectares of Plytó in production across three of the island’s estates. Plytó’s prior decline is attributed to its susceptibility to downy mildew and botrytis bunch rot, but it thrives in the picturesque Psarades vineyard, which sits 480 metres above sea-level where a steady breeze aerates its tightly packed berries. The 2015 vintage gave a particularly healthy crop, resulting in a wine that combines lively acidity with a generous, medium-to-full body, leading to a savoury, faintly nutty finish.

If Plytó’s survival seems assured, the future for Dafni appears brighter still. Again Manolis was the first to show faith in an indigenous varietal that had all but disappeared; a victim of growers’ understandable preference for the high-yielding Vilana and fashionable Assyrtiko, as well as the creeping development of Crete’s tourism infrastructure. Recognising Dafni’s appeal – it gives such distinctive wines, redolent of the bay leaf from which its name derives – was the easy part. Just think of the ambition and wherewithal then required to propel it from total obscurity to your glass in a mere two decades! There are now at least 15 hectares of Dafni under vine on Crete, and a handful on the Greek mainland.

Wine was not a way of life but one of several business interests for Manolis and his brother Sotiris when they established the Lyrarakis winery in 1966, on the outskirts of the village of Alagni in the mountainous centre of Crete. The winery’s entire output would be sold in bulk until 1992, when a proportion was first bottled under the Lyrarakis label. That change in strategy, echoed elsewhere in the Cretan wine industry, accompanied Manolis’s decision to modernise the winery and commit more of his own time to winemaking, in a rapidly successful bid to make better quality wines.

Today, Sotiris’s son Bart is at the helm. When we met recently in London (rather than Crete, sadly), Bart showed himself to be every bit as dynamic as his uncle. He spoke with pride about his family’s history and his uncle’s achievements, before introducing the newly branded range of Lyrarakis wines, including Plytó Psarades and the latest releases of the Thrapsathiri, Vidiano, Mistirio and Okto (a blend of Kotsifali, Mandilari and Syrah) currently offered by Berry Bros. & Rudd.

As we tasted together, Bart provided commentary on the characteristics of each varietal and vineyard. There could no more expert or enthusiastic spokesperson for the wines of Crete. After three hours, which passed without a glance at the clock, my mind and palate were abuzz – despite their heritage, these wines are exhilaratingly new to most drinkers, myself included.

This is no caveat, but to portray Bart and Manolis simply as romantics is to do them an injustice. Their romanticism is alloyed to commercial nouse and a powerful determination not only to build their own business, but to enhance the reputation of Cretan wines in general. They have understood that to prosper, the island’s wine industry must make the most of its USPs (a distinctly unromantic acronym), not least a raft of rare grapes. Crete is fortunate to have such remarkable grape varietals, and equally fortunate to have such remarkable winemakers.