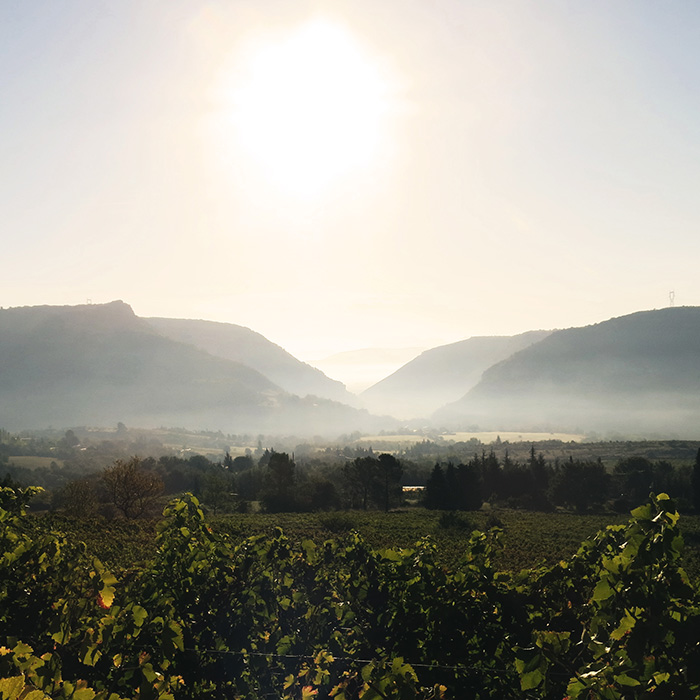 Eric Texier is a leading light in the Northern Rhône, with his traditional (whisper it: natural) winemaking techniques delivering wines which, he believes, are the equal of anything Burgundy’s Grands Crus can offer.

One might think that nuclear physics to natural winemaking isn’t a likely career path, but that is exactly the route that Eric Texier took. Today he is a leading light in the Rhône and the winemaking star who has injected life and a world-class reputation back into Brézème.

I’m chatting to Erix Texier at RAW, the natural wine fair. With an appropriately Gallic shrug at his surroundings, “These young kids,” he says, “they think natural is a new thing”.

“To make traditional, and I mean real traditional, it’s the exact same thing as making natural. I don’t see any difference. But I am an old man. I can imagine that the people who are now 20 or 25 don’t have any idea that 40 years ago, if you would go to Côte-Rôtie, nobody was using chemicals. No one. And they were all using native yeast. And the only way they have to use sulphur was to burn sulphur in the foudres or the barriques. There was no winemaking to speak of: it was only tradition. Good natural wines: they are just traditional wines.” Eric believes that natural winemaking just means going “back to the roots”, skipping “the 40 years of modern winegrowing and oenology”, something he defines as “frugal winegrowing: simple means, low-tech”.

Texier doesn’t like having to define himself as “natural” (“I don’t like this whole natural s***.”), as he says, “I’m just growing grapes. It’s the others who are chemical growers.” He feels that there is a part of the wine trade that is really part of the food-processing industry, whereas he and the other exhibitors at RAW are “just plain farmers”.

“I would hate my Syrah to taste like Syrah… Because Syrah, you can make Syrah everywhere. Brézème you make it in Brézème, and you have to be smart enough to bring it out in the bottle.” It is this unique expression of the terroir that Eric feels make wine utterly unique, and why he believes the current trend for craft beers won’t last (“Where is the sense of place?”).

Living in Beaujolais, his introduction to wine wasn’t via Bordeaux and Burgundy’s finest bottles, but that is what – he feels – made him realise “that great wine didn’t mean great names. Because Beaujolais, nobody cares about Beaujolais. And northern Rhône, at that time, was totally unknown. You couldn’t find a bottle of Côte-Rôtie outside Lyon and maybe Paris.”

“I drank a lot of these very old style, traditional Syrahs from the Northern Rhône, and for me they were 100 percent as great as any Grand Cru from Burgundy and from Bordeaux or from wherever […] I don’t make any difference between a Morgon from Domaine Chamonard and a Richebourg from Domaine de la Romanée Conti: for me they are the same level.” Texier sees no reason why people, “wouldn’t see Brézème as a great wine from a great terroir”.

Although today Brézème is a little known corner of the Rhône Valley, home to just six producers, it has a long history of excellence: “in the mid-1800s the price for a barrel of Brézème Blanc was the same as the price of a Chassagne-Montrachet,” Eric tells me. When I ask what happened, why the region’s wines fell from grace, he offers another Gallic shrug and a resigned sigh: “phylloxera, wars – same as usual”. 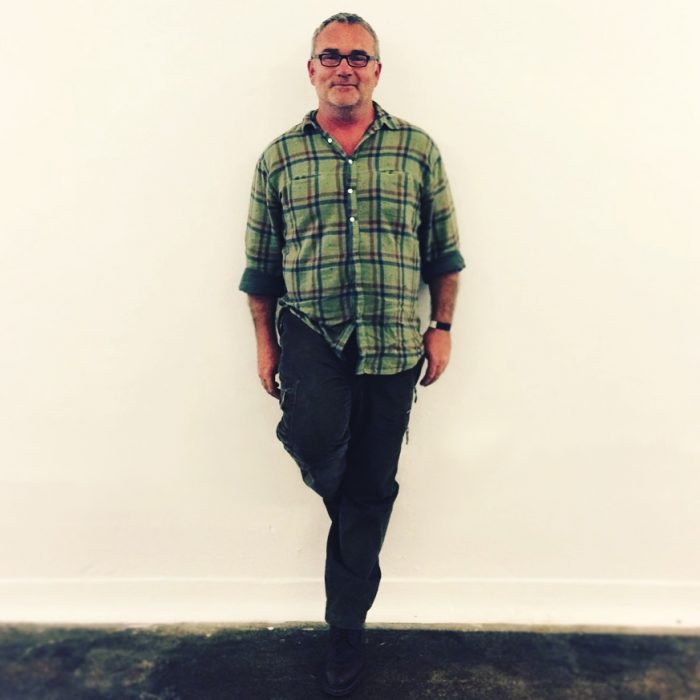 While effectively practicing biodynamics, Eric Texier doesn’t put it on his labels. He tells me that he doesn’t identify as a biodynamiste, for which he feels, “you have to believe in a whole conception of the world I don’t share”.

“I think human kind is not able to understand a s*** about nature. Biodynamie, it’s the opposite, humankind has something very unique, very special that makes humankind able to understand and to manage nature. I don’t believe that. Definitely not. I am not biodynamiste, so it would be a lie to put the Demeter tag on my labels.”

“One of the reasons I am definitely not a biodynamiste is I don’t want to use compost, and for sure I will never use compost coming from animals. Because for me, you introduce something that is totally, totally foreign to the microbiology of the soil.” His attitude is more aligned with the no-ploughing philosophy, trying to practice permaculture, as pioneered by PA Yeomans, Masanobu Fukuoka and Bill Mollison. He believes that “everything starts from the soil”, practicing “a self-sufficient agriculture, no compost, no fertilizer, minimal chemicals” with minimal ploughing and “no naked dirt” – a rather charming phrase to suggest plenty of weeds and grass between his rows of vines.

While many winemakers proudly proclaim the tiny yields produced by their precious vines, Eric defines himself as “not a low-yield believer”. “For me, ‘normal’ yields is what the vine is able to produce if it’s in good shape. In my case it’s at least 40hl/ha, maybe 50, some years it’s 60, why not 70. When people say it’s a 10 hl/ha production, I say, ‘OK, and you want me to be impressed?’ Ten hl – if you didn’t have any disease, any trouble – no hail, no frost, no coulure, you are a f***ing bad vinegrower, you don’t know s*** about farming. You don’t make 10hl/ha out of 5,000 vines per hectare, it’s totally impossible. At least one out of two vines don’t have any grapes? What the f*** are you doing there? You should change your job.”

While Brézème is where Erix Texier’s reputation lies, he started making wines in both Burgundy and the Rhône, and still makes a little Mâcon. I was curious whether he felt there were any similarities between the varietals he worked with or the terroirs. “Pinot has the best ability to handle new oak, which is absolutely not the case with Syrah,” he says. “Especially in weak years like ’08, you can use 100 percent of new oak and Pinot doesn’t care: Syrah does.”

He feels that Burgundy and the Northern Rhône are in the same family though, making wine “in the same spirit”, whereas Châteauneuf-du-Pape is a world away. While Pinot is trickier in the vineyard, in the winery “Syrah is a lot more delicate than Pinot. If you have good grapes, Pinot is amazing: you can make a lot of mistakes and still have a great wine. With Syrah, I don’t think so. Syrah can go very, very easily over the top. It’s very difficult with Pinot. I mean there are one or two growers who are doing Parker-style Pinot, because […] it’s almost impossible. To make that kind of Syrah, it’s very easy, a lot of people do it.”

Since 2009, Texier has also been farming a plot on the other side of the Rhône, in St Julien en St Alban. “St Julien doesn’t have the same history as Brézème, but St Julien was – for me – extremely interesting because the people I bought the vineyard from a sort of fundamentalist Protestant sect called Barbiste (they are something like Amish) […] So I found these vineyards that were not planted with clones, never saw any chemicals.” As in Brézème, he has big plans, hoping “to bring the St Julien terroir out of the darkness, because the soils are amazing, the vines are amazing, it’s incredible. It’s a very unique place.” If the results so far are anything to go by, he’s unlikely to fail.

The wines of Eric Texier

2014 Côtes du Rhône, Brézème: Syrah, fermented in a cluster, is richly evocative in hue and aroma, of hedgerow, red-berried fruit and whispers of spice. Succulent and sapid, there is no hint of 2014 dilution; on the contrary, the milder conditions have translated beautifully into an ensemble marked by both elegance and purity. Refined peppery tannins on the finish underline the pedigree of this almost forgotten region… almost, but not quite, largely thanks to the amiable Monsieur Texier.

2013 Côtes du Rhône, St Julien en St Alban: On the opposite side of the Rhône, the fruits of relatively young Syrah clones, this is the closest that Eric gets to a straightforward wine, with soft forest floor aromatics and a crunchy forward attack. There is a distinct intimation of complexity on the finish and in the finely managed tannins.

Browse the full range on bbr.com.

5 Responses to “The North star”