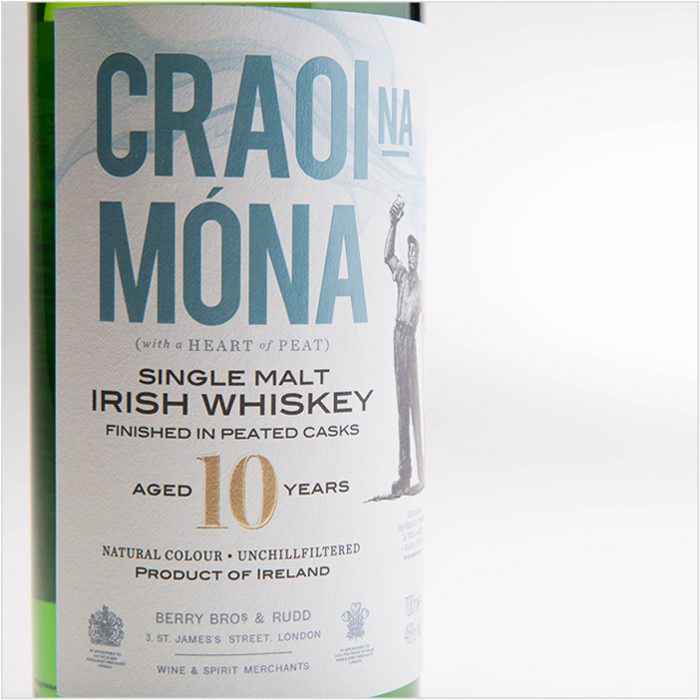 In 2007, we bottled Croai na Móna, the first Berry Bros. & Rudd Irish single malt of the modern era. It was a heavily peated spirit, distilled at the excellent Cooley distillery in County Louth that we’d aged in fresh Bourbon casks to give some wood sweetness and balance. A few years later, another batch was bottled, from the same original stock of casks, which had further aged by this time to 10 years old. This bottling exhausted the last barrels of the original spirit we’d laid down and, due to the globally increasing demand for Irish whiskey over the intervening years, stock had become significantly harder to purchase, especially the heavily-peated variant from the distillery. Happily, we managed to procure a few barrels of Cooley’s unpeated whisky that were already a few years old and, as we’d decided to bottle our next iteration of Craoi na Móna at no less than 10 years old, we had a little while to consider our options.

As we watched (and tasted) the spirit mature, we came across some freshly emptied casks that had previously held Laphroaig single malt. These barrels absolutely reeked of pungent peat, so seemed ideal to be used as “finishing” casks. Finishing is a process of additional ageing where a spirit spends time in a particularly characterful vessel and is imbued with aromas, flavours and textures that complement those already developed during its “normal” maturation. Just after the unpeated casks of Cooley had passed their 10th birthday, we tasted them, deemed them ready and shipped them over to Scotland before transferring the contents to these ex-Laphroaig casks. Due to the remarkable intensity of these barrels, the whiskey took on a peaty perfume extremely quickly and, after two months, we felt had reached a point where the balance was just right. The deftness of the smoke had reached equilibrium with the elegance of the glorious Cooley malt.

Palate: Very smooth with some sweetness building to control the peat-smoke and medicinal notes. Peaches and cream, orange citrus and rosehip.

Finish: Quite long, smooth and moreish.