A taste of Bordeaux: canelés 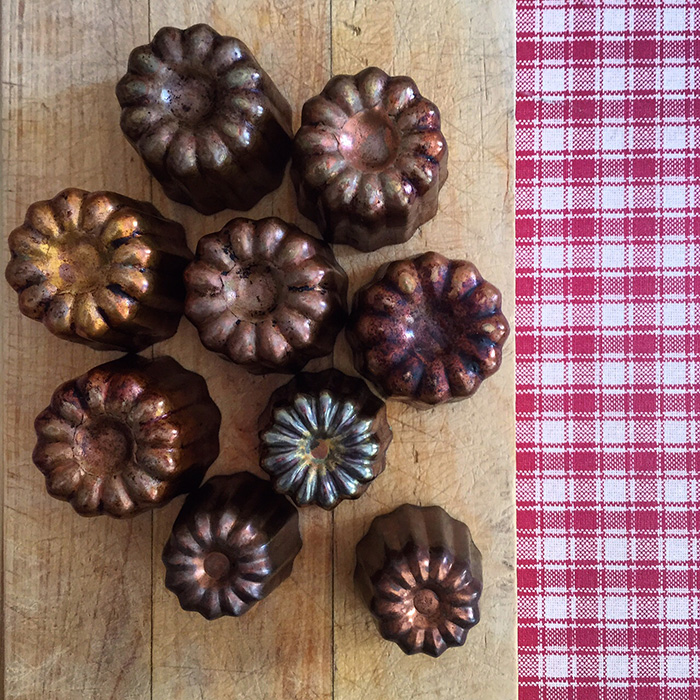 On the table: These little cakes are as much a part of Bordeaux as its wines, and have been in and out of fashion probably as often.  A cake with a rich custardy interior enclosed by a thin caramelized shell, they are bittersweet and fragrant with vanilla and rum. At the Waterside Inn we used to serve them as petits fours and from that first taste I was hooked. They’re fantastic at any time of day.

For this recipe you will need canelé moulds, which are classically copper but you can now find silicon alternatives that work just as well for a fraction of the price. Beeswax is used to line the moulds and is really an integral part of what makes the canelé, although I have seen recipes that just line the moulds with butter. While this is much simpler than hunting down beeswax, I’m sure would have the Bordelais up in arms. The patience of a saint is also a pre-requisite for these little beauties, as the batter really needs to be made two days in advance.

In the glass: This culinary question has an obvious geographic answer, Sauternes. For me the creamy richness of older Sauternes works well with the sweet, crumpety interior.  That’s not to say though, there aren’t other options for those who make canelés a daily habit and perhaps need more variety. Not too far from source, you could also opt for Rivesaltes Blanc. Again, the relatively low acidity and toast of this oxidised wine works well with the sugary crisp crust. Failing those options what about trying some of the leftover rum you used when making them in the first place? (Who doesn’t make their own canelés after all?)

Place the milk, butter, sugar and split vanilla pod in a pan over a medium heat and bring to the boil. Once the sugar has dissolved, remove the pan from heat and allow to cool while you deal with the other ingredients.

Whisk the eggs and yolks together really well, sift the flour and add the salt. Strain the milk mixture through a sieve, keeping the vanilla pod. Once cool, combine the eggs and the milk mixture. Whisk in the flour a bit at a time until you have a smooth batter. Sieve into a clean container, add the vanilla pod and the rum, then cover and refrigerate for 24 to 48 hours.

A couple of hours before you want to cook the canelés , melt the beeswax and oil over a gentle heat. Brush the moulds with the wax and allow to set. Preheat the oven to 200?C.

Give the mixture a good whisk and remove the vanilla pod. Fill the moulds to within 2mm of the top and bake for about 30 minutes. Turn the tray through 180 degrees and drop the oven temperature to 180?C. Cook for a further 25 minutes, or until dark golden.

Turn out onto a cooling rack but leave in the mould for about 10 minutes, then remove the mould & serve.