They came to Number Three: The Royal Dukes

A portrait of Prince Augustus Frederick, Duke of Sussex, by Guy Head

Following the opening of our new events venue, the Sussex Cellar, we republish an article from our Number Three magazine on “Queen Victoria’s Wicked Uncles”; the Royal Dukes of the early 19th century, of which the Duke of Sussex (the namesake of our cellar) was one.

Nothing did more to popularise the custom of being weighed at Number Three amongst the noble and notable of George III’s reign than the frequent visit there by the King’s sons – that restless septet of Royal Dukes whom a historian has called “Queen Victoria’s Wicked Uncles”. Situated within a stone’s throw of St. James’s Palace, and but a short stroll from the glittering gaieties of Carlton House, Number Three was a natural port-of-call for under-employed princes whose full-bodied style of life gave them good cause to watch their weight. At one time or another, most of the Royal Dukes had their bulk recorded in Mr. Berry’s Weighing Books, and where no entry appears – as in the case of the Prince of Wales himself – tact rather than lack of data was probably the explanation.

If a persistent tradition of Number Three is to be believed, it was one of the Royal Dukes who saved the famous scales from confiscation when they were about to be removed by an overzealous official for failing to comply with Government regulations. The law required all such weighing appliances to be marked with the Government stamp, but the mighty beams of Mr. Berry’s scales obstinately refused to be impressed with the stamp of authority. At the prospect of losing such a treasured possession of the business, the proprietor of Number Three was understandably distraught, and it was during this painful scene that the unidentified Duke entered – for the express purpose, so the story has it, of ascertaining his weight. When it was explained to him that the weighing equipment was being taken away as a safeguard against fraud, His Royal Highness exclaimed: “Who dares to say that my old friend Berry is guilty of fraud? Leave those things here and let me be weighed. I will be responsible.” Royal prerogative was still a formidable personal force and the scales remained to measure the avoirdupois of many more generations of dukes and distinguished commoners.

With which of the Dukes should we identify this unnamed champion of the scales? If personal requirement be the criterion, then the most likely protagonist is Frederick, Duke of York, second son of George III – that unlucky Commander-in-Chief whose exploits were irreverently immortalised in the song about the ten thousand men being marched to the top of the hill and marched down again, and more reverently in the Duke of York’s column that now stands the length of Pall Mall from Number Three. Between 11th February, 1788, when he weighed 13 stone 10 in plain frock, and 10th September, 1800, when he turned the scales at 14 stone 8 ½ in shoes, the Duke of York called in to try his weight no less than fifty to sixty times.

It is easy to be too censorious of the excesses of the “wicked uncles” in the sober-sided mood of our own day, but even amongst the original Mr. Berry’s customers there must have been much head-shaking and tongue-wagging at some of the activities of the King’s second son. Starting in 1787 with a surrender to the seductions of Carlton House that undoubtedly helped to bring on his father’s first serious attack of madness, and culminating in 1809 in a scandal of national proportions when his former mistress, Mrs. Clarke, charged him before the House of Commons with complicity in her promotion-by-bribery enterprise, the Duke’s career was primarily a trail of debauchery, disappointed hopes – and, of course, debts. The Royal Dukes brought prestige to Number Three, but it is doubtful whether they deigned to pay their bills.

Or might the anonymous Duke who stood by his “friend Berry” have been William Henry, Duke of Clarence, who ascended to the throne after the death of his two older brothers as William IV the “Sailor King”. This prematurely becalmed sea captain was one of Number Three’s most faithful clients – and violent enough in his ways on occasion to have dealt brusquely with any petty officer of the law.

When the Duke of Clarence first tried his weight at Number Three in 1790, he had already lost his command at sea by flagrantly disobeying Government orders, and was about to embark on a long period of inactive domesticity. He first set up house at Richmond with a certain Miss Polly Finch, where Mr. Horace Walpole gleefully observed him shocking the sensibilities of suburban society, and then winning their forgiveness by a well-regulated way of life that included no more than four glasses of wine at dinner. When Polly palled, the Duke took up with an actress called Mrs. Jordan who presented him with no less than ten illegitimate children – something of a record even for a “wicked uncle”. Unmarried bliss seems to have suited him, for he put on well over two stone in ten years, being entered at Number Three in 1900 as “13 stone 7 in boots”. The Duke finally discarded Mrs. Jordan in 1811, stirring up yet another of those public scandals at which the Royal Dukes were so adept, and entered a more active phase of life. While at the Admiralty, this lifelong friend of admirer of Nelson did much to sweep aside outmoded naval ideas. Then came the day in July, 1830, when crowds assembled outside Number Three to cheer the newly proclaimed King William IV on his way into St. James’s Palace – with a kiss from a street-walker outside White’s Club to seal the people’s benediction.

Some claim to the title of Mr. Berry’s defender can also be made out for Edward Augustus, Duke of Kent, father of Queen Victoria, whose mother he dutifully married in 1818 after spending 27 happy years with a French-Canadian mistress. How strong a claim depends on which of the Duke’s contrasted traits we thing would be uppermost in such a situation – the pleasant personal disposition that enabled him to cohabit so harmoniously with Mme. Saint Laurent, or the almost fanatical respect for spit-and-polish that made him hated by the men he commanded in Canada and later provoked a mutiny when he was ill-advisedly appointed Governor-General of Gibraltar. When he called at Number Three in 1814, four years before the dynastic marriage that regretfully parted him from Madame, he weighed 16 stone 8 ½ in boots. One of the rules that had irked the soldiery of Gibraltar beyond endurance was a ban on entering wine shops; but the Duke himself shared his brothers’ taste for good living and a mountain of debt was the main preoccupation of his closing years. 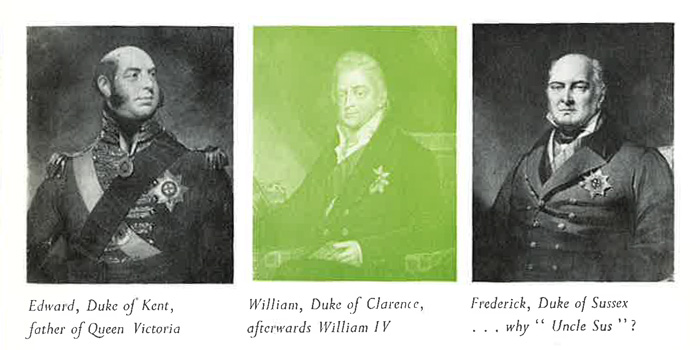 If force of character be our clue for discovering the identity of Mr Berry’s protector, then Ernest Augustus, Duke of Cumberland, merits consideration. Intensely disliked on account of his High Tory principles, and for long suspected of murdering his valet (though the legal evidence suggested it was the master who was nearly the victim), the Duke of Cumberland is described by Roger Fulford in his Royal Dukes as the only one of the septet “who harnessed his gifts to a definite purpose and drove them brilliantly and unscrupulously in an effort to triumph over the principles of progress.” The writer describes him as very tall and very thin” – a picture which we can fill out by observing that he weighed 13 stone 7 in plain frock and boots when he visited Number Three in 1799, the year of his maiden speech in the House of Lords. So orgreish an aspect did this battle-scarred Duke assume in the British public’s eyes that it was probably fortunate for the monarchy that Salic Law took him to Hanover to reign, while the throne at home passed to the young Victoria.

Judged by graciousness of character, George III’s youngest son, Adolphus Frederick, Duke of Cambridge, might well have been the one to intervene on Mr. Berry’s behalf. The most popular of the brothers, and the most virtuous in his private life, the Duke turned the scales at exactly 14 stone when first weighed in 1804. A quiet period of residence at St. James’s Palace and Windsor was followed by many years as Governor-General in Hanover. He made a visit to England in 1833 to be treated for gout, and again in 1825 bringing his son, Prince George; he called at Number Three on both occasions, and on the second visit the weight of the six-year-old prince – one day to be a noted Commander-in-Chief of the British Army – was duly recorded.

If our search for the “missing Duke” has so far omitted Augustus Frederick, Duke of Sussex, that is because his connection with Number Three is shrouded in its own special mystery. Whilst for some reason he does not figure in the Weighing Books, tradition associates the name of “Uncle Sus” more closely with the Berry family than that of any of his brothers. The memory survives of a period when he visited Number Three more frequently than business alone would seem to explain, and his fondness for the premises may be attributed perhaps to some more intimate interest that would account for the avuncular prefix in the family’s subsequent references.

Should this tradition have any substance, the Duke of Sussex would seem to be first favourite for the role of protagonist in the incident of the scales. Described by Fulford as “the most consistently Liberal-minded person of the first half of the 19th century,” he would certainly have been quick to stand up for the citizen’s rights, particularly if that citizen happened also to be – shall we say – a guardian of the Duke’s interests.