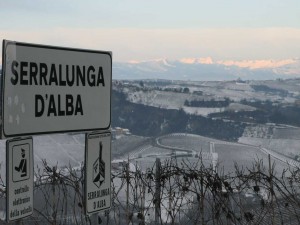 Against the backdrop of Berlusconi’s Houdini escape and subsequent civilian unrest along Rome’s ancient streets, there’s marked discontent in the Langhe hills at the way another such imprenditore (businessman), Oscar Farinetti, is conducting his affairs. As managing director and transitory custodian of Fontanafredda, the historic cantina/institution once belonging to Italy’s royal Savoia family he has recently overseen the launch of a Beaujolais Nouveau-like product ‘Già’; one that was released within two months of the harvest.

So what? Well what’s really grating with the contadini /small wine producers of the Langhe is the way in which this product ‘Già’ is being communicated. Fontanafredda has taken a prime time, if cheap, slot on Berlusconi’s Mediaset channel – ironic given Farinetti’s supposed political leanings – to advertise an anziano, an elderly citizen, recounting how among the hills of Serralunga d’Alba they used to make a wine ready to be drunk by Christmas. The inference is clearly that Serralunga d’Alba is famous for producing light, early drinking wines. Now anyone who knows anything about the Langhe, its history and wines, will tell you that Serralunga d’Alba is treasured above all others for producing the region’s most long-lived, regal (Barolo) wines. It is the Vosne-Romanée of the Langhe region. The advert goes on to portray large oak barrels, implying an important wine requiring a long affinamento/elevage in wood yet this frivolous ‘wine’ sees only stainless steel tank to get it to the market in time. The third point of contention is that this ‘wine’ the anziano refers to was not really wine at all but ‘la Picheta’, a DIY (Do It Yourself) cheap food supplement concocted during the war years in which water was passed over the pomace (dregs post fermentation), with water and sugar added. And if it’s for warm-hearted, philanthropic reasons, to help empty neighbours’ burgeoning cellars, then perhaps Fontanafredda could go the extra mile in getting behind another earlier drinking wine Langhe Nebbiolo or Nebbiolo d’Alba; at least then it would benefit the region as a whole and not leave such a bitter taste in the mouth. 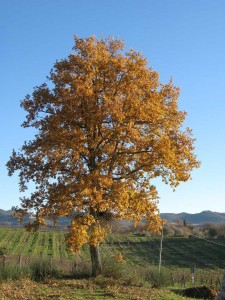 For an Italian perspective pls go to Franco Ziliani’s blog.

Harking back to my last blog, there’s news that eleven out of nineteen vineyard owners of (15ha) Cannubi – those partisans I referred to – have pulled together and taken soundings from the Bar (as in law, not downtown Barolo) to launch an appeal to thwart Signor Abbona’s efforts to blur vineyard boundaries. And conspicuously absent from the list of signatories to this noble cause is one Signor Farinetti, this time as owner of Cantina Borgogno, another historical cantina – I sense a common thread here – a cantina lucky enough to own a pezzo/piece of the original heart of Cannubi. Time to stand up and be counted methinks.

On a sunnier side, I was in Tuscany this part week catching up with a few suppliers and the latest goings-on. It seems that the Chianti Classico Consorzio, headed up by Castello di Ama’s Marco Pallanti, is tabling plans for the names of the Classico villages to be mentioned on the label. Mi sembra a step forward in celebrating and communicating Chianti Classico’s unique provenance and fine terroir. Simultaneously, for vintage 2010 only it seems, they have reduced the Chianti Classico yield by 20% to 42hl/ha to increase quality. They are also set to stop Classico owners relabeling/downgrading/devaluing their wines as ‘Chianti’.

Further south on the hill of Montalcino, there’s talk of the Consorzio now allowing the ‘Rosso di Montalcino’ wine style to be cut with up to 20% of other grapes. A logical step forward in my view, in facilitating this early-drinking Montalcino wine style to be promoted and adopted abroad, especially in the case of the volume producers. The same is applied here in Piedmont with the Langhe Nebbiolo DOC, that can contain up to 17% other varieties. However I feel strongly that such a concession, in Montalcino, as in the Langhe, should go hand in hand with ring-fencing the purity and integrity of the Brunello di Montalcino DOCG (and similarly Barolo and Barbaresco), for ever.

And on that note, may I introduce you to Signor Piero Palmucci, owner of one of Montalcino’s most understated estates ‘Poggio di Sotto’, whose elegant wines Berrys is now proud to carry: