Caspita! Cannubi – the historic heart of Barolo is broken asunder 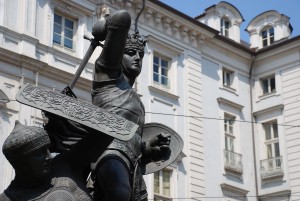 In a final dramatic scene being played out in the Langhe, Il Dott. Ernesto Abbona, President of heavyweight Barolo producer Marchesi di Barolo (1.6million bts), is cast in the Machiavellian role making a final desperate grab for vineyard rights. Pitted against him are a band of small growers – let’s call them partisans! – defending the honour of an historical site, Cannubi, row by row, bunch by bunch. The stage is set.

The ‘opera’ is of course that of the ‘Menzione Geografica’, in which Barolo and Barbaresco villages and producers have finally agreed, after 18 years of discussions, as to where vineyard boundaries officially lie. It’s a not a Grand or Premier Cru classification system but rather one that seeks to clarify a wine’s provenance in the eyes of the law. It should benefit the consumer by framing a wine’s value, guaranteeing its authenticity. So no more scope for subterfuge then…

Not quite. In 1995, at the behest of the Consorzio, the Comune of (the village of) Barolo identified vineyard limits, including that of Cannubi. It also conceded that the name of this historic single vineyard Cannubi could be affixed to smaller adjacent vineyards of Muscatel (Cannubi Muscatel), Valletta (Cannubi Valletta), San Lorenzo (Cannubi San Lorenzo) and Boschis/Monghisolfo (Cannubi Boschis); as per Burgundy’s Mazis Chambertin, Charmes Chambertin etc. Yet one man, Signor Abbona, has now ‘convinced’ the Roman authorities (the Comitato Nazionale Vini) into allowing the word ‘Cannubi’ to be written on a wine’s label without revealing the fruit’s true origins; albeit it should come from the above vineyards, in theory. So this act, passed in September 2010, effectively increases the size of Cannubi from the original 15ha single site to 34ha spread across five different vineyards.

According to Slow Food’s fine publication ‘A Wine Atlas of the Langhe’, ‘Cannubi’ first appeared on a label in 1752, prior even to the birth of Barolo! The quality of Cannubi fruit, and the silkiness of the wine’s tannins, have been revered and coveted ever since; much in the same way that Chambolle’s Musigny should render you speechless. The original Cannubi site personifies great terroir, a synergy of parts: aspect, altitude, soil, slope and situation. Lesser vineyards alongside tick some but not all of these boxes. (Cannubi) San Lorenzo largely faces north, (Cannubi) Valletta is too concave, steep and cool etc…

But why you ask does Sig. Abbona need to fight this battle when the Marchesi di Barolo apparently own 11ha of Cannubi, 75% of the site, as listed on their glossy website? By the way, the imposing fortress on their home page is not their Cantina but is the Castello di Barolo that belongs to the village. Fast-forward to 2008 and the controlling Abbona family fell out with their (Marchesi di Barolo) partners, the Scarzellos, who promptly rented out their major slice of Cannubi to a producer just down the road, thus leaving the Abbonas with all of 0.3ha of Cannubi and a big hole in their pocket. Desperate to make up the numbers, it appears that Abbona has gone for broke in requesting that his Muscatel, or Cannubi Muscatel, vineyard should be reclassified simply as ‘Cannubi’, on the questionable grounds of having got away with it in the past (when the Menzione Geografica wasn’t legally binding). Magnanimously he’s concerned that the consumer would be better-served by blending all the vineyards together under one roof ‘Cannubi’. He goes on to claim that the consumer is not sufficiently bright enough to differentiate between vineyards. And that, fundamentally, he seeks only ‘clarity, transparency, and the truth’!

The bottom line, save a last minute appeal by growers who now realise that their precious Cannubi is about to be diluted and devalued, is that from vintage 2010 consumers risk being duped into thinking that the expensive bottle of ‘Cannubi’ they’re cradling comes from the original, historic, single vineyard, when in fact it’s a blend of five…(or more?). Time to wake up and smell the coffee (or tar and roses, if you prefer).

View my interview with Federico Scarzello, Assessore del Comune di Barolo, as he explains the situation. And no, he doesn’t own any vines in Cannubi.

One Response to “Caspita! Cannubi – the historic heart of Barolo is broken asunder”