Roll up! roll up!…and meet our new star estate from the Roero: Cornarea! 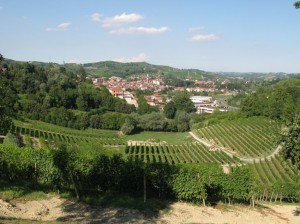 If you, like me, have a wee problem rolling your ‘r’s then exploring the Roero region just north of Alba can prove to be a tongue-twisting experience. Some would say – with a perfect roll if they’re oh-so lucky – that the Roero is best left to growing (exquisite) apricots. Compared to the orderly, monocultural Langhe region, the Roero retains an old polycultural approach to farming: apricots, maize, hazelnuts and grapes. Loosely bunched, it’s a minefield of morsels, making it a real headache for anyone trying to buy and consolidate parcels of vines – a lawyer’s dream!

Pier Franco Bovone  used to be lawyer until he gave it up to manage the commercial side of the family winery Cornarea – poacher turned gamekeeper you could say! Fortunately for him, back in 1974 his father Gian Piero had already figured out that reductive winemaking was the key to successful white winemaking and so invested in a single vineyard of 15 hectares, Villa Cornarea, overlooking the small town of Canale. He then had had the foresight to replant almost the entire hill to white Arneis, culminating, in 1981, with their first single varietal wine.

Arneis, meaning ‘tricky child’ in dialect apparently, is an ancient Piedmontese grape that up until then was only to be found littered between rows of Nebbiolo, from which it took the name ‘Nebbiolo Bianco’, on account of its similarly thick skins and (red wine like) high dry extract. Indeed so truculent was it in youth, with its propensity to oxidise, that it was mainly drank in the home or mixed with Nebbiolo to produce an early drinking style red wine for the local Torinese market (a practice that died out in 2005 with the new Roero DOCG). 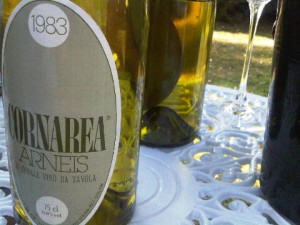 The key to Cornarea’s high quality white wine Arneis DOCG is the territorio/terroir: 30 million year old Miocene former sea bed soils rich in marine fossils and magnesium. In fact so rich is the soil in magnesium that a couple of doctors from nearby Canale made their fortune selling salt of magnesium, dug up locally, as a remedy during the late 19th century. Drinking Cornarea’s medium bodied Arneis one’s struck, not just by the fresh acidity (there’s no malolactic conversion) but by its wet stone minerality that stylistically sits somewhere between Chablis and Vermentino. And such is the significant (phenol) extract and old vine fruit that this wine should age beautifully…as a tasting of 1983 (left) clearly showed.

But Cornarea aren’t just about Arneis, for they also have 3 hectares of Nebbiolo; fruit that Pier Franco’s brother and oenologist, Gian Nicola, transforms into Nebbiolo d’Alba DOC  and Roero DOCG wines – very elegant, feminine styles, laced with silken tannins. A perfect reflection of the flour-like soils and rolling hills…