Tales of a Hong Kong diary 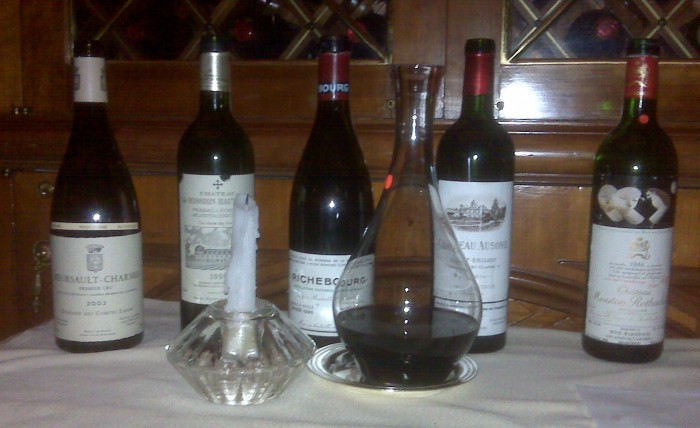 This week was one of those crazy weeks in Honkers that makes you appreciate the place and also makes you need a few days off just to recover!

Most weeks here start with a blank canvas; on a Sunday night you are looking at your outlook diary and thinking… ‘I might just have a quiet relaxing week this time round!’ Well last Sunday I was in that position, with only one blot on the copy book – a rather swanky dinner with a client on Tuesday night.

Well Monday was the usual, head down, hard grafting and a very quiet night, readying myself for the hedonistic pleasures of the next night. So it was on Tuesday evening that Nick and I (my boss and MD of BBR HK) set off in a cab to Petrus (above), a two Michelin starred restaurant at the top of the Island Shangri La Hotel. Now to call this evening a blot on the copy, or even to say that this is just “swanky”, is putting the whole evening down, as the view and whole experience at Petrus is really something very special. Our host for the evening’s generosity with wine is legendary, so we were armed with a bottle ‘95 Richebourg from Domaine Romanée-Conti (I was struggling to contain myself in the cab!), a ‘98 La Mission (one of Nick’s go-to wines) and a cheeky bottle Batard Montrachet  from Ch. de Puligny-Montrachet.

Upon arrival, I passed the wines to the sommelier with a triumphant look of a man that had just received 3 aces at the poker table, however there was a look in this man’s eye that suggested he knew another man round the table had that royal flush… and so, as I sat down, there was… 1 x ‘00 Dom Perignon, 1 x ‘02 Meursault-Genevrieres, Lafon, 1 x ‘03 Ausone…. oh and 1 x ‘86 Mouton-Rothschild. UNBELIEVABLE, our host had trumped us again (not that I was complaining!). As I picked myself up from the floor the Dom Perignon was poured.  Slightly greener and leafier than the greatest vintages of DP but still sublime and vintage I am really starting to love.

Now the beauty of Petrus is not the theatrical service or quality of food (which is both exemplary) but it does offer  arguably the finest view in Hong Kong. It just makes for evenings that dreams are made of. Now this is not a blog about “look at me and all these great wines, aren’t I great”, this does not happen very often (well not for me, perhaps the boss!), but I wanted to share my thoughts on these special wines.

I would actually say the weakest wine of the night was the ‘02 Lafon, perhaps it needed more air than our thirst was willing to give it, but it just seemed a touch angular and unwilling to flesh out on the palate, nevertheless still very serious and perhaps wanting a little more time. Next to come was the ‘95 Richebourg from DRC (we missed the Batard as we had more than enough wine for four). This was pure sleek and oh-so-fine, it had that perfect combination of the sappy puppy fat of youth and the texture and bouquet of maturity (something I am starting to find in a lot of good ‘95s). Tried once before, I always thought of this as being a touch reserved, but tonight the coat was off and it was starting to reveal itself. A stunning bouquet with waves of fruit and texture on the palate. In 2-3 years’ time this could be a bobby dazzler.

2003 Ausone is an epic, monster of a wine, make no mistake. Think Arnold Schwarzenegger in his pomp. However, even monsters can be beautiful and refined and the key to Ausone is the attention to detail, with incredible precision and complexity. One thing that did not come through was the heat of the vintage, surprising to most at the table. This opened up over the evening and it certainly wasn’t my choice of wine of the night but, by gee, it has so much potential. I can see why Mr P from Baltimore gave it the big 100. Now, to say that the 1986 Mouton was the perfect follow-up would be an understatement. From the young stallion that is ‘03 Ausone to a wine that was probably moulded in a similar fashion in its youth, but is now in its absolute prime. There is no point banging on about the different nuances that this wine brings. For me it just offered the ultimate Mouton experience of classic Pauillac style with that slightly flamboyant twist. A monumental wine that brought the table to silence and a finish that is longer than one of my blogs (yes that long!). Given the price of younger vintages I personally think this represents a bit more of a bargain. Well I can’t talk much about the food; with that view and those wines, my mind was far, far away in a world of its own. A very special night and I was very privileged to be able to experience these treasures. One should not do it too often or we might take them for granted.

Well, as I said earlier, this is about the week… so after a very tough day at the office on Wednesday (I’ll admit it, I was a little dusty), it was 9pm kick off for footie at Kings Park in deepest darkest Kowloon. I LOVE getting the MTR (underground) and wandering to the ground, it gives you a glimpse of real Hong Kong and puts Island life into perspective. Kings Park has a stunning view of the city as its backdrop, however with 98% humidity and ‘86 Mouton seeping out of me, this was not on my mind tonight. A sharp contrast to the night before, but that is what is so ace about Hong Kong.

The footie did me good (an easy win, with ‘safe hands Bilbey’ only letting in the one goal), I was in fine fettle on Thursday morning and looking forward to a quiet few days. Well that was until 10.30am when my colleague Mark Arrowsmith propositioned me with the night of nights, the party of the year in HK… oh yes, the annual CLSA Party. To be honest I had never heard of this do before, but I soon gathered that this was not to be missed and I was VERY lucky to have wangled a golden ticket (Lord knows how my colleague Mark was invited in the first place!). Well it was 8pm and myself (suited and booted in a rather punchy sky blue seersucker suit) and colleagues Rufus, Mark and Cellina flying through the streets of Kowloon on our way to Shaw Studios (the setting for tonight’s drama).

It wasn’t until we arrived that I realised just how epic these events are and something so grand and lavish that you get nowhere else.  A huge film set, dressed up to the nines with all manner of decoration.  I was in heaven! The night went like a flash, when suddenly the live entertainment for the night pops on stage… Rihanna! CRIKEY! I didn’t think this night was going to get any better but we had just hit 6th gear. I’ll be honest, I’m not the biggest fan of her music but, she is pretty damn good live and I think I am now in love. Several times I tried getting her attention across the room but she seemed not to take note of the Rodney Trotter lookalike with a Graham Norton-like jazzy suit (as my colleagues told me!). Oh well.

Before I knew it my film star-like night was over and a quick sharpener in Wanchai to reminisce was in order…. Only in Hong Kong. I knew that the next day was going to be the toughest of the week and the morning’s tasting was not my finest effort for the team! I couldn’t wait for 6.30pm to roll on so I could go home to bed…or so I’d hoped…well, it is Hong Kong and it was a Friday night.