A trip to Tuscany and Umbria 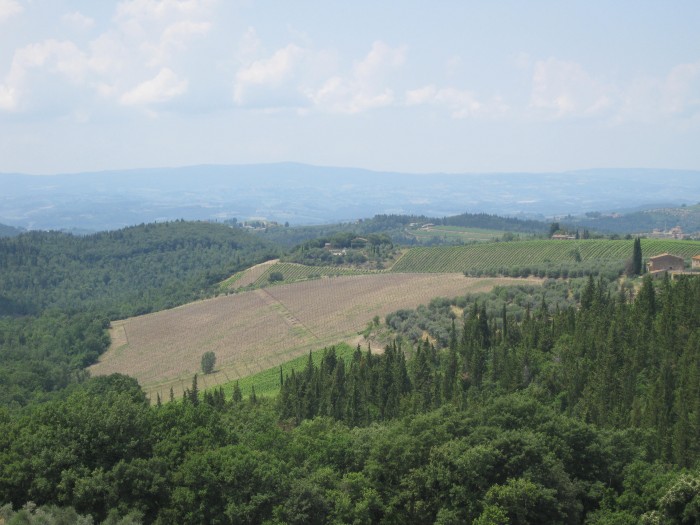 As I sit back here in shanghai looking out over a drizzly, muggy, polluted skyline I find it hard to believe that only a few weeks ago  I was ciao-ing our way through the outrageously scenic Tuscan and Umbrian countryside. Blue sky, fresh air and even fresher pasta seem like another life away.

Being into food in a big way anf eager to gain a better grasp of Italian wine, Tuscany seemed like the obvious choice for a two week epicurean and oenological fix – a few weeks and kilos later I’m glad to report that I am definitely not disappointed.

We landed in Pisa, hired a car, saw a church and then headed up to Lucca to Visit Tenuta di Valgiano. On the road, despite not being able to speak Italian, the little I’d gleaned from The Godfather and Goodfellas was enough to know that the language being directed my way, as I got to grips with Italian roads and their impressive lack of signposts, was colourful to say the least – I can only presume that in Italy knowing how to get to where you want to go is considered frightfully bad sport.

Arriving at Tenuta di Valgiano we drove through a series of very sleepy villages and were greeted by Severio the winemaker. Clearly a busy man he was kind enough to show us around. As he explained how Tenuta di Valgiano had been organic since 1997 and Biodynamic since 2002, I couldn’t help but think how remarkably different this all felt to previous estates I had visited in Bordeaux and the like – the scale here was infinitely smaller, personal and without frills, and although Tenuta di Valgiano is a very well known estate, it felt like we were beginning to venture off the beaten path.

We tasted some barrel samples of the 2009 Palistorti and Tenuta di Valgiano (their flagship wine) which are shaping up to be something very special indeed.  With its very ripe tannins and luscious fruit, the Palistorti was drinking superbly already but the Tenuta di Valgiano is clearly more structured and built for the long haul. I couldn’t resist picking up a bottle of the 2007 Tenuta for the cellar to see how it develops and as we said goodbye to Severio he planted a bottle of their Vin Santo in my hands. This was sublime and proved to be the ultimate nightcap over the next couple of weeks.

Leaving Lucca we drove to Florence, for more churches, a little culture and a lot of food. Perhaps I should mention at this point that I have a serious penchant for pasta and pizza, in fact Italian food in general, and that’s without ever having been to Italy before. So to be able to eat the freshest examples of these on a daily basis was bliss. The food really was, as one might expect, on a totally different level to anything I had tried before – sea urchin linguini, prosciutto, truffles, gnocchi, panforte – you name it we devoured it!

After a few days of gluttony seasoned with shavings of culture we arrived at Grati in Chianti Rufina. This is a beautiful estate overlooking the hills of Rufina (right). We tried a vertical of their Chianti Rufina from 1997-2008 – Classic Chianti Rufinas with unmistakable Sangiovese red fruits that offer exceptional value for money. 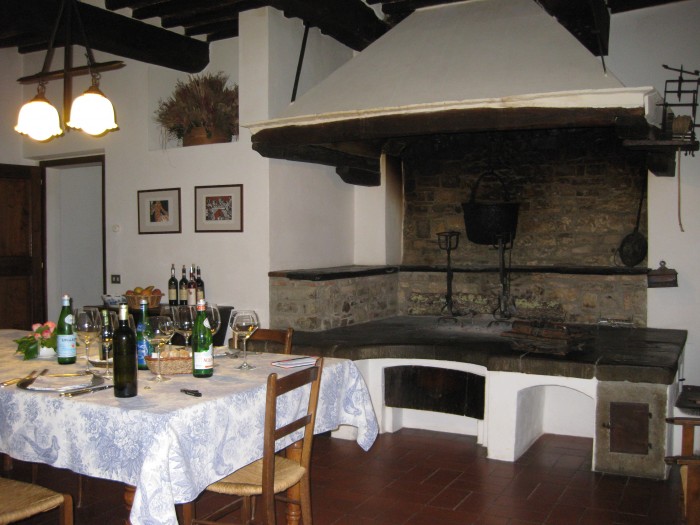 Post tasting we were treated to lunch with Cristiana and the Grati family – Parma ham, olive oil bruschetta, tomato farfalle, steak, rosemary potatoes, green beans, crème caramel. Staggering out we had to purchase a bottle of the olive oil which was too good to miss and again we were presented with a bottle of Vin Santo. Our collection of valuable cargo was growing and I was beginning to worry about our measly weight allowance on tight-fisted air – if I jettisoned some of my girlfriend’s shoes would she notice? She has a lot of them after all.

A few more churches, bowls of pasta and bottles of wine later we were well into our holiday and off to our next appointment at Fonterenza. This intimate estate is tucked away to say the least and our little Lancia hire car took a serious beasting on the rocky twisting road along to the farmhouse. As the path snaked ahead of us and the Lancia’s lawnmower-sized engine howled in protest, my girlfriend’s patience was evidently beginning to wane but with wafer thin bravado I pushed on assuring her I wasn’t lost and that all was fine. Thankfully as we rounded the next corner sure enough, there was a little farmhouse and a sign: Fonterenza.

My male pride was hanging on by a thread, but still intact. Fonterenza is a charming estate, clearly a passion verging on obsession for the two sisters (Francesca and Margherita Padovani) who labour to produce these beautiful expressions of Brunello. Production is tiny at a couple of hundred cases and as we were treated to barrel samples by Francesca it was clear that the quality of these wines is exceptional – Crystal clear purity of fruit, balance, delicacy and structure put together with laser precision. If you can get your hands on these wines I really recommend you try them.

Later that day we were booked in to visit and spend the night at Castello di Ama, so after another hearty Tuscan lunch we wove our way through the hills of Chianti until we arrived to be met by Donatella Ferrucci.  Donatella showed us around this impressive Chianti estate of 250 hectares.  With a production of 300,000-350,000 bottles, this is wine making on a larger scale but with no compromise to quality. After being shown around the estate we tasted the 2006, 2004 and 2000 Castello di Ama, (the 2004 showing particularly well especially after a couple of hours after decanting) as well as the 2009 Al Poggio, a lovely white laden with ripe peaches.

Tasting the range of wines marked the end of Donatella’s day and she offered to show us to our quarters for the night. Walking up the steps of a stunning manor house it became clear that our “quarters” were slightly different to the shoe string digs we had been staying in thus far. The fireplace was particularly impressive (below right) and deserves a special mention – it’s a serious bit of kit and I want one, I’m just not sure how to cram it into our pokey Shanghai apartment!

We were introduced to Giovanni and Paola who were the most gracious of hosts and, despite my Italian coming on leaps and bounds (I could now say – hello I am lost, which was, due to our navigational prowess, the most important phrase of the holiday) I was relieved that both Giovanni and Paola could understand my rusty Spanish. So with communication squared away, we were set to enjoy the evening.

Before dinner we explored our cavernous lodgings, with each room we walked into commanding a superlative greater than the last, I felt it prudent to keep reminding my better half not to get too used to this. This house was more in the realms of the Buffets of this world and painfully out of the reach of a lowly wine merchant.

For dinner, four courses was served with a range of wines to taste culminating in a bottle of the 1999 Castello di Ama Bellavista, which was magnificent but by no means alone. At one stage I counted 6 bottles on the table between the two of us. We retired with the remnants of the 1999 Bellavista to watch the evening sun go down over the vine stitched hills and as the frogs started croaking from a nearby lake I remember thinking that this was one of those rare moments in life of total perfection.

When we left Castello di Ama the next morning, the sun was shining and our holiday was sadly drawing to its end but we still had one last winery to visit, the renowned Isole e Olena where we were to meet Paolo de Marchi who was flying in from a hectic few days in London. Even though Paolo was operating on 2 hours sleep he still took the time to show us his state of the art winery including a very James Bond cellar. We tasted his full range including a top notch Chardonnay – full bodied, powerful and concentrated, with smoke, lemon peel, butter and chunks of minerality, a 2001 Vin Santo to die for and of course the 2005 Ceparello which I couldn’t resist getting a bottle of for the cellar.

So that was it, as we left Isole e Olena and made our way back to Pisa for the flight home. Our holiday was over, and although we were sad to go I think we both know that we will be back before too long. It was a mesmerizing couple of weeks and I would like to offer a big thank you to all the producers for making it so memorable with such generous hospitality and such enchanting wines: grazie! Now back to Shanghai life, reality and more importantly the gym!
Oh and somehow I managed to get all the bottles back which are now lying in my collection, a perfect reminder of the rolling Tuscan hills. I look forward to popping a cork and revisiting a little further down the road.