OK, The land of concrete and dust is finally come. Fittingly, I flew in on an Emirates A380, the largest plane in the world. It is an astonishing bit of kit… apparently there is a spa with showers in first class, where they will shortly be pouring our wine (first, that is, not in the shower!)… typical that the wine travels better than I do! I have to ‘make do’ with business, no shabby choice with large beds, and a very roomy bar to lounge in. The thing is just ridiculously big; I think they have to keep the upper deck pressurised even when the plane is on the ground, it is so tall. 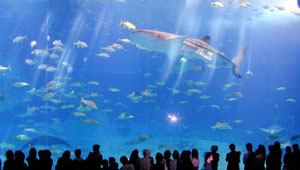 I’m a bit jealous, if truth be told. Blair is doing the Asian sales trip; as I head west he’s just leaving Seoul for Taipei, and since I’m not much of a mall junkie, I’d probably be rather hitting the dim sum, or whatever. There is something pretty perverse about having a place that is this hot and dusty when… for the vast majority… a beer is illegal. 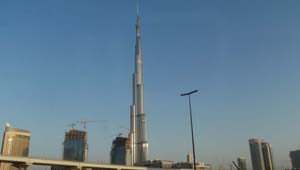 mayhem that stretches way out over the horizon and thinks two words: carbon footprint. My hotel must use a year’s worth of our electricity bill every time they open their 6 metre high glass doors to let somebody walk out into the blast furnace that is outside. We talk in New Zealand about how we can move from having 80% carbon neutral electric supply to 100% (at the cost of two or three magnificent trout rivers and a few hill ranges lost to windfarms) while these guys blow a thousand times that amount building another ridiculous shaped island off the coast to sell to a bored Premier League footballer. Unfortunately, that little scam has now gone rather sour. There is a ludicrous example of this hubris in a structure called “The World”: an archipelago of artificial islands that mimics: well, the name says it. To date only one building has been built within the entire planet. Apparently the poor bugger that bought Ireland recently committed suicide over the whole project, which is now slowly eroding back into the ocean.

What I want to know is who… on earth… when offered the choice of the whole planet, would choose to buy Ireland? He must have been well dodgy before it all went wrong.

And here lies the rub: we talk high moral ideals, tick all the politically correct boxes, yet our wines sell mostly into an earnings group where carbon footprint largely equates to how wide the back tyres on the new Porsche are going to be. So are we simply hypocrites?

I don’t think so; not sure about this one, but I’d lean towards: ”not guilty, M’lud”.

Ultimately we aren’t in business to reform others, we just take responsibility for our own doings. And anyway, if they spend enough on our wine, then maybe they can’t afford the engine upgrade on the Gulfstream and we’ll force a tiny cut that way.

I go to the tasting, a little unsure as to what wine buyers in Dubai will be like. I shouldn’t have worried: I now know where all the European A-list sommeliers go when they are bored of another gig with Gordon Ramsay. It was nice to catch up and have a gossip about who was doing what around the world eating scene. We sat in the cool of a beachside restaurant and watched a few holidaymakers lie on the beach: they weren’t so much being sunburned as steamed like a Chinese duck in the merciless oppression of a Gulf summer.

The trade’s insight into the local economic scene was interesting. Things are getting hard here, but they have a secret weapon up their sleeve. As one manager at what is certainly one of the world’s most exclusive hotels put it: “We’ve started to let the Russians come in.”

What I wanted to know most about Dubai, but nobody could tell me was: why? The whole of Dubai seems to shriek the word to me. Who on earth sold in the idea that every one of us will want to come here, holiday here, shop here, buy a house on a palm shaped island here?

“It’s beautiful in the evenings.” said one guy, hopefully. Yeah, like when the temperature drops to below the melting point of lead.

So, is this a monument to man’s irrepressible and limitless ambition, or an exercise in folly on a galactic scale? I’m not really certain.

I’ve decided to give the world’s probably largest and certainly most ludicrous indoor skiing resort a miss and will head off in the morning to Europe. Thanks Dubai, it’s been… well… huge.