Nebbiolo streaks ahead; the French connection; Timorasso and Gavi 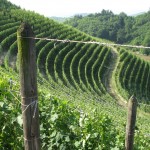 So whoosh! up went the thermometer and with it went the vines; particularly Nebbiolo, Italy’s most well-endowed in the foliage department after Sangiovese, scaling two metres high come the end of May. Two theories abound as to what to do next. Option A: slice off their punti/tops to focus the plants energy into triggering flowering early or B, bind the tips over to form a lofty hedge. Talking of which, guess who suddenly became Signor Popolare…had I found my vocation in life? Not after spending the best part of a day sweating buckets and being bitten to hell as I trimmed Sandrone’s Valmaggiore vineyard, a sandy amphitheatric cauldron of a site, located north of the River Tanaro in the Roero.
So here flowering was a full week ahead of their Langhe cousins, ultimately giving a succulent, strawberry-infused wine; a baby Cannubi Boschis if you like! To be fair I spread my talent across the region. Unexpectantly in the case of Elio Altare: a straightforward visit metamorphosed quickly into knocking off a few rows while the sun glowed on our backs. Davide Rosso concurred later on: Elio’s vineyards are a model. I had indeed felt the positive energy rising up among the lush rows. 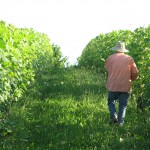 A similar vibe was sensed as I helped in Bartolo Mascarello’s Rocche di Torriglione vineyard, where Maria-Teresa chooses to bind them back into the canopy…
Alsace’s Olivier Humbrecht MW would be proud, as I recall him retaining these tendrils as antennae to the stars. 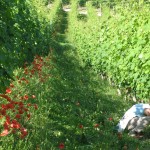 And it’s not just among the vines (guyot trained now you’re asking) that evidence of France’s imprint on Piemontese life is etched. It goes back to the 18th century and the Royal House of Savoia, whose kingdom also incorporated the stretch of land from Nice to Chambery in the Alps; little surprise then that it forms part of their dialect (the Piemontese for cherry is ‘ciresa‘) – see photo. 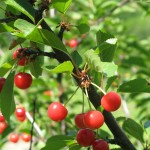 And it was King Carlo Alberto di Savoia who hired French enologist Louis Oudart to cross the Alps and create modern day, dry Barolo in 1840; and now they’re even classifying their vineyards as ‘Crus’! So if your Barolo reminds you of Vosne-Romanee, consider that Nebbiolo, like Pinot Noir, is a pernickety grape, hates heat, prefers the morning sun; produces its finest fruit on ancient Jurassic sea-beds rich in fossilised shellfish and limestone; to be vinified increasingly by small winegrowing family estates who have ‘plenty to taste if even less to sell’! Gastronomically their cucina is as good (finer, did you say?) than their Burgundian ‘neighbours’; the cow/sheep/goat cheeses as varied and smelly; their noses just as noble.

In contrast, and in no particular order, the streets are blissfully free of mopeds and turds; the coffee’s better; some might suggest that the locals are politer, interested and more helpful; and that bolshiness doesn’t translate. And in the kitchen, show-stopping restaurant sauces are the exception not the rule, while McDonald’s doesn’t have a presence let alone a signpost. Sure, Silvio lacks a beautiful singer-songwriter wife but he’s ticked plenty of other boxes, including the one promoting the national drink.

Which led me finally to Timorasso and Gavi. I say ‘finally’ because since arriving folk have been extolling the mythical white wine of Timorasso; while a visit to Gavi was way overdue.

Timorasso did indeed live up to the billing: located 90 minutes east of Alba on the edge of Lombardia and the Po Valley, the Colli Tortonesi reminded me of central northern France; the white wines hewn from the autochthonous grape Timorasso on Tortonian marl soils, bready, beeswaxy, sometimes orange blossom like with botrytis yet taut with thrilling acidity bore more than a passing resemblance to Savennieres or even Chassagne-Montrachet. 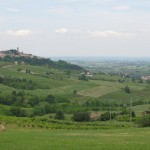 Walter Massa began to replant this ancient grape in the late 1980s after the combined efforts of phylloxera and mass plantings of Barbera post war had all but wiped it out. Now the total hectarage stands at a jaw-dropping 60ha, but Walter’s lead has inspired others to have another go. There’s still a polycultural, forgotten feel to the region but the sense of purpose among the few could well deliver a white wine on a par with Piedmont’s reds in the years to come; accompanied by some stunning cucina!

But surely Gavi’s that wine?? One look at Roberto Sarotto’s limestone white single-vineyard Bric Sassi, and seeing the plethora of fossilised shellfish littering the soils (photo) would make you think as much. 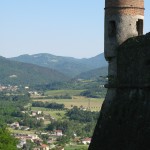 Indeed Roberto’s and those of the likes of La Caplana, his neighbour, are among the finest, most floral and ethereal around. Yet sadly not all Gavi is blessed with such soil, and Cortese ain’t Timorasso. Many of the ‘Commune del Gavi di Gavi’ DOCG villages, all 11 of them, enjoy a preponderance of heavy, iron-rich clay and sand soils giving structured, four-square wines; while yields of 70/80 hl/ha from valley floor vineyards vinified by hobbyist winegrowers are not conducive to real quality either. Still, the region’s history, its former allegiance to Liguria, as evidenced by the architecture and colours, along with a fine fort make it a great place to visit. And to show how much respect they hold for their Tortonesi neighbours: one Gavi property, Morghassi Superiore first began planting Timorasso in 1992!

2 Responses to “Nebbiolo streaks ahead; the French connection; Timorasso and Gavi”