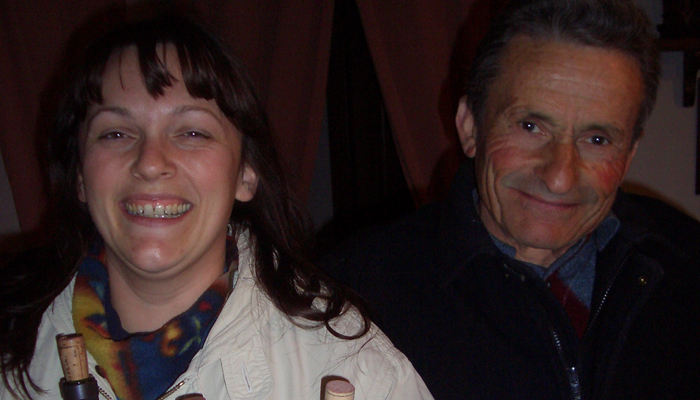 Or perhaps that should be ‘Sorelle Cigliuti…’? For on Friday eve the 5th generation of Cigliutis, sisters Claudia (left) and winemaker Silvia, came to Berrys to present 7 of their Alba wines alongside a mercurial Piemontese menu, courtesy of Chief Chef Stewart Turner.

The tiny 6 hectare & something estate sits astrid Neive’s Serraboella hill at approx 350 metres elevation, one of Barbaresco’s core villages (the others being Treiso & Barbaresco itself), rich in calcareous clay & some sand.

The wines are consequently richly structured as well as finely perfumed; the 2001 Barbaresco Vigna Erte & 1998 Barbaresco Serraboella in particular showing exceptional poise, as well as a further 5- 10 yr potential.

2003 Barbaresco Serraboella: from (45 yo) older vines, partially made in a rotofermentor & 60% in french tonneau, a fuller, weightier wine than the Vigna Erte, certainly, more licorice, less perfume at this early stage…needs 15 yrs

2000 Barbaresco Serraboella: before the dinner this vintage was held up as ‘drinking’, yet in this company it’s clearly still in a state of flux, seemingly wishing to display both the flirtateous juiciness of the 2003 & the statemanlike stature of the 1998! Luscious now but would be better in 8 – 10 yrs.

1998 Barbaresco Serraboella: 1998 was less highly rated than most of the 1995 – 2001 vintages, yet clearly this wine was the exception that proves the rule: totally together, the nose a rich compote of forest fruits, savoury, licorice, crushed minerals; the palate seamlessly composed, a weave of many fruit & savoury flavours…the potential of Serraboella shining through yet still 5 – 8 yrs ahead of it

> with Poached hen’s egg on white onion & porcini tart, shaved Alba white truffle….a brilliant match for  Barbaresco Serraboella! With such fine terreno & capable, intuitive custodians, this is clearly an estate in the ascendancy. Time to stock up on their 2004 Barbareschi!