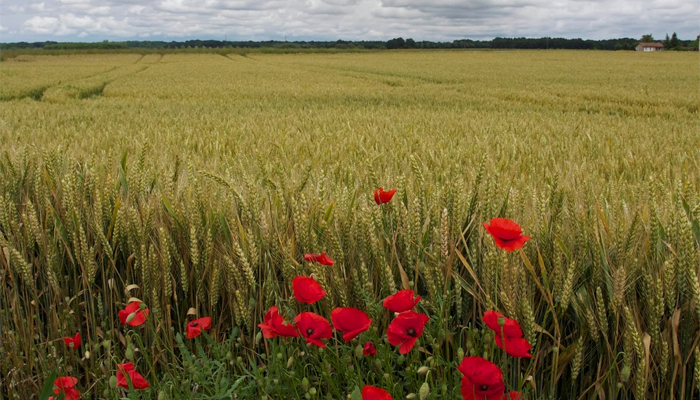 The 11th November is equally significant in France – in fact, they have a day’s holiday to mark the anniversary of Armistice Day and remember the fallen of two World Wars and other conflicts.

The holiday meant we had a slightly less frenetic wine tasting schedule and 09.00 saw us start the day’s tasting in the village of Chassagne Montrachet, chez Michel Niellon who was the first of everyone we called on that day to enquire the significance of our poppies. His village wines were as encouraging as ever and lead on to superb premiers crus, extraordinarily fine, yet luxuriant and serious at the same time. Our next visit was to the utterly reliable Domaine Michel Bouzereau in Meursault, now in the safe hands of his son, Jean-Baptiste. A really good range of wines, 2007 is clearly a great success for the whites.

As 11 o’clock approached we found ourselves in the square of Meursault, amongst a large crowd in front of the Mairie.  The Mayor, assorted dignitaries, police and a wonderfully varied looking band led by a lady who just must have been the local school’s music teacher were all present. Once the bugler, a young lad, had arrived (late) the band struck up and headed downhill to the town’s war memorial. Having wired up the council’s speaker van, the Mayor made an impressive-sounding speech, wreaths were laid, and there was a minute’s (it might have been two) silence (during which, shamefully, I forgot to remove my cap) before the ensemble marched back up the hill to the strident sounds of La Marseillaise. It was important not to have missed the 90th anniversary of the Armistice, and Meursault’s parade was as dignified and poignant as any.

Next call was on the edge of town with Jean-Philippe Fichet. We always note how spotless and well organized his cellars are and his 2007s were as impressive and full of energy as ever. We took lunch in Beaune, before heading north to what is not normally seen as “white wine country” – Chorey-les-Beaune, and Sylvain Loichet’s cellars under an impressive manor house that the family (who by fortuitous chance are stonemasons and quarriers) are renovating to the highest spec. Sylvain’s 2007 whites were especially notable – we are fortunate to have got in early with him as he has a great future.

Two more visits rounded off the day – the Domaine de la Vougeraie and their enviable array of wines from a super Bourgogne Rouge ‘Terres de Famille’ to a demi-douzaine of grands crus – all deftly crafted by talented Pierre Vincent. It was well passed dark by the time we returned to Beaune, where Joseph Drouhin’s Export Director had just arrived from Belgium to meet us. We walked for what seemed like a kilometre through their cellars and were rewarded by a very fine range of wines, finishing the day with a 1989 Romanée-St. Vivant – and no, tired as we were, we didn’t spit this one.